Is the bond in HF ionic while it is covalent in HCl?

Why would a hydrogen atom "donate" to fluorine in an ionic bond but not in $\ce{HCl}$? Why would $\ce{H}$ and chlorine share instead of $\ce{Cl}$ just stripping it away like $\ce{F}$ does?

Bonds can be completely covalent as in $\ce{Cl-Cl}$, $\ce{H-H}$, etc. In these cases the electron density is shared equally between the two atoms. Bonds can also be ionic as in $\ce{Na^{+} Cl^{-}}$ where much (~80%) of an electron has been transferred from the sodium atom to the chlorine atom. Between these two extreme cases exist a continuum of bonds that are called polar, covalent bonds. In such cases the electron density between the two atoms is not shared equally, but neither is the electron transferred extensively from one atom to the other. 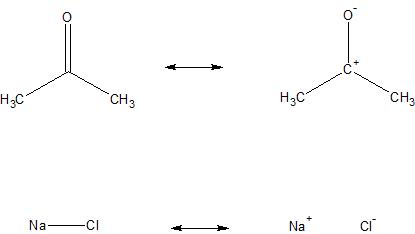 One can crudely estimate how polar a diatomic covalent bond is by using the following methodology. The dipole moment of a molecule is given by $$\ce{\mu~=~Q*d}$$ where the dipole moment is in Debye (D), Q is the partial charge on an atom measured in coulombs and d is the distance between the two atoms (the bond length) in meters.

Not the answer you're looking for? Browse other questions tagged inorganic-chemistry bond covalent-compounds ionic-compounds or ask your own question.