I've got a question regarding the (2pi+2pi)-photocycloaddition of ethene to form cyclobutane. If I understood correctly, the reaction doesn't take place under normal conditions, even if we increase the temperature because the entropy term of gibbs energy will favor more molecules at higher temperatures, so we need to use energy in form of UV light.

Additionally, as the molecular orbitals don't have matching symmetries, one of the ethene molecules needs to be excited by UV light, so one electron can enter the pi* orbital. So basically the HOMO of excited ethene A (pi*) and the LUMO of ethene B (also pi*)can form two sigma bonds needed for the cyclobutane, in addition to the already existing two sigma bonds, at the same time (concerted mechanism).

But why is it like this? Why can one single excited electron form (or basically induce) the formation of two sigma bonds only through orbitals (even though the LUMO is empty and the HOMO only has one electron)? And why is only one ethene excited and not two at the same time? Any tips would be of great help, thanks in advance. 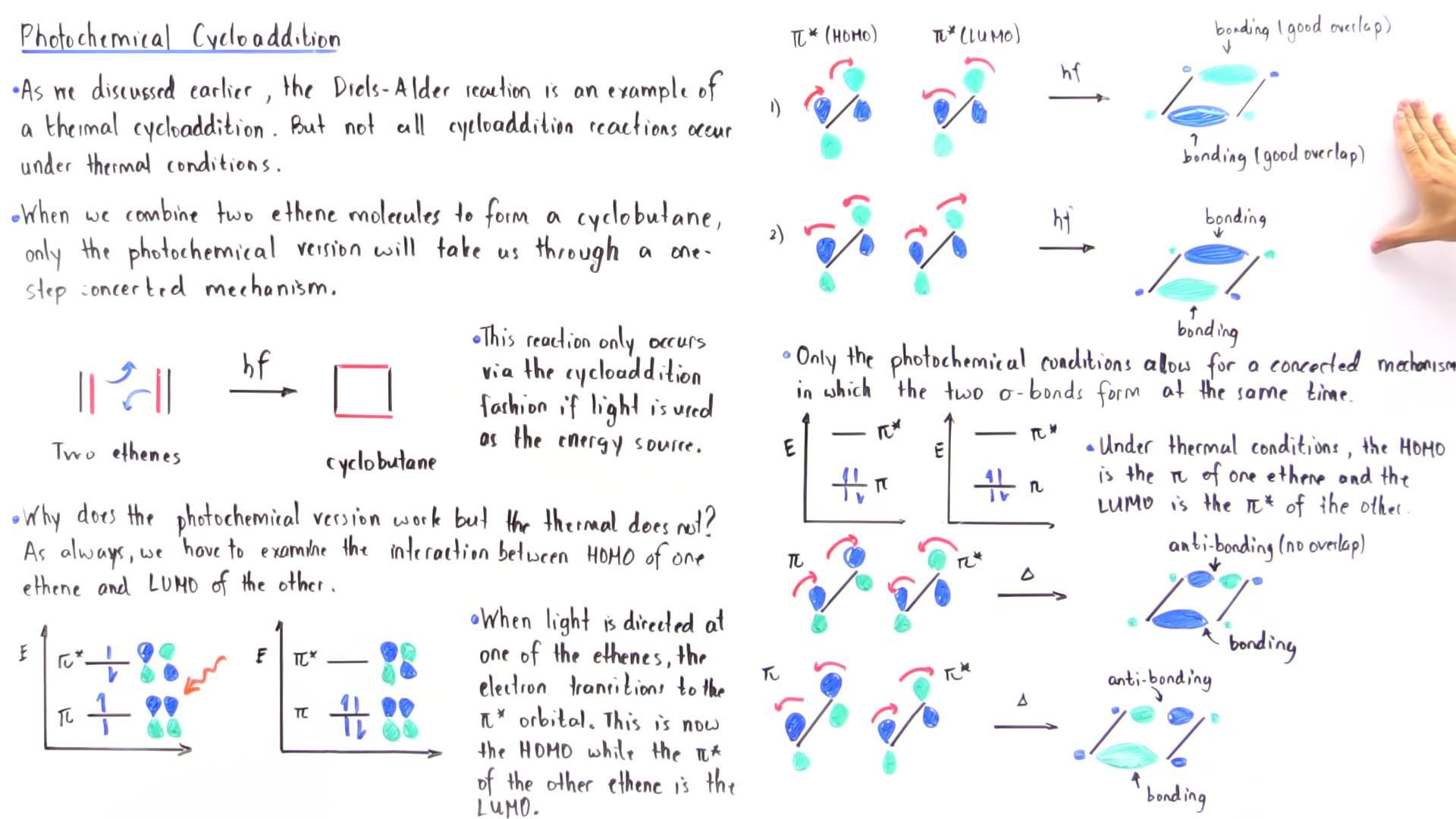 For any pericyclic reaction (including cycloadditions), the key set of rules are the Woodward–Hoffmann rules. The rules are actually quite general, but people often first learn about them in the specific context of cycloadditions*:

The full rules are way too long to explain here, so I'd suggest to look up a good textbook on it if you're interested. Clayden's Organic Chemistry is a good starting place, IMO, and if you want something more in-depth there's Fleming's Molecular Orbitals and Organic Chemistry Reactions.

Note that there is also Fukui's frontier molecular orbital theory, which in fact more closely matches the HOMO/LUMO-based analysis in your post. However, this generally sees less use than the W–H rules. You can already see that in the length of the respective Wikipedia articles. I think the Woodward–Hoffmann rules are perhaps a bit more complicated, but are more easily applied and generalised.

If I understood correctly, the reaction doesn't take place under normal conditions, even if we increase the temperature because the entropy term of gibbs energy will favor more molecules at higher temperatures, so we need to use energy in form of UV light.

I mentioned this in a comment, but this explanation is a little bit superficial. The key consideration isn't entropy, because if that were the case, then no cycloadditions should ever happen, not even thermal ones like the Diels–Alder reaction. (Basically, you can't selectively apply this argument to [2+2] cycloadditions and then suddenly forget it when moving to [4+2] cycloadditions.)

Why can one single excited electron form (or basically induce) the formation of two sigma bonds only through orbitals (even though the LUMO is empty and the HOMO only has one electron)?

The part of the system that reacts isn't just the single excited electron (that would just be a plain old radical reaction). Pericyclic reactions are quite special: they involve the cyclic movement of quite a number of electrons. So, in fact, it is not the single excited electron that reacts: it is the four electrons, three unexcited and one excited, which collectively react.

To truly understand this requires one to delve into MO theory. In particular, you need to understand molecular symmetry and electronic states: it's not the individual electron's states which matter (i.e. which electron is in which orbital†) but rather the total state of the molecule (loosely speaking, the product of all the orbitals). But I will try to give a flavour of the explanation here.

There are many possible states for the reactants: for example, we have 4u0e, 3u1e, 2u2e, ..., and likewise, the electronic states for the product are similar: we have 4u0e, 3u1e, ...‡ It turns out that, based on symmetry arguments, the 4u0e reactant configuration maps to the 2u2e product configuration, which is very much uphill in terms of energy.

On the other hand, the 3u1e reactant configuration maps to the 3u1e product configuration. Both are high in energy compared to the ground state, but relatively speaking, they are fairly close, so the activation energy for the forward reaction is not too high, and the reaction can proceed. The tradeoff is that you need to start from an excited state of the reactant, and that's where the light comes in.

If you want to go even deeper, then there is this question from a while ago which I answered: Theoretical basis behind orbital correlation diagram for pericyclic reactions. It has diagrams, symmetry labels, etc. and also introduces the non-crossing rule, which doesn't change the conclusion but makes the discussion more technically accurate.

And why is only one ethene excited and not two at the same time?

A secondary answer is that only a fraction of the molecules are excited at any one point in time. Getting two of the excited molecules to collide and react before they return to the ground state, is not likely.

* Technically speaking: cycloadditions where both components react in a suprafacial sense. But let's not go there (for now). Refer to the textbooks above for more info.

† Electrons are indistinguishable, so it's not possible to say which electron is in which orbital. But that's more of a technicality in the present context.

‡ These can be enumerated and labelled more precisely using symmetry labels.

13
Why is absorbance spectrum continuous and not quantized?
32
Why does hyperconjugation help for ring cleavage?
5
Why does mesitylene absorb at a longer wavelength than benzene (UV-Vis)?
9
How does conjugation affect reactivity?
7
When pigments absorb light only around a single particular wavelength, why aren't they still white?
3
Why is this diagram depicting the molecular orbital (MO) basis for a back-side attack the way it is?