Which of these protons are equivalent? Which NMR signals correspond to which protons?

Here are is the NMR spectrum and the compound (both images are the same spectrum, just close up). I know the deshielded signals are the aromatic protons and the ones ~6ppm are the alkene protons but the rest is a bit muddy. I'm having trouble correctly assigning the signals to make them agree with the integrations (below the signals). I don't even see 5 equivalent protons anywhere despite the integration suggesting there are. I'm also confused about the multiplicity: the signal at ~1.35ppm looks like a quintet of doublet, but I don't see any protons that would make that. Can anyone help me? 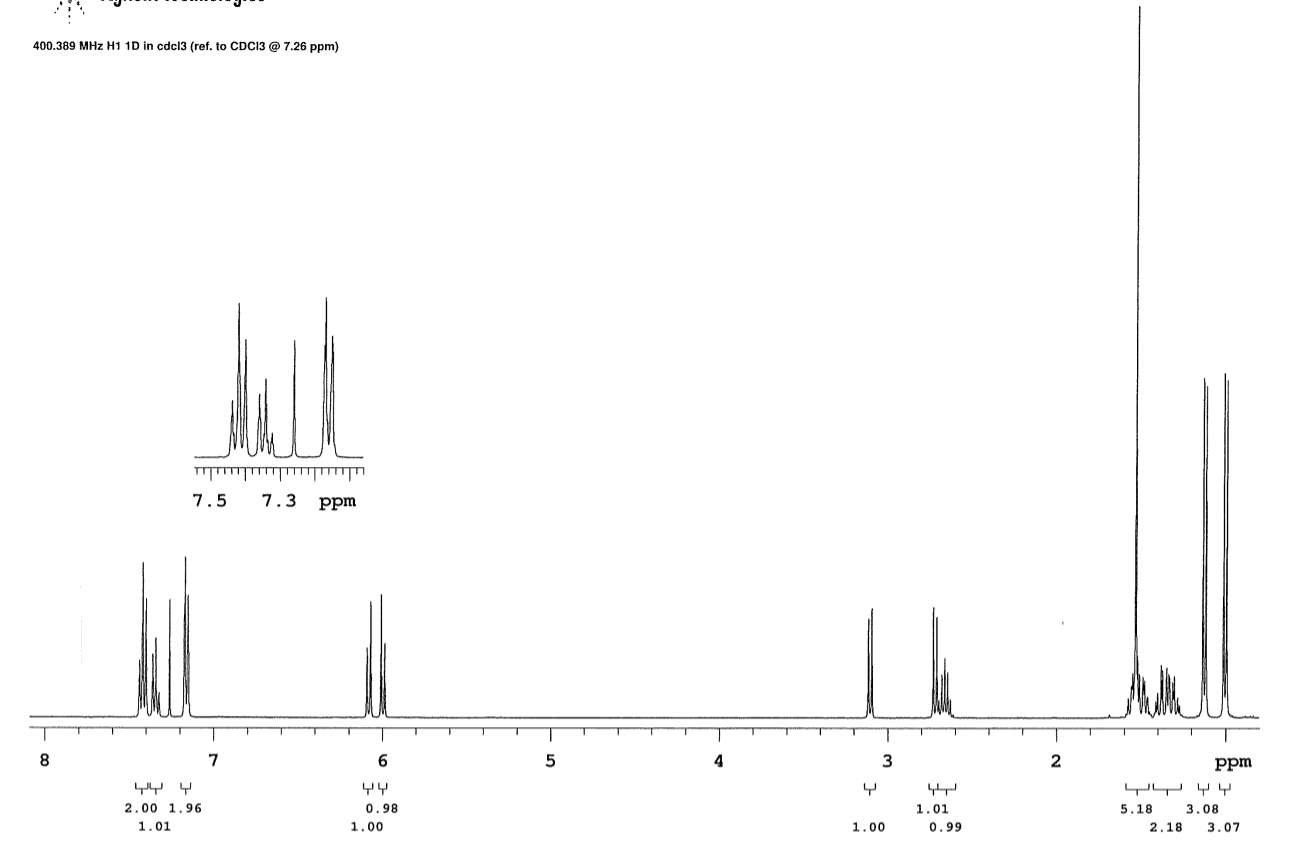 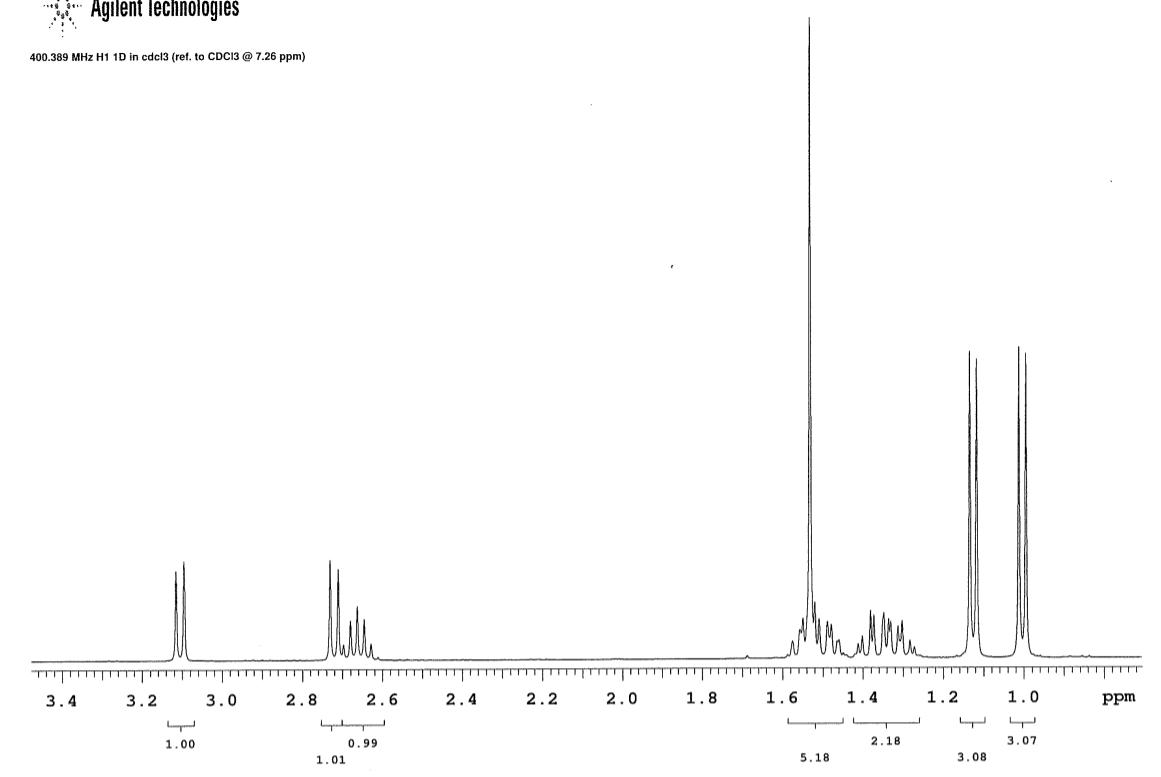 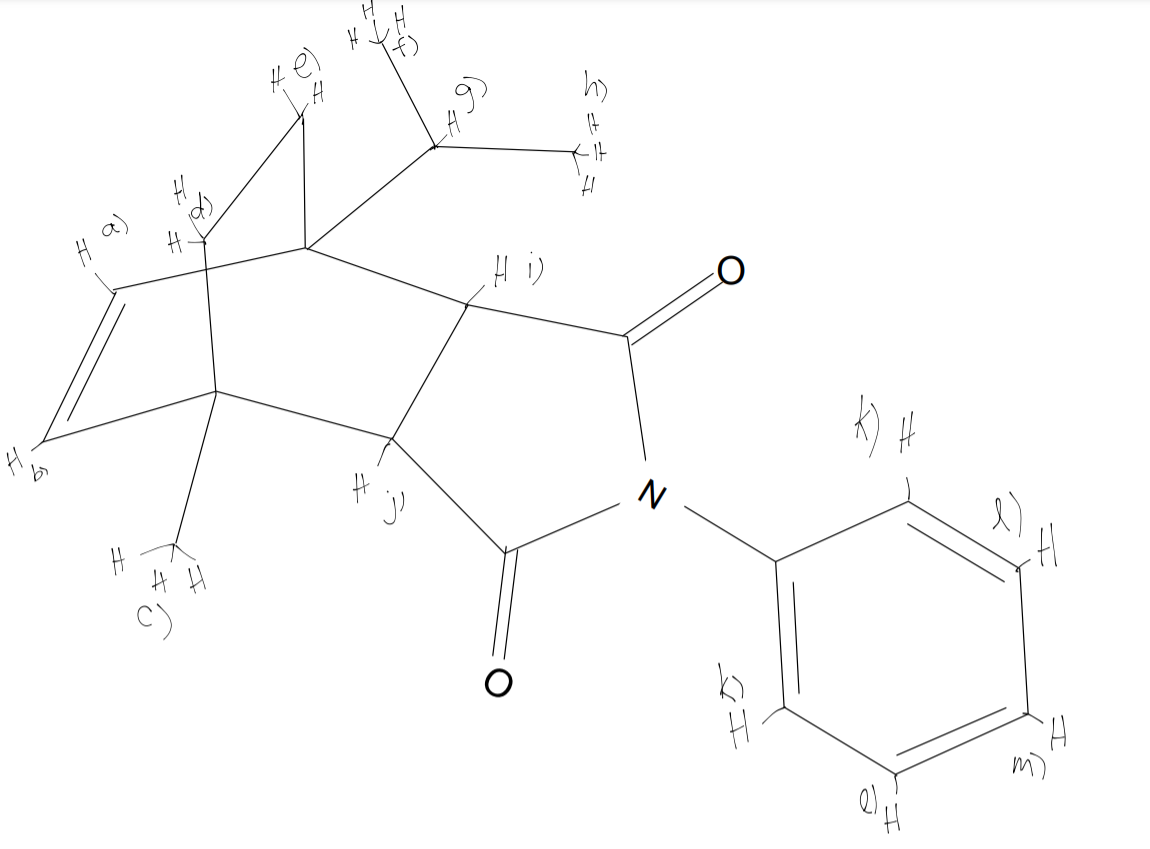 When I approach this type of question, the first thing I ask myself is whether there is a molecule-wide symmetry element present which would transform distant protons into chemically or magnetically equivalent protons. In your case, the molecule is chiral and does not have an axis of rotation so there are no helpful symmetry elements.

Next, I try to identify bonds around which free rotation is possible and which would transform hydrogens onto another.

As a sanity check at this point, I would go through protons connected to the same carbon atom and check whether I missed any equivalent ones. In your case, on the $\ce{C{H^{(d)}}2-C{H^{(e)}}2}$ remain. However, if you look at a three-dimensional structure (i.e. draw them with proper bond angles), you should see that they are not equivalent: One of the (d) protons points to the vinyl group, the other points to the succinimide. The same is true for the (e) protons. Thus, we expect four individual signals from these four protons (remember that the left and right hand side of the molecule are not chemically equivalent).

Now that we have covered all the protons in the structure, we can try to identify them in the spectrum. Of course, the phenyl and vinyl groups are easy as you have already stated. The two doublets at $\pu{3.1ppm}$ and $\pu{2.72ppm}$ with integral 1 will correspond to (i) and (j). The signal at $\pu{2.66ppm}$ that appears to be a quintet is probably a septet and corresponds to (g). The methyl group (c) must be a single peak (it does not couple with anything) so it must be in the $1.5{-}\pu{1.6ppm}$ multiplet.

We are still lacking the signals for the methyl groups (f) and (h). These must have an integral of 3 each unless they do not resolve in which case they would have a total integral of 6. Each of these signals must be a doublet (coupling to proton (g)). This narrows it down to the signals at $\pu{1.0ppm}$ and $\pu{1.12ppm}$. Given that these two are distinct, proton (g)’s signal is likely a quartet of quartets rather than a septet, but the coupling constants are likely indistinguishable which will lead to the apparent septet pattern.

Two protons (d) and two protons (e) remain to be identified. Thankfully, the area $1.2{-}\pu{1.6ppm}$ still contains an un-accounted-for integral of 4 protons. The four missing protons will be in this region. However, as they are all chemically (and magnetically) non-equivalent, they should each give a rather complicated ddd coupling pattern. With sufficient time and resources, it would probably be possible to identify the individual signals and coupling constants. However, it is probably not worth your time and I would report that area simply as a multiplet of integral 7 (methyl and bridge protons).

3
How many total absorptions would appear on proton -NMR spectrum for this molecule?

3
NMR: Most deshielded protons (electron withdrawal)
4
What happens to chemical shifts of protons close to aromatic systems in ¹H-NMR?
1
1H NMR of Acetylferrocene
7
NMR Splitting for Adjacent, Equivalent Hydrogens?
6
Slight variation in NMR integrals of CH protons vs. CH2 or CH3
7
How can multiplets in para-disubstituted benzene rings be described?
0
Why do certain signals in proton NMR experience extensive splitting despite only having 1 neighbour?
1
1H NMR of cyclohexanecarbaldehyde
11
How to assign overlapping multiplets in 1H NMR spectra?
1
Just looking for some help with finding relative ratios of components in a mixture using proton NMR