while I was studying the many side reactions of radical polymerization, I stumbled across this source which illustrates the chain transfer side reaction in polystyrene synthesis: 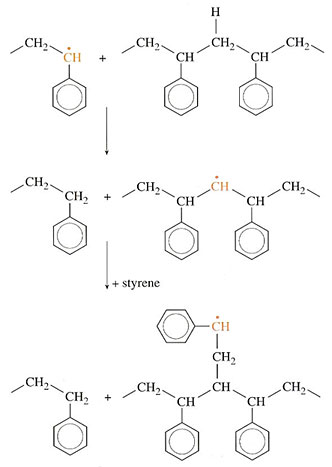 Of course, there is a typo in this picture, it shouldn’t be -CH2-H- but -CH-H-, but you get the idea. A monomer radical can abstract a hydrogen atom from an already existing chain in the first step, so that it’s radical function is forwarded to the chain.

The chain then, in a second step attacks another styrene molecule from the back side of the double bond so that the more stable, secondary radical forms, so the molecule can also form branches.

Everything alright with me, but I don’t get the regiochemistry here. In the first step,a secondary carbon atom is attacked, which also forms a secondary radical intermediate; but wouldn’t an attack on the tertiary -CH group be more favorable thermodynamically as it is a tertiary radical intermediate which is also stabilized by the phenyl group? Or is it a kinetically controlled process, where more hydrogens can be subtracted on the bridging carbon atoms, so that after the chain transfer, the bridging carbons are tertiary as a result?

Any tips would really be appreciated!

The image shown in the question can be found with some context at https://www.open.edu/openlearn/science-maths-technology/science/chemistry/introduction-polymers/content-section-4.3.3

In that document, they say of chain transfer:

This indicates that chain transfer is a rare event in a typical synthesis of polystyrene.

[...] but wouldn’t an attack on the tertiary -CH group be more favorable thermodynamically as it is a tertiary radical intermediate which is also stabilized by the phenyl group?

As this is a rare event, you don't expect any of the intermediates to be the most favorable ones.

Or is it a kinetically controlled process [...]

If the chain transfer is rare, you would expect faster processes to react with the radical intermediate faster than it forms (because these steps are less rare). This means it is kinetically controlled.

Moreover, all the steps with two radicals combining to form a bond would be expected to be kinetically controlled because once formed, the covalent bond would not fall apart into radicals (that is why you need initiator molecules in the first place).

5
How is silica bead bonded into polystyrene?
14
Thermodynamic and kinetic products - carbocation stability
0
Do you say "reduce something to polystyrene"?
0
diamine synthesis
0
Polystyrene properties after dissolved by acetone
6
Chain transfer agents and rate of free radical polymerization