If someone has some experience with lysozyme crystals I would be interested in knowing whether any of the images below seem likely to be lysozyme. Solutions were made with powdered lysozyme ($\pu{50 mg/mL}$) and $\ce{NaCl}$ ($\pu{3 M}$), except the lower left which is $\ce{NaCl}$ alone.

The top two images were made from a lysozyme solution with a small amount of $\ce{NaCl}$, then adding a piece of tissue paper. The square/cuboid crystals came out of solution immediately onto the fibers. That they are cubes suggest to me $\ce{NaCl}$ but the appearance is odd. 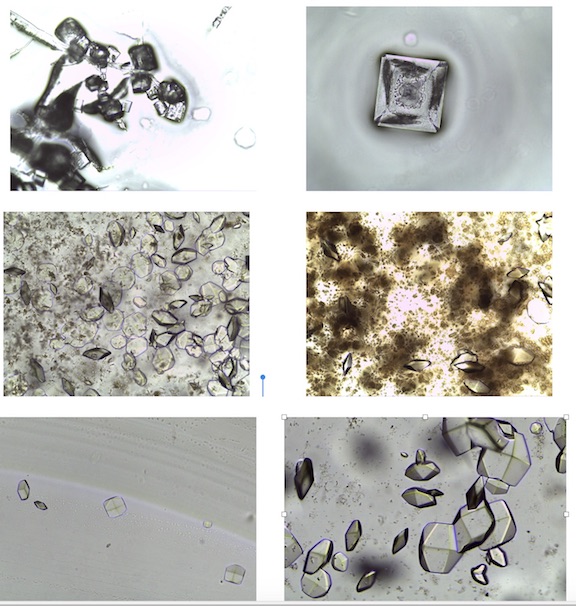 A better image of the square crystals from lysozyme/$\ce{NaCl}$ + tissue paper. 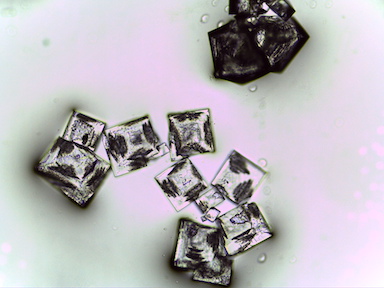 If someone has some experience with lysozyme crystals I would be interested in knowing whether any of the images below seem likely to be lysozyme.

The bottom two have the typical shape of well-grown lysozyme crystals. 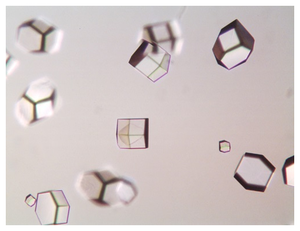 Buttonwood's answer about polarized light is spot on. 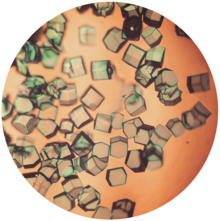 You can also add a dye. If it diffuses into the crystal, it can't be NaCl.

There is also a destructive method. If you try to squeeze the crystals with a hard object (like a needle), NaCl crystals will stay intact or break with smooth faces while the lysozyme crystals will look like smashing a watermelon with a baseball bat.

And here a paper about dye penetration with some great photos of lysozyme in polarized light: https://www.semanticscholar.org/paper/Penetration-of-dyes-into-protein-crystals.-McPherson/5d79f2f257f85163d5c14ad0967de1d4354bd1c8

The one in the top right and those large in the very last photo pretty much look like $\ce{NaCl}$. Those in the second row (left) and third row (both left and right) look different by the crystal habit's symmetry; and what could be birefringence (especially third row, right hand side) -- a plausible first evidence for protein crystals which typically crystallize in a lower than cubic space group symmetry.

The habit of a crystal (outer shape) may vary on the crystal's condition of growth. Only the angles enclosed by the crystal's surfaces remain constant for the same polymorph of a compound (Steno's law). The presence of impurities the purification did not remove, intentionally added detergents, dyes and buffers, the applied technique (e.g., sitting drop vs. hanging drop), the age of the crystals while growing may influence which faces may be seen or not (more).

Remedy: A quick and easy check is to observe the sample put between two linear polarizers/Nicols. Check if there is a polarization microscope nearby and put the dish on its table (it very well may contain the solution including the crystals). Since there is there is no birefigence for cubic $\ce{NaCl}$, you may sort these out visually. If Nicols are crossed, crystals of $\ce{NaCl}$ appear uniformly black.

It may happen that accidentally such a salt crystal still ends on the X-ray diffractometer instead of your wanted protein crystal. But these will be recognized quickly by symmetry, $d$-spacing and brilliance (compared to a protein sample) of the diffraction pattern.

Not the answer you're looking for? Browse other questions tagged crystal-structure proteins or ask your own question.

4
How to rationalise the coordination number of CsCl versus NaCl?
31
Why does pyrite form cubic crystals?
3
Do crystals have stronger intermolecular forces than amorphous solids?
1
Cubic crystals anisotropy
3
crystallinity of seed crystals
11
How to make pyramid-shaped NaCl salt crystals
3
Struvite Crystals: How does it form?