Why is it that the bigger the side-chain is, its hydrogen atoms tend to be more equatorial?

The most stable cyclohexane form is the chair conformation but on the other hand, the bigger the side-chain of the cyclohexane is, its hydrogen atoms become more equatorial rather than axial, which brings them closer to the cyclohexane's hydrogens. Shouldn't they arrange in a less energetic, but a more stable conformation?

It's not exactly clear from your question what distances you consider, but I have taken snapshots of a methylcyclohexane with the methyl group in the equatorial and axial positions: 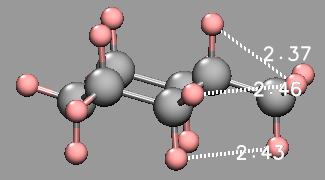 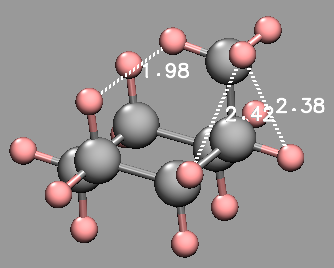 Also, as others have remarked in the comments: only the groups (and $\ce{H}$ atoms) directly on the cyclohexane ring are said to be in axial or equatorial position. Atoms of side chains do not follow this terminology, in particular for side chains that can rotate freely as it means nothing there.

Not the answer you're looking for? Browse other questions tagged organic-chemistry equilibrium structural-formula cyclohexane or ask your own question.

2
Solvation effect on cyclohexane
5
Boat conformation: axial hydrogens
11
Steric effects of a lone pair and piperidine
4
Is there an A value for the carbaldehyde and vinyl groups?
2
Best chair configuration for trimethylcyclohexane matching a specific Haworth projection?
3
Most stable chair conformation
1
Chair conformations of cyclohexane with two substituents
2
Heat of combustion among substituted cyclohexanes
6
Can a boat conformer of cyclohexane be most stable?
4
Why is the A-value of methoxy group lower than that of the hydroxyl group?