I am used to identifying molecular structure in isolation using proton and carbon NMR, but have never worked with a mixture before. The mixture relates to the following spectrum: 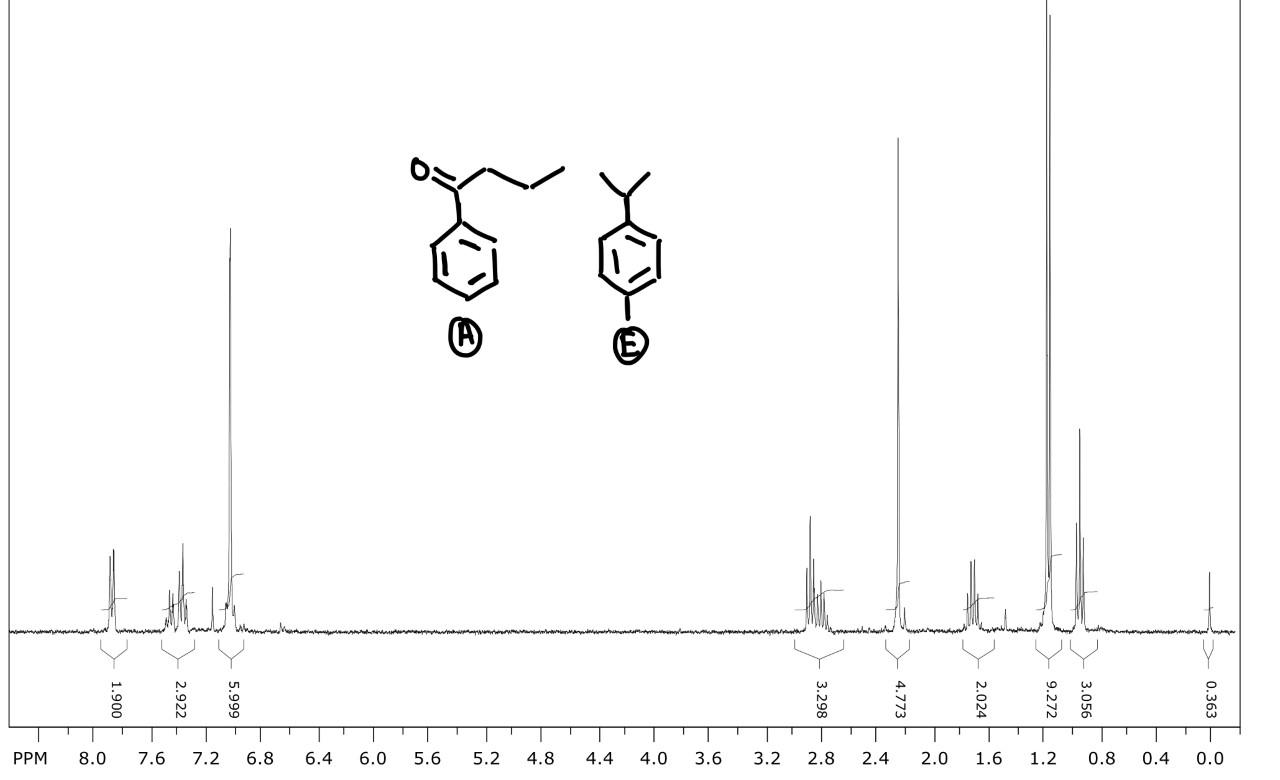 The spectra for compounds A and E are as follows: 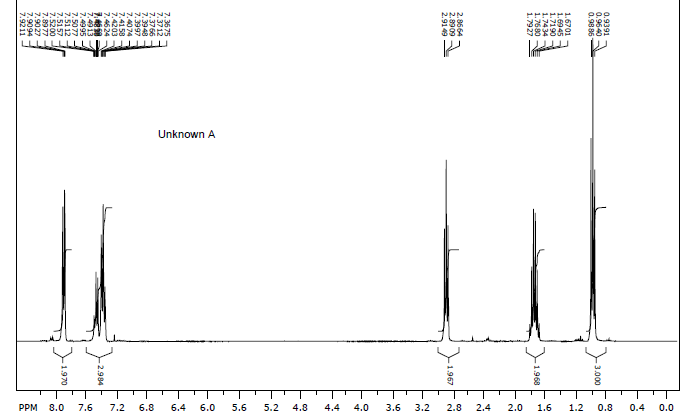 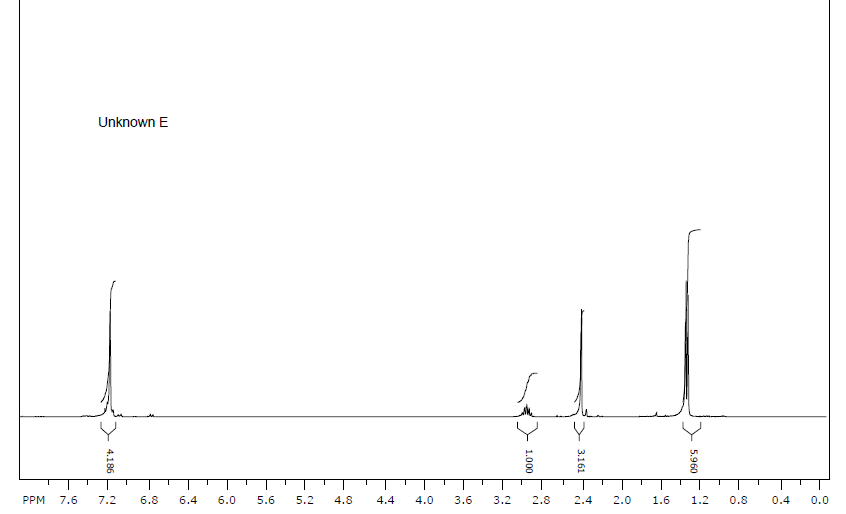 The spectra for the pure compounds were easy to delineate the structure, however it's the mixture that gave me the most trouble. I did some digging, and found a youtube video that gave me the following approach, in order to determine mole ratios:

Inspecting the pure spectra: there is a triplet in the spectra for unknown A at about 0.95 ppm, which represents three protons, and has a corresponding signal in the mixture at about the same chemical shift, with an integration of 3.056; and for the spectra of unknown E, there is doublet at about 1.32 ppm, which represents six protons, and has an integration in the mixed spectra of 9.272, with the signal shifted upfield to about 1.15 ppm. I suspect this could possibly be due to interactions between the components, perhaps van der Waal's forces.

Finally, returning these to the above equation:

Given the above equation can be related to the mass and molar mass of A and E as follows:

This is where I hit a snag however, because if I were to chose other signals from the pure spectra and plug them into the above equation, I don't get the same %w/w. I know this to be a limitation, given no internal standard was used, thus %w/w is not absolute but relative. But what are other limitations, besides NMR being inherently insensitive and requiring large concentrations? How could I fix these limitations?

Appreciate the help in advance.

If you want the best estimate from the existing spectra, add up the signal areas from the non-overlapping peaks (so not the signals near 2.8 ppm), add up the expected number of protons for those peaks, and use the formula you have. This will average out some of the noise.

If you want to know how many significant digits would be reasonable (less than 4), look at how much the ratios of integrals between peaks from the same component differ from the expected ratios. For example, the ratios for compound E (excluding the 2.8 ppm signal) are 3.88:3.09:6 instead of the expected 4:3:6, so they are off by more than 1%, but less than 10%. This means two significant figures might be reasonable.

If you want an estimate of the product distribution with more certainty, you should probably do experiments directly aimed at that (and probably do multiple runs of the synthesis to see how much variation there is from batch to batch).

If you resort to $\ce{^1H}$-NMR for an estimation of concentration you should look out for unique signals (here: either belonging to the butenone (A), or the cymene (E)) simple in shape (this prefers a singlet over a triplet), easy to recognize, which do not overlap with signals by the other compound, and still refer to similar nuclei in terms of their relaxation time in the NMR experiment.

If you want obtain data reliable enough, you should get in touch with your NMR group because the typical setup for the routine $\ce{^1H}$-NMR experiment favours high throughput of samples with a rather short $t_1$ time. However, the relaxation of the nuclei depends both on the chemical identity ($\ce{H}$, $\ce{C}$, $\ce{N}$) as well as its neighbors. Determine these $t_1$ times experimentally for your signals of interest ($0.5 \dots \approx \pu{5 s}$ for $\ce{^1H}$) and then adjust the NMR experiment to accommodate $3 \dots 5 \cdot t_1$ per individual FID recorded. Thus overall, recording a good spectrum to quantify components of a mixture takes a bit more time.

(One would record $\ce{^1H}$-NMR spectra of the pure components and a few samples within the molar range $0 \le x \le 1$ to ascertain that the peaks monitored do not move (too much) along the chemical shift while varying the concentration. For the two signals suggested, the variation ($\Delta\delta = f(c)$) and danger they overlap with signals of the other component however seems small. For reference samples used over a long time again and again, flame sealing an NMR tube is better than using the plastic cup.)

Not the answer you're looking for? Browse other questions tagged organic-chemistry experimental-chemistry nmr-spectroscopy or ask your own question.

18
What factors are important for quantitative analysis of a proton 1D-NMR spectrum?
3
Does this NMR show the carboxy group?
4
How to explain two NMR spectra of the (allegedly) same compound with slightly different shifts?
10
Historically, how was the connection between NMR peaks and hydrogen atoms made?
7
How can multiplets in para-disubstituted benzene rings be described?
0
What is the identity of the unknown compound using GCMS and NMR?
0
Why do certain signals in proton NMR experience extensive splitting despite only having 1 neighbour?
1
1H NMR of cyclohexanecarbaldehyde
3
Which of these protons are equivalent? Which NMR signals correspond to which protons?