What molecule is pictured on the cover of Dead Sara's album "Ain't It Tragic?"

An album released today by Dead Sara, titled Ain't It Tragic, has a chemical structure on the album cover. Here's a close-up of that structure: 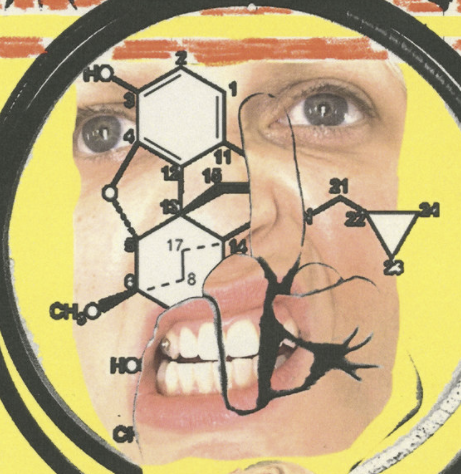 As the structure is partially obscured, it's difficult to identify what molecule might be depicted. However, I was able to identify some features that may be useful: 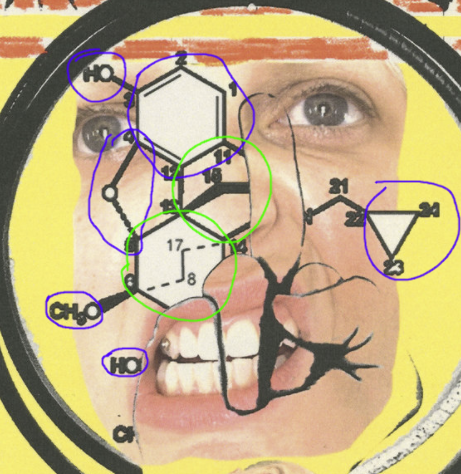 As an undergraduate chemistry student, I haven't encountered any structures similar enough to this to give me an idea of what I need to be looking for. Here are the things I've been able to establish so far:

What molecule is this?

I see two possible candidates: buprenorphine and thienorphine. Both are strong opioid painkillers fitting the “art” theme. Depending on how one draws the location of what appears to be a methoxy and a methylene group, it could be either one of those drugs. I leave it to the reader to decide how to unveil the structural part covered by the middle finger (literally) by posting a triptych for comparison:

Fig. 1. A: cropped molecular fragment from the cover art; B: Buprenorphine; C: Thienorphine.

Not the answer you're looking for? Browse other questions tagged organic-chemistry molecular-structure identification heterocyclic-compounds or ask your own question.

23
What is the isomer distribution in monosubstituted fluorobullvalene?
3
Method of deriving some properties or possible method of synthesis of a specific monomer
18
(Computationally) finding similarity between two organic compounds
25
How does the cyclopropyl group influence conjugation and aromaticity?
1
Number of chiral centers in Proline