I'm continuing with my electrolysis experiments. Over a long time, I seek a perfect electrodes. It seems, that when you pick the right anode and cathode, it might be a lot cheaper than universal super-electrode.

The cathodes are usually OK, since (+) ions do not hurt metals. However, $\ce{O-}$ and $\ce{Cl-}$ are both very agresive and will, sooner or later, destroy any anode I found so far.

My latest experiment was Zinc. Zinc is often used as non-corrosive layer added on iron via electro-plating. So I used it as an anode in $\ce{NaCL}$ aqueous solution. The anode I used was a piece of iron plated with zinc layer.

This scary jelly is forming on it. I also do not see any bubbles at all coming from the electrode - which mean that both chloride and oxygen ions are reacting.

The anode is consumed during the process - but what is produced? The jelly does not burn. When heated intensively, it bubbles and smells like chlorine. Does it decompose? 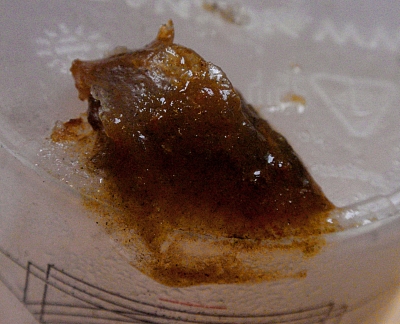 The orange colour is caused by the iron centre of the anode being oxidized. I tried other pieces of zinc I could find - they all produced this jelly.

Keep in mind, that solution does contain following additional compounds formed from salt and water:

Judging from the color, this clearly looks like more or less hydrated $\ce{Fe(OH)3}$ or $\ce{FeO(OH)}$, and it could also contain dissolved $\ce{FeCl3}$ formed by the reaction of iron with $\ce{Cl2}$ evolved at the anode. The fact that it smells like chlorine when you heat the gelatinous precipitate would support the latter assertion, but the smell could also arise from residual $\ce{Cl2}$ which was still dissolved in the water of the jelly. Heating $\ce{Fe(OH)3}$ or $\ce{FeO(OH)}$ intensively above 200 °C will give you $\ce{Fe2O3}$ by thermal decomposition (dehydration).

During electrolysis, the zinc layer on the electrode is degraded by pitting corrosion of $\ce{Cl-}$ and oxidation in the presence of oxygen. When the coating is completely removed by the corrosion in some places, the exposed iron reacts with oxygen and chlorine to the products mentioned above. On anodes made of pure zinc, $\ce{Zn(OH)2}$ will likely be the primary product, which will form a transparent to white, jelly-like precipitate. Zinc hydroxide formed by oxidative degradation of the $\ce{Zn}$ layer would also be a constituent of the precipitate on a zinc-coated iron anode.

Not the answer you're looking for? Browse other questions tagged electrochemistry home-experiment identification or ask your own question.

10
Which electrodes do not corrode at all?

12
How to plate zinc evenly on a threaded bar
2
What prevents the anode from corroding in electrolytic organic reactions?
7
Electroless Plating of Zinc onto Copper in NaOH Solution
2
Why is lithium plating irreversible in Li-ion cells?
2
Requirements for electroplating
0
How is the standard electrode potential measured without allowing the electrolyte concentrations to change?
4
Why can higher voltages lead to less efficient electroplating?
5
Electrolytic refining of copper
1
Is it possible to electroplate from a gallium anode?
0
How do oxide formations affect voltaic cells?