Mechanism of cyclisation with tin(IV) chloride

Could it just be the Lewis acid attaches to alcohol, causing the alcohol to leave; alkene attacks carbocation, ester attacks the carbocation formed (losing tBu in the process)?

The stereochemistry of this type of cyclization is well-understood. An extensive review may be found here. As you have realized the role of the Lewis acid stannic chloride is to generate the carbocation 1. The vacant p-orbital is aligned in the sigma sense with the π-bond of the double bond to permit cyclization, in the Markovnikov sense, to carbocation 2. There are two possible modes of cyclization of this carbocation to form either the less strained cis-ring juncture or the more strained trans-ring juncture. The transition state leading to the cis-lactone involves a steric interaction with an axial methyl group. The transition state (2 $\rightarrow$ 3) leading to the trans-lactone is less hindered and kinetically controlled. The utilization of the tert-butyl ester is to allow the rapid collapse of cation 3 to the trans-lactone 4, thereby insuring that the ring closure is not reversible. The tert-butyl cation 5 is scavenged by the solvent, nitromethane. 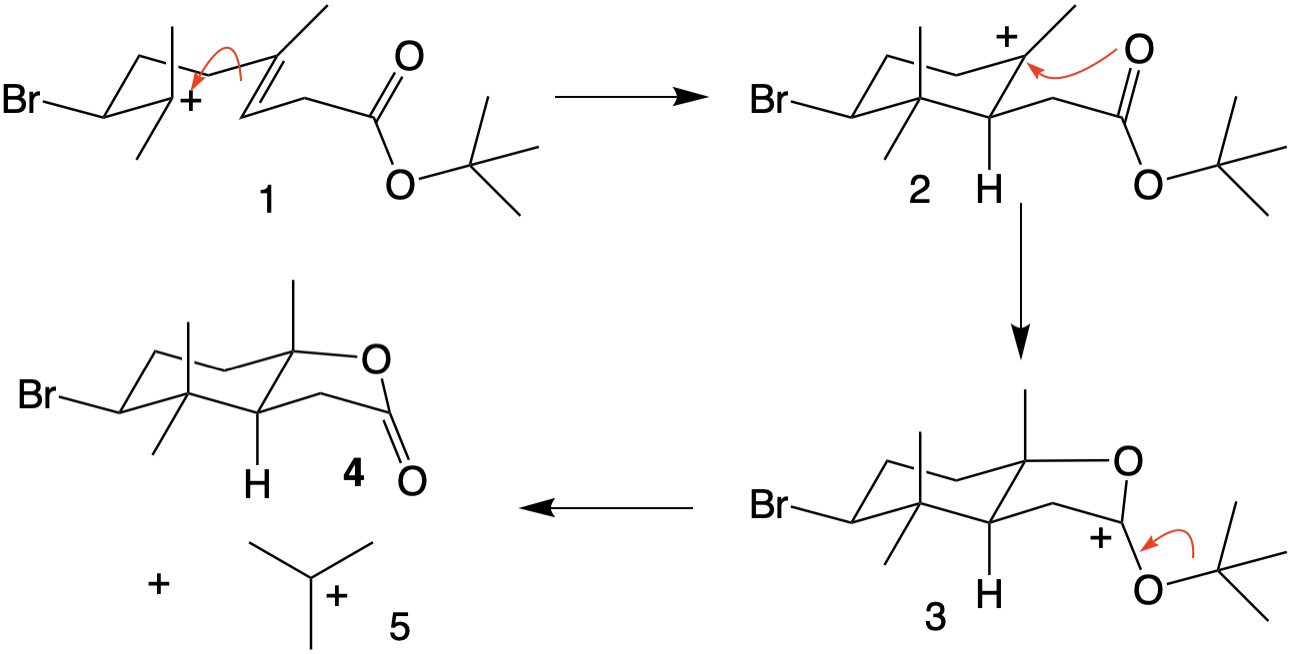 5
Mechanism of reaction between triphenylmethanol and acetyl chloride
11
Mechanism of radical cyclisation to form hydroazulene core
5
Cyclisation reaction through hydrazine
2
What is the mechanism of the reaction of a ketone with sodium nitrite/ hydrogen chloride?
7
Cyclisation of acetone on reaction with conc. H2SO4
3
Pyridine synthesis by tin(II) chloride reduction of 5-nitronorbornene