About the way chemicals and molecules are represented

The standard way of representing molecules with letters like $\ce{C}$ for Carbon, $\ce{O}$ for Oxygen etc.; and a lot of lines and double lines like a graph from Graph theory where each letter is a 'vertex', the lines like edges. I forget what this chemical notation system is called. Yet it is 2-dimensional. The formula for '$\ce{H2O}$' ,water doesn't indicate the 'angle' of 'separation' between the two Hydrogen atoms that are bonded with the Oxygen atom. Similarly a formula for some molecule like a protein might not indicate all the 'involved angles' in 3-dimensional space that 'allow' it to be folded in a precise way. So does the 2-dimensional notation system for molecules miss details of how a molecule is twisted in 3-D space? Also can two distinct molecules 'look' the same in 2-D notation?

Below is 2 types of sugars; glucose and mannose. 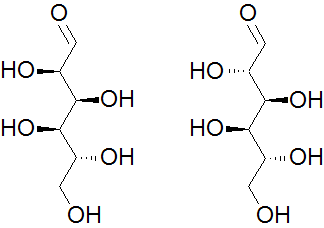 If you know how to interpret the lines, then you can determine which one is which.

Not the answer you're looking for? Browse other questions tagged molecules notation or ask your own question.

27
Are long oxygen molecules possible?
24
Why do the atoms in molecular models have the colors they have?
4
Detecting a gas molecule moving through a small pinhole
4
How to wedge d/hash notation a molecule?
16
Are there molecules that take the shape of every platonic solid?
0
Software that determines whether a molecule can exist and draw it from a formula?