Why do we need acid when making acetone peroxide?

Acetone peroxide is a very dangerous explosive, easily detonated by mild heating, friction or shock. It appears in the form of small white crystals. 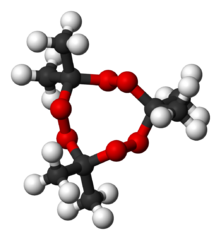 This compound forms from the mixture of hydrogen peroxide, acetone and hydrochloric or sulphuric (and maybe any other) acid. The acid, however, is only a catalyst in the reaction.

I'm curious why the acid is required for the reaction to happen. Is it actually necessary? Does the acid change during the reaction?

The role of the acid in this reaction (really a polymerization) is two-fold. First, it protonates the acetone carbonyl oxygen making the acetone carbonyl carbon more electrophilic. This speeds up the rate of attack by the nucleophilic hydrogen peroxide (or other hydroperoxides formed later in the reaction) on this carbon. Second, the acid also protonates hydroxyl groups in intermediates formed later in the reaction. This makes them better leaving groups and allows nucleophiles like hydrogen peroxide or other hydroperoxides formed in the reaction to displace them.

Here are links to two articles on the subject (reference 1, reference 2) along with a diagram of the proposed reaction mechanism. 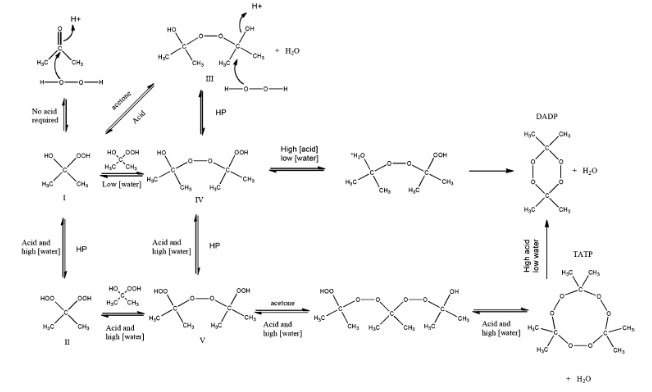 Not the answer you're looking for? Browse other questions tagged organic-chemistry reaction-mechanism catalysis explosives or ask your own question.

9
How do we get rid of dangerous explosive acetone peroxide and nitroglycerine?
16
Why is pyridine used when making tosyl esters from alcohols?
5
Why is temperature regulation an important factor for producing explosives?
22
Is carbonyl-enol tautomerization only intermolecular or can it be intramolecular?
1
Why is there such a violent reaction when NaCl is formed?
8
Can ethanol be oxidized by hydrogen peroxide?
6
Can the Smirnov-Zamkow reaction be described as a pericyclic process?
3
Simplest way to convert glucose into water and carbon dioxide other than burning?