Why are DCM and chloroform so resistant towards nucleophilic substitution?

In the book Organic Chemistry by J. Clayden, N. Greeves, S. Warren, and P. Wothers I found the following reasoning:

You may have wondered why it is that, while methyl chloride (chloromethane) is a reactive electrophile that takes part readily in substitution reactions, dichloromethane (DCM) is so unreactive that it can be used as a solvent in which substitution reactions of,other alkyl halides take place. You may think that this is a steric effect: Indeed, $\ce{Cl}$ is bigger than $\ce{H}$. But $\ce{CH2Cl2}$ is much less reactive as an electrophile than ethyl chloride or propyl chloride: there must be more to its unreactivity. And there is: Dichloromethane benefits from a sort of 'permanent anomeric effect.' One lone pair of each chlorine is always anti-periplanar to the other $\ce{C–Cl}$ bond so that there is always stabilization from this effect.

So, in MO-terms the situation would look something like this.

The reasoning looks plausible to me. The interaction between the free electron pair on $\ce{Cl}$ and the $\sigma^{*}$ orbital of the neighboring $\ce{C-Cl}$ bond, which would be the LUMO of DCM, lowers the energy of the free-electron-pair-orbital, thus stabilizing the compound and it raises the energy of the LUMO, thus making DCM less reactive towards nucleophiles.

I'm a little skeptical because if this anomeric effect was very important I would have expected that the $\ce{C-Cl}$ bond length in DCM would be slightly higher than in methyl chloride because there should be some transfer of electron density from the free electron pair into the antibonding $\sigma^{*}$ orbital, which should weaken the $\ce{C-Cl}$ bond. But the actual bond lengths don't show this. They show rather the contrary:

Now, I know that the stronger polarization of the $\ce{C}$ atomic orbitals in di-, tri-, and tetrachlorinated methane as compared to methyl chloride (due to the electronegativity of $\ce{Cl}$) should lead to an overall strengthening of the $\ce{C-Cl}$ bonds in those compounds. But I would have expected a trend that would show only a slight decrease (or maybe even an increase) of bond length when going from methyl chloride to DCM and then a more pronounced decrease when going from DCM to chloroform followed by a similar decrease when going from chloroform to tetrachloromethane. But instead the polarization effect seems to only slightly increase on adding more chlorine atoms.

I will analyse the bonding picture based on calculations at the density fitted density functional level of theory, with a fairly large basis set: DF-BP86/def2-TZVPP. As model compounds I have chosen chloromethane, dichloromethane, chloroform and chloroethane.

First of all let me state, that the bond lengths are a little larger at this level, however, the general trend for shortening can also be observed. In this sense, chloroethane behaves like chloromethane. An attempt to explain this will be given at the end of this article.

In the canonical bonding picture, it is fairly obvious, that the electronic effects dominate and are responsible for the lack of reactivity. In other words, the lowest unoccupied molecular orbital is very well delocalised in the dichloromethane and chloroform case. This is effectively leaving no angle to attack the antibonding orbitals. 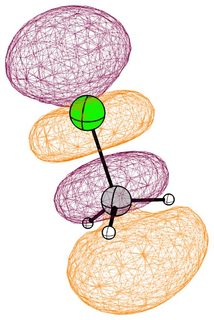 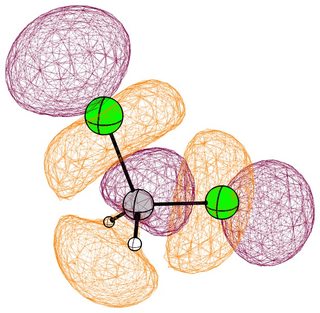 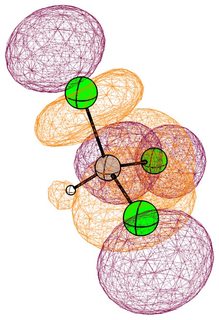 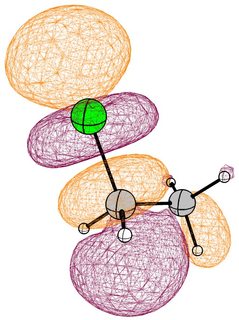 In the mono substituted cases there is a large coefficient at the carbon, where a nucleophile can readily attack.

The reason, why dichloromethane and chloroform are fairly unreactive versus nucleophiles, has already been pointed out in terms of localised bonding. But we can have a look at these orbitals as well.
In the case of chloromethane, the LUMO has more or less the same scope of the canonical orbital, with the highest contribution from the carbon. If we compare this antibonding orbital to an analogous orbital in dichloromethane or chloroform, we can expect the same form. We soon run into trouble, because of the localised $p$ lone pairs of chlorine. Not necessarily overlapping, but certainly in the way of the "backside" of the bonding orbital. In the case of chloroethane we can observe hyperconjugation. However, this effect is probably less strong, and from the canonical bonding picture we could also assume, that this increases the polarisation of the antibonding orbital in favour of carbon.
In the following pictures, occupied orbitals are coloured red and yellow, while virtual orbitals are coloured purple and orange. 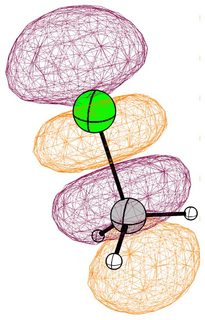 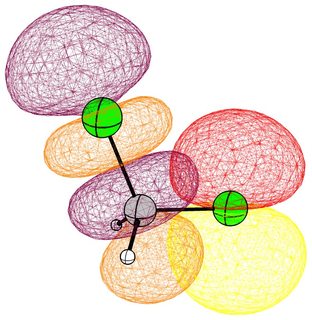 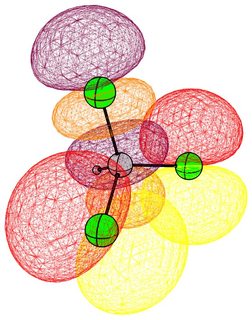 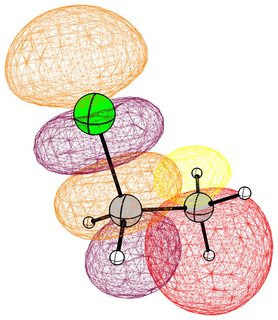 (Note that in chloroform two lone pair orbitals are shown.)

Even though this article does not use the Valence Bond Approach, one can clearly see the qualitative manifestation of Bent's Rule (compare also: Utility of Bent's Rule - What can Bent's rule explain that other qualitative considerations cannot?). A higher $s$ character means a shorter bond. The lack of reactivity towards nucleophiles can be explained electronically with a delocalised LUMO. In terms of localised bonding, the lone pairs of any additional chlorine atom would provide sufficient electron density, to shield the backside attack on the carbon.

But the main question remains: Is the anomeric effect the main cause for the unreactiveness of DCM towards nucleophiles or is it the steric hinderance exerted by the second Cl ?

There is a nice way to measure this side-ways (girth of a bond, if you will) interference in organic systems. Axial substituents in a cyclohexane ring are subject to what is termed "A-strain" produced by the interactions depicted in the figure below. These interactions are very analogous to the gauche interactions

For the interested reader, here is a Table of axial/equatorial $\ce{\Delta G's}$ (in kcal/mol) for other substituents.

Since this analysis suggests that a chlorine substituent is smaller than a methyl substituent, in terms of the side-ways interaction expected in a back side $\ce{S_{N}2}$ attack, it would be difficult to use a steric argument to explain the reduced reactivity in the polyhalomethanes towards $\ce{S_{N}2}$ reaction. This leaves the anomeric effect as a reasonable explanation for the reduced reactivity of the polyhalomethanes. But...

Thinking about it some more made me realize how the problem with the bond lenghts might be resolved. Let's look at the orbital picture again: 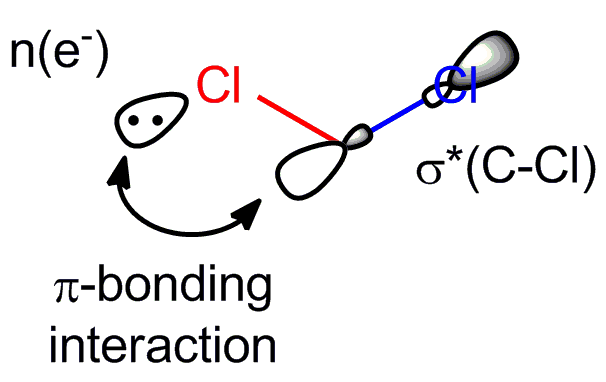 But the anomeric effect works not only in one direction in DCM (or Chloroform). The blue $\ce{Cl}$ atom has free electron pairs, too. And there is also a $\sigma^{∗}(\ce{C-Cl})$ orbital for the red bond that can interact with one of those free electron pairs in exactly the same way described before. Now, this interaction will strengthen the blue $\ce{C-Cl}$ bond while weakening the red $\ce{C-Cl}$ bond. So, it counteracts the effects of the interaction presented above and the bond-shortening and bond-lengthening effects should cancel each other out to some extent. But the raising of the LUMO, which makes DCM so unreactive remains unchanged.

Now, the only thing that needs some thinking is: Do the $\pi$-bonding and the $\sigma$-antibonding in the in-phase combination have a comparable magnitude? This question I can't answer in any quantitative way. So I will only list some factors of influence here. The $\ce{C-Cl}$ bond is rather long. This means the $\pi$-overlap won't be optimal. And the $n(\ce{e-})$ orbital will lie somewhat lower in energy than the $\sigma^{∗}(\ce{C-Cl})$ orbital thus weakening the covalency of the $\pi$-interaction. On the other hand, the same factors will also lower the amount of $\sigma^{∗}(\ce{C-Cl})$-character contained in the in-phase combination MO. All this leaves me with the gut feeling that the $\pi$-bonding might indeed be comparable to or even a little stronger than the $\sigma$-antibonding effect. And this would mean that the observed bond lengths are in accord with the orbital situation and the anomeric effect might very well be quite important for explaining the unreactiveness of DCM towards nucleophiles.

But the main question remains: Is the anomeric effect the main cause for the unreactiveness of DCM towards nucleophiles or is it the steric hinderance exerted by the second $\ce{Cl}$? 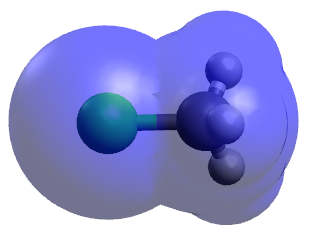 which seems to support the view that the spacial requirements of a chlorine atom and a methyl group are rather similar (but I don't know how reliable the van der Waals surface calculations by Avogadro actually are). If those lengths mirror the real spacial requirements of the groups in the context of a nucleophilic substitution reaction then a chlorine atom wouldn't exert a larger steric hinderance than a methyl group and the anomeric effect would clearly be the determining factor when explaining the unreactiveness of DCM. But I'm unsure whether resorting to van der Waals radii is justified.

The anomeric effect where σ(C−C) orbital overlaps with the σ∗(C−Cl) should be considerably less than the overlap of n(e−) and σ∗(C−Cl). Therefore by comparing the relative rates of substitution of DCM, and a primary alkyl chloride, whose alkyl group is similar in size as the chlorine atom, against MeCl should give us the answer. I would be thankful if someone could provide the data.

17
Why are acetals stable to bases and nucleophiles?
15
Utility of Bent's Rule - What can Bent's rule explain that other qualitative considerations cannot?
5
Why is dichloromethane immiscible in water?
4
When is donation into an anti-bonding MO stabilising?