Is this the correct mechanism of the formation of the nitronium (NO2+) ion from sodium nitrate and sulfuric acid?

I am currently working on a mechanism for forming paracetamol (or N-(4-hydroxyphenyl)-ethanamide). The typical reaction to nitrate the phenol (starting product) is $\ce{NaNo3}$ with a catalyst of sulfuric acid. The sulfuric acid is required as a catalyst to form the nitronium cation - an electrophile - to attack the aromatic phenol. Unlike the nitration of toluene (for TNT) or benzene, it is possible to use $\ce{NaNO3}$ because the oxygen in the hydroxy group is activating.

My proposed mechanism for the formation of the nitronium is this: $$\ce{NaNO3 + H2SO4 + 2H2O <=> Na+ +NO3- + SO4- + 2H3O+}$$ I think this is a likely equilibrium between the starting ions. Sulfuric acid is a strong acid, and therefore to use a mechanism with it undissociated I think unlikely - the reaction would be slower, due to lower concentrations of the undissociated sulfuric acid. I know that $\ce{NaNO3}$ is fairly soluble, so would dissociate into ions.

In the $\ce{HNO3}$ molecule the oxygen-hydrogen bonds are all different lengths - $\ce{N-O}$ is 119.9pm, or 121.1pm, and the $\ce{N-O-H}$ bond is 140.6pm. The $\ce{N-O-H}$ bond is clearly weaker than the other two bonds. This is attributed to the resonance effect - a valence electron from each oxygen interacts with a lone pair on nitrogen favorably, shortening and strengthening the bonds. Protonating the oxygen in $\ce{NO3-}$ thus weakens the bond. Protonating the oxygen a second time: $$\ce{HNO3 + H3O+ <=> NO2+ + H2O + H2O}$$ Would probably break that bond.

However, the hydronium may protonate one of the other two oxygens. Why is the one already protonated more basic? The other two oxygens have a higher electron density, so would be more nucleophilic - better for the electrophilic $\ce{H3O+}$ to attack. A fraction would surely react in the way I have described, but I would think a much higher proportion would react on other oxygens.

Is this mechanism likely/correct? Could you explain how the second protonation occurs?

The electrons on the two other oxygens are delocalized making them much less basic. 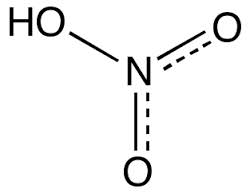 As you described, the reaction depends on formation of the nitronium intermediate. I think you are right that the (partially) negatively charged oxygens are more basic. However, nitronium formation is much much faster by using water as a leaving group rather than hydroxide, which is what would be required otherwise.

Not the answer you're looking for? Browse other questions tagged reaction-mechanism bond or ask your own question.

3
Acid-Catalyzed Hydration
4
Hydrolysis of cyclic acetal
10
Is ozone an electrophile in the ozonolysis reaction?
8
Weird Wikipedia Section on Oxidizing Behavior of Nitric and Sulfuric Acids
2
Mechanism of acid-catalyzed addition of water across an alkene
9
Mechanism of the formation of peracetic acid
11
Why does a proton prefer to attack a double bond instead of protonating an alcohol in a reaction of unsaturated alcohol with sulphuric acid?
3
Determining the mechanism followed when alcohols undergo a reaction with sodium bromide and sulphuric acid