Utility of Bent's Rule - What can Bent's rule explain that other qualitative considerations cannot?

Does Bent's rule have any utility? I got a vehement earful for "NO." Points raised by my professor:

Obviously, carbon tetrachloride has the stronger and shorter carbon-halide bond because in chloromethane, the methyl group is slightly electron donating, and this repels the terminal chlorine, which lengthens the carbon-halide bond. No application of Bent's rule is necessary.

However, bond angles are also explained nicely through Coulombic effects. The C-H bonds in chloromethane are obviously shorter due to the electron-withdrawing nature of chlorine and the carbon-chlorine bond is obviously expanded due to methyl group/chlorine lone pair repulsion. This shortening of the C-H bond lengths explains the H-C-H bond angle expansion in chloromethane, and the lengthening of the C-X bond explains the X-C-H bond angle expansion.

Is there any case in which other elementary considerations (Coulombic, VSEPR, van der Waals repulsions) fall short in the realm of molecular geometry and Bent's rule can step in to pick up the slack? Anyone got some sort of vindication for Bent's rule? 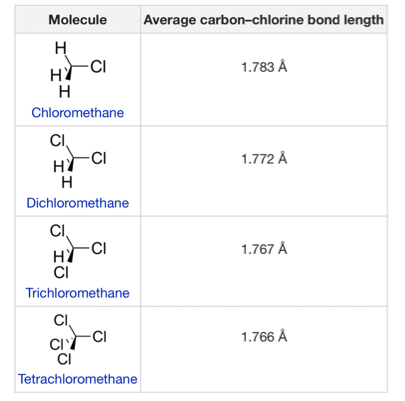 There is a reason for everything.

Does Bent's rule have any utility?

YES! It wouldn't be there if there was not. But I will get back to this at the end of this post.

Let me go through the points raised by your teacher first:

This might be true to some extent, but that only means that coulombic considerations give the same result as a complete orbital analysis. Boltzmann, Planck, Einstein, Schrödinger, Pauling, etc. worked the field for a reason - classical mechanics cannot be applied to molecular systems. Any theory that simplifies it beyond quantum mechanics, is a model to understand or comprehend - not a model to predict.

Occam's razor would suggest picking molecular orbital or valence bond theory, as it states that from competing hypotheses the one with the fewest assumptions should be selected. Coulombic consideration is purely based on assumptions, it is a rather crude approximation to the correct picture.
The statement, that orbitals are not real is clearly wrong. There are many books that explain how one can comprehend this. Teaching that orbitals are not real is, with all due respect, just plain wrong.

But let's talk about Bent's rule. The IUPAC goldbook states:

Bent's rule originates from valence bond theory (VB). Early forms of VB theory proposed that a molecule can entirely be described by a set (linear combination) of resonance Lewis structures, i.e. every bonding orbital is a directed localised orbital, which will be occupied by two electrons and the same applies to lone pairs. The advantage of this approach is that it is easily comprehensible. The disadvantage is, that it is quite inflexible. The reason for this was the use of either pure $\ce{s}$ and $\ce{p}$ functions or fixed hybrid orbitals $\ce{sp^3,~sp^2,~sp}$, which only allowed a subset of angles. A direct quote from Bent's original paper states this as follows:

For atoms that satisfy the octet rule, and it is with such atoms (e.g., carbon, nitrogen, oxygen, fluorine) that this review is primarily concerned, the four valence-shell orbitals of an atom may be thought of as compounded from one spherically symmetrical $\ce{2s}$ atomic orbital and three mutually perpendicular dumbbell-shaped $\ce{2p}$ orbitals, designated $\ce{2p_$x$, 2p_$y$, 2p_$z$}$, ($x, y, z$ indicate mutually orthogonal axes). The $\ce{2s}$ orbital is lower in energy than the $\ce{2p}$ orbital; hence the ground state of a carbon atom, for example, is written $\ce{ls^2~2s^2~2p^2}$ (not $\ce{ls^2, 2s~2p^3}$. However, in a molecule such as methane, which is known to have the shape of a regular tetrahedron, the $\ce{2s}$ orbital of carbon may be considered to mix (or “hybridize”) with the three $\ce{2p}$ orbitals to form four equivalent orbitals that point to the corners of a regular tetrahedron and make angles with each other of $109^\circ28’$. These are called hybrid orbitals. Each contains one-quarter $\ce{s}$ character and three-quarters $\ce{p}$ character, abbreviated $\ce{s^{$1/4$}p^{$3/4$}}$ or $\ce{sp^3}$, or $\ce{te}$ (for tetrahedral) (223). In ethylene, on the other hand, the $\ce{2s}$ orbital of carbon may be considered to mix with but two of the three $\ce{2p}$ orbitals to form three equivalent hybrid orbitals that lie in a plane and make angles with each other of $120^\circ$; these three hybrids, which contain 33 per cent $\ce{s}$ character, are abbreviated $\ce{s^{$l/2$}p^{$2/3$}}$ or $\ce{sp^2}$, or $\ce{tr}$ (for trigonal); perpendicular to the plane of these three orbitals is the axis of cylindrical symmetry of the remaining pure $\ce{2p}$ orbital. The geometry of acetylene is often explained by assuming that the carbon $\ce{2s}$ orbital mixes with but one of the three $\ce{2p}$ orbitals, forming two $\ce{di}$ (for digonal) hybrids that point in diametrically opposed directions; these are abbreviated $\ce{s^{$1/2$}p^{$1/2$}}$ or $\ce{sp}$.

The original approach allowed already good results. However, Bent already draw the conclusion, that hybridisation is connected to molecular geometry:

The formulated rule was later merely a result of the approach to flexibilize this theory. It is therefore a very important part of theoretical chemistry.

Of course there are now many more modifications to VB theory, and it is nowadays considered complementary to molecular orbital theory, but this would certainly exceed the scope of this question.

Not the answer you're looking for? Browse other questions tagged theoretical-chemistry stereochemistry or ask your own question.

42
Are the lone pairs in water equivalent?
27
Why are DCM and chloroform so resistant towards nucleophilic substitution?
23
What is Y-aromaticity? Is the trinitromethanide anion aromatic?
7
What is the molecular geometry of NHF₂?
16
What is the hybridization of the carbonyl oxygen in a carboxylic acid?
13
Are carbocations necessarily sp2 hybridized and trigonal planar?
8
Is the phenyl cation or ethynylium more stable?
7
Why the bond angle of PH3 is lesser that that of PF3?
10
Why does SO2 have a larger bond angle than H2O, H2S, and NH3
8
Why is the H−C−H bond angle in сhloromethane larger than 109.5°?
See more linked questions