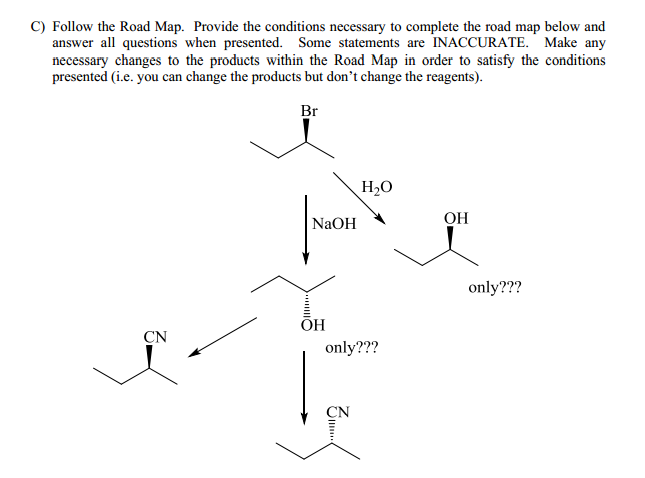 This one was a bit involved. The alkyl halide turning into an alcohol with retention of stereochemistry suggested that an SN1 mechanism was at work. The addition of NaOH and the inversion of stereochem followed by "only" suggested again an SN2 mechanism. No E2 products; hydroxide isn't basic enough to deprotonate an alkane to a significant extent. The transformation of the alcohol into a nitrile group with inversion of stereochemistry is SN2; attacked with a non-protic solvent for good measure. The transformation into a nitrile group with retention of stereochem is SN1; treatment with tosyl chloride turns the -OH into a good leaving group. 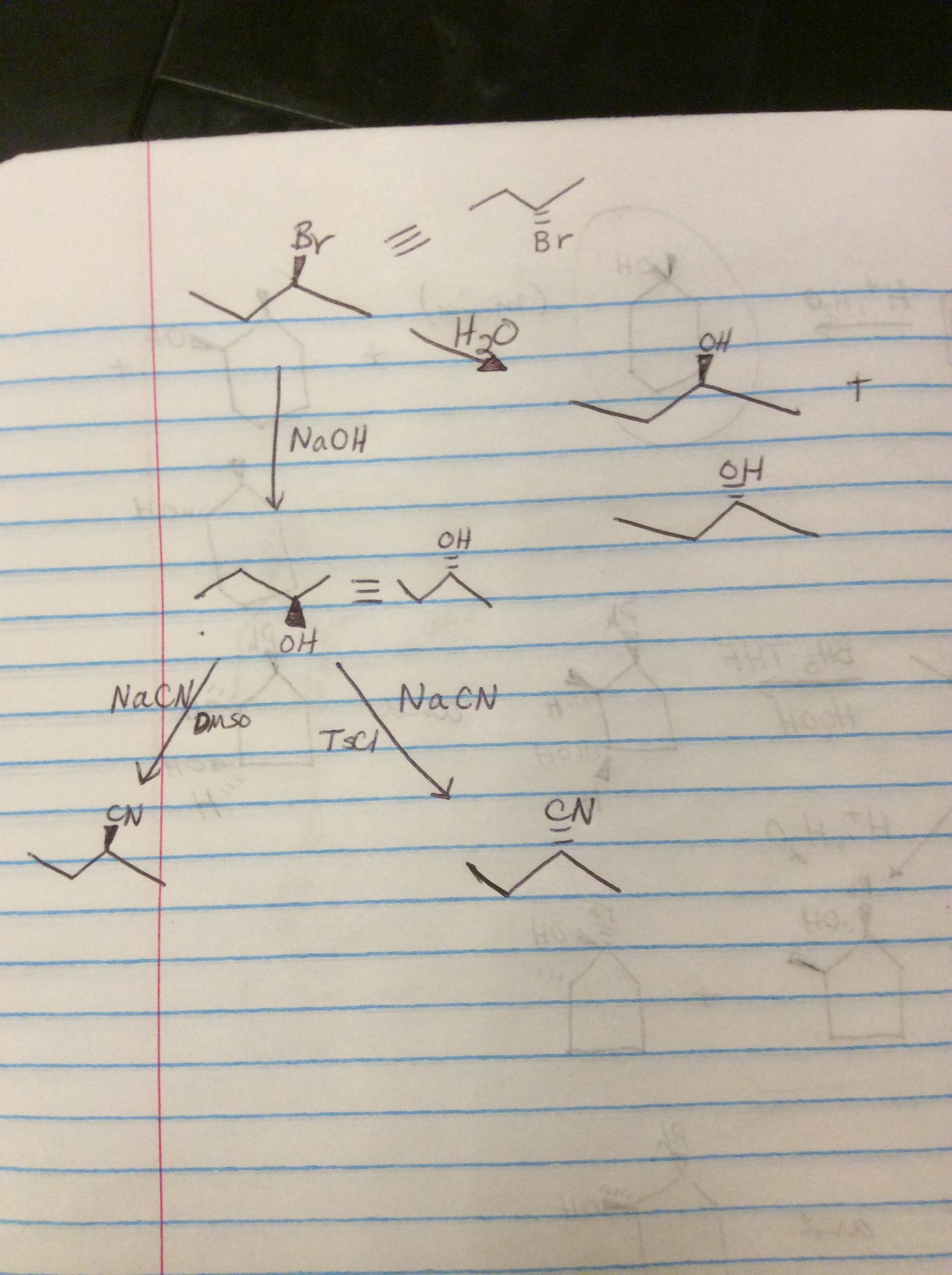 Since Greg E. focused on the first parts of the roadmap, I'll focus on the cyanation reactions.

What you have shown for the sequence from (R)-2-butanol to (R)-2-cyanobutane (retention of configuration), actually gives inversion of configuration. It is probably more clear if we look at this as two discrete steps. Step one is reaction with TsCl (and pyridine typically) to give the tosylate with retention. Step 2 is reaction with NaCN to give the cyano compound (S)-2-cyanobutane with inversion. Perhaps that can all be done in one step, but I've never seen it or tried it.

Going from (R)-2-butanol to (S)-2-cyanobutane (inversion of configuration) by direct reaction with NaCN will not give the target compound. Hydroxide is not a suitable leaving group for SN2 reaction. The hydroxyl must be converted into a better leaving group first, such as the tosylate above.

In theory, one can substitute a leaving group with retention of stereochemistry by performing two successive $\mathrm{S_N2}$ reactions. The first one inverts stereochemistry, and the second one inverts it again, thus restoring the original configuration. The Finkelstein reaction might be applicable: reaction of your 2-bromobutane with sodium iodide in acetone should yield 2-iodobutane via $\mathrm{S_N2}$, which can then be reacted with sodium hydroxide. Reaction of a secondary alkyl halide with $\ce{NaOH}$ will definitely yield competing elimination products, however. Note that, with secondary substrates, some competition will exist between $\mathrm{S_N1}$ and $\mathrm{S_N2}$, but the latter can be favored by use of an aprotic solvent and an excess of nucleophile.

Reaction with $\ce{H2O}$ is going to be slow and would yield a racemic mixture of $\mathrm{S_N1}$ products, as well as the competing $\mathrm{E1}$ product (with possibly some minor side-products from bimolecular pathways as well, depending on conditions). If you're satisfied with a racemic mixture, I would think elimination followed by acid-catalyzed hydration or oxymercuration-demercuration would be faster and more reliable in practice.

Cyanation with inversion can be done by direct reaction of your 2-bromobutane with, e.g., sodium cyanide. Cyanide is less basic basic than hydroxide, so competing eliminations are much less of a problem. If you want retention of configuration, replace the bromine first (as described above), then perform the substitution with $\ce{NaCN}$. The same ideas apply if starting from a tosylate instead.

1
Why does pyridine make such a big change from SNi to SN2?
0
Do the mechanism (SN1 or SN2 ) which reaction follow depends more upon intermediate stability than on substrate and nucleophilic?
5
Is (2R,3S)-3,4-dimethylpentan-2-ol feasible to be dehydrated with POCl3 and pyridine?