What is abnormal Beckmann rearrangement?

What is abnormal Beckmann rearrangement? I read this term in one of my solution papers but I am not able to find relevant literature for the same. Answers linking to some source, or giving the relevant theory are appreciated.

For comparison, the normal Beckmann rearrangement leaves with an amide:

The reaction schemes of both Beckmann and abnormal Beckmann rearrangement has been already provided by @Buttonwood. I am going to explain the mechanism of the reaction and provide some literature to look at.

The normal Beckman reaction involves the generation of an incipient carbocation at the carbon atom located anti to the oxime oxygen, which is intercepted by migration to nitrogen to afford a nitrilium ion intermediate, which is subsequently hydrolyzed to yield an amide. The abnormal Beckmann reaction occurs in cases where the adjacent carbon can stabilize positive charge; a carbocation intermediate is formed that undergoes heterolytic fragmentation of the carbon–carbon bond anti to the leaving group to yield a nitrile. The initiating step of both the normal and abnormal Beckmann reactions involve the departure of an oxygen leaving group from nitrogen, with the propensity of a substrate to undergo one or the other transformation dictated by the nature of the anti substituent. 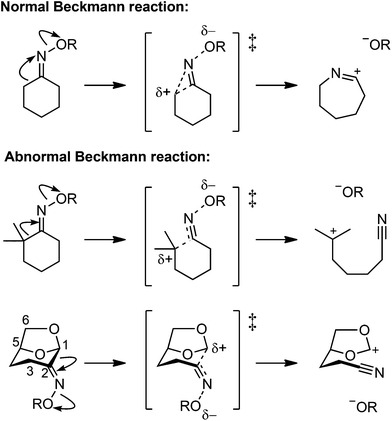 You can look at some of the literature where abnormal Beckmann rearrangement is involved:

The Beckmann rearrangement is an acid-mediated isomerization of an oxime (or N-haloimine or nitrone) functional group to corresponding substituted amides (Cyclic oximes or cyclic N-haloimine yield lactams). The rearrangement was discovered by the German chemist, Ernst Otto Beckmann (1853–1923) in 1886 (Ref.1). The rearrangement, which bears its discoverer’s name, is one of the oldest and most familiar transformations in organic chemistry.

The "normal" rearrangement occurs stereospecifically for ketoximes and N-chloro/N-fluoro imines, with the migrating group being anti-periplanar to the leaving group on the nitrogen: 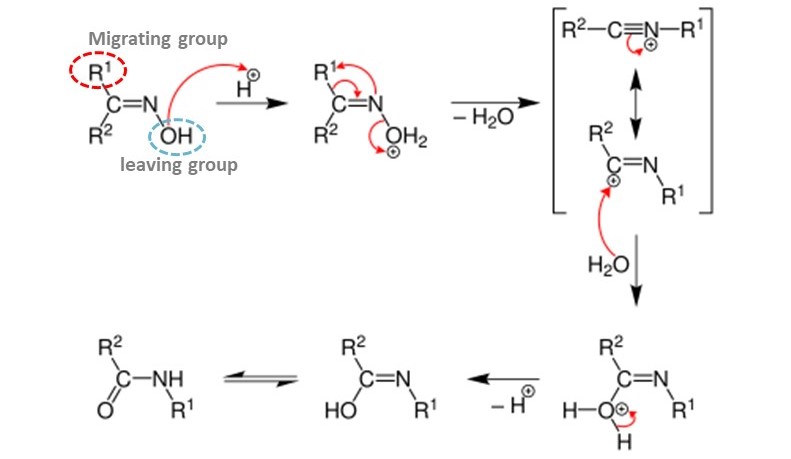 However, certain conditions have been known to racemize the oxime geometry, leading to the formation of both regioisomers during the rearrangement.

There is another reaction that often competes with the "normal" Beckmann rearrangement, which is called "abnormal" Beckmann rearrangement or Beckmann fragmentation (Ref.2 &3). Based on the condition used (e.g., careful selection of promoting reagent and or solvent) and structural properties of the starting oxime (e,g., carbocation stabilizing group substituted at $\alpha$-position), you can get either of products as the major product selectively: 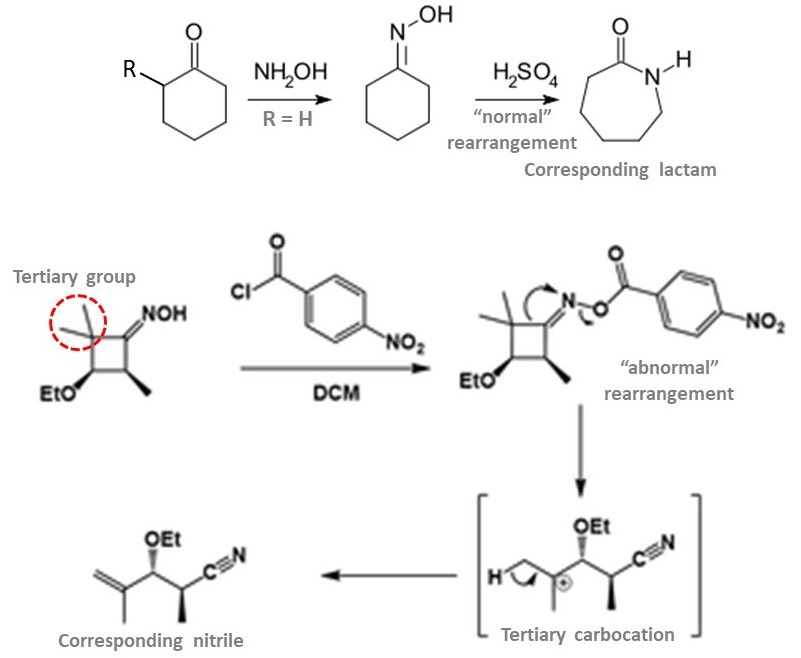 As shown in the above scheme, the cyclohexanone oxime (when $\ce{R = H}$) would give primary carbocation, if it undergoes "abnormal" Beckmann rearrangement or fragmentation by opening the ring and subssequently making a nitrile group. because it is not stable, it is not posible to undrgo this path and gives corresponding lactam as the product al most exclusively by "normal" Beckmann rearrangement. 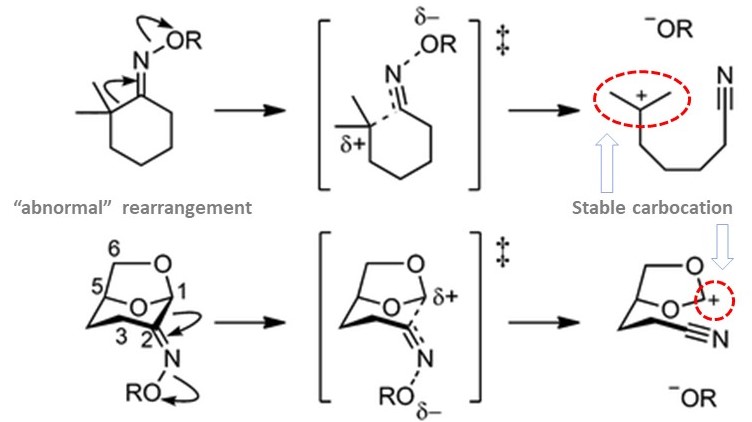 Not the answer you're looking for? Browse other questions tagged organic-chemistry reaction-mechanism molecular-structure rearrangements or ask your own question.

4
Does the Hofmann Rearrangement extend to Secondary Amides?
3
Rearrangement of an oxyallyl cation
9
Effect of substituents on arene oxide-phenol rearrangement
0
Ring expansion in cyclo compounds
4
What is the origin of rotational energy barrier in ethane?
3
Beckmann rearrangement v/s dehydration of Oximes