What is the cause for thermodynamic reversible and irreversible process?

Thermodynamic irreversible process is defined as the process in which the changes take place rapidly, instead of occurring in successive stages with infinitesimal changes in quantities so that the system does not get a chance to attain equilibrium and there is an appreciable difference between the driving and the opposing force.

I have some problems in understanding it.

Let me start by reiterating what @Phillip said in his comment: this is not a good definition for an irreversible processes - a better definition is:

An irreversible process is one in which the net entropy generation term is greater than zero.

All real processes are irreversible. The "process speed" comes into play when we want to make approximations for idealized systems. It turns out that one way to convert a process into a theoretically reversible one is to set the condition that it moves very slowly between thermodynamic states, so that at any given step, it is in equilibrium. The reason that this isn't a good definition for a reversible process is that there are cases where a rapid change is reversible, and cases where a very slow change is irreversible. It's just that in general use, the "very slow process" approximation is commonly used to obtain a reversible process.

Which equilibrium are they speaking of?

Typically they mean equilibrium between the system and surroundings, but it can also mean within the system itself. Equilibrium is another way of saying "maximum entropy" - the matter and energy are as "spread out" as they are going to get. If the entropy is maximized, no more can be generated. In "real life" this means the system is well-mixed and that matter and thermal energy has dissipated throughout the system - there are no temperature or concentration/density gradients. This is easier to visualize using particles instead of energy - imagine an ideal gas in one side of a partitioned chamber, where the partition has a hole in it to allow the molecules to cross into the other section: 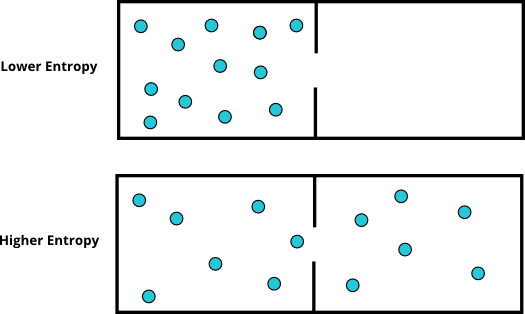 Why does rapidity of the change prevent it from attaining equilibrium (how does an infinitesimal change in a reversible process help it to reach equilibrium)?

Whenever a system is perturbed, meaning moved away from an equilibrium state, it takes some amount of time to reach a new equilibrium. This amount of time is called the relaxation time. Different systems have different relaxation times, and if you make changes quickly enough, the system won't have time to relax, and therefore won't be in equilibrium. Using a piston in a cylinder as an example, if you compress the piston by a very small amount, then the pressure inside will be in equilibrium with the pressure outside almost immediately.

What do they mean by driving and opposing force?

It is important to remember that these are approximations that are intended to allow us to convert really difficult (usually unsolvable) differential equations that describe non-equilibrium or dynamic systems into something that is solvable. The trade-off is that we go from a realistic, fully dynamic system to one with constraints - we treat it like a series of tiny jumps between systems that are in equilibrium. In many cases, these approximations don't affect the accuracy of the solution. However, whether or not it will is determined by the time scale of the change relative to the relaxation time of the system.

3) Driving and opposing forces: Each process is driven by some kind of 'force' (please do not understand 'force' in the traditional physical sense; it's more of 'reasoning, why something would want to do something'). For example, when having a saturated sodium chloride solution, the sodium and chloride ions that are still bound in their ion structure in the precipitate would like to dissolve, the driving force being the increase of global entropy by a greater disorder of the entire system.

On the other hand, every process also has an opposing force, that attempts to force the process back into its original state. In the case of the saturated sodium chloride solution, the opposing force would probably be something along the lines of releasing water molecules out of a solvation shell, and thereby increasing local entropy.

2) The smaller and less rapid a change happens—in our case, dissolving one pair of sodium and chloride is a very small change—the easier it is to just go the other way. If a change is 'rapid' (I don't really like the word here, but I'm not good enough to find a better one), then obviously the driving force is stronger than the opposing force, creating a bias towards the product side.

1) Any process can be understood as a dynamic one, with the change happening in both forward and backward direction. So even if you were to burn methane—clearly an irreversible process—you can still consider very minute quantities of carbon dioxide and water recombining to form a methane molecule or two (and oxygen). You won't, however, observe a proper equilibrium between methane/oxygen and carbon dioxide/water.

I hope I could help in some way, and I think you should get a better book ;)