In the graphite arrangement of carbons, if we model them according to hybridization theory, the carbons in graphite are sp2 hybridized. This would mean that one s and two p orbitals hybridize, making 3 hybridized orbitals. This clearly would make the molecular structure trigonal planar. However, 1 electron is left. Wouldn't this electron be found in the remaining p orbital that wasn't hybridize? I couldn't find any information about this so I ask it here. Moreover, if this is the case, would this p orbital of a carbon in a layer overlap with the other p orbitals in the top and bottom layers?

If I said something that is wrong, feel free to correct me. Thanks in advance.

By the obsolete concept of hybridization, all carbon atoms in graphite are sp2 hybridized. A total of three (1 - 2s and 2 p-orbitals) lead to this hybridization. Due to the formation of sigma bonds with axial overlap of one of these sp2 orbitals with another sp2 orbital of another centre, the atoms exist as a planar array of hexagonal carbon rings. The odd electron resides in the remaining unhybridized p-orbital of sp2 carbon centre, perpendicular to the plane containing the three equivalent sp2 hybrid orbitals. The last odd electron is not localized in the unhybridized p-orbital, but is rather delocalized throughout the layer, due to lateral pπ - pπ, overlap, causing conjugation of odd electron, throughout the plane. It is a bit like an ethylene molecule with H-C bonds replaced by C-C bonds over an enormous plane.

(This is a reason for the high electric conductivity of graphite compared to other carbon allotrophs and other non metals). 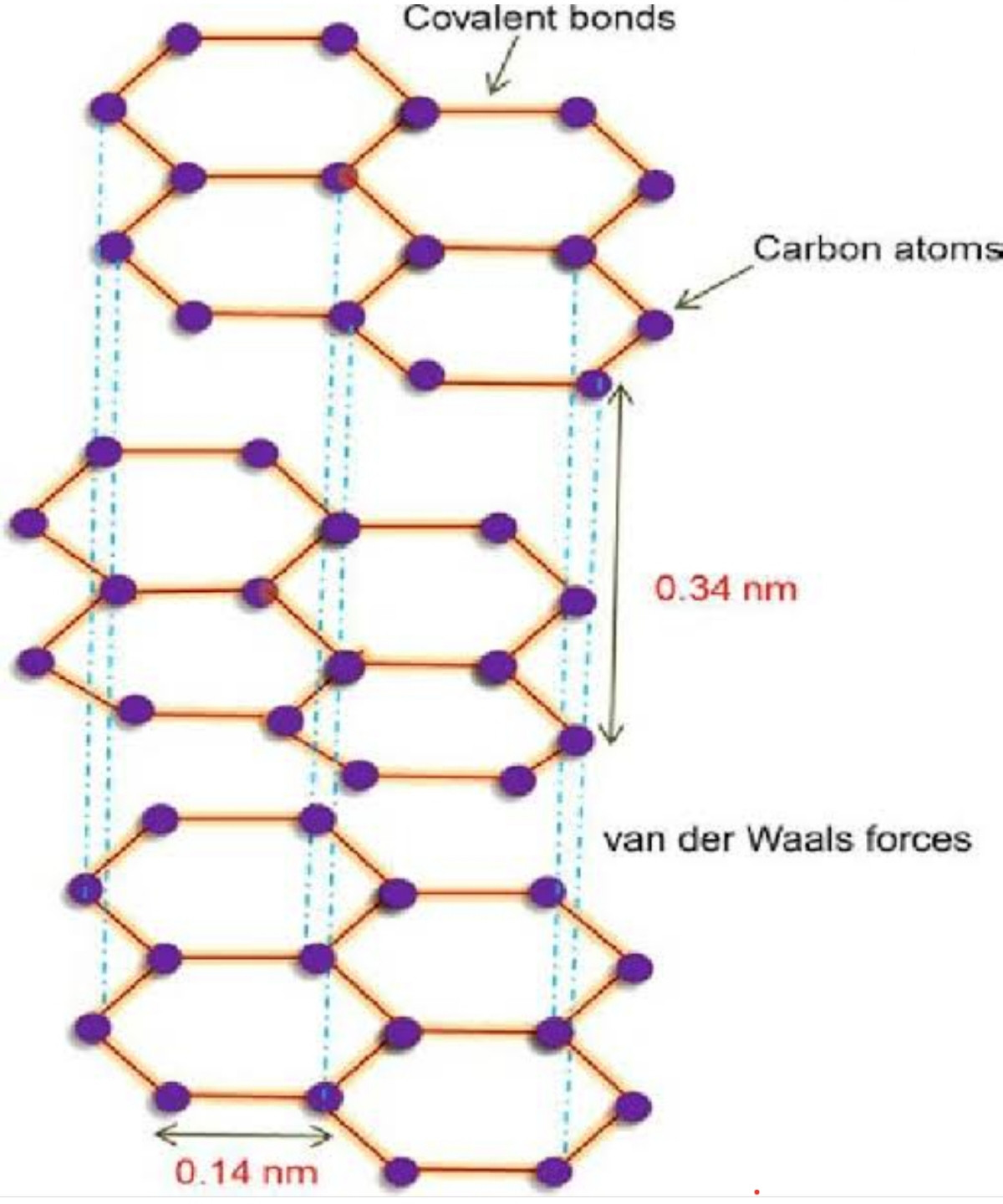 Unhybridized p-orbitals (of C atoms in adjacent planes) do not overlap end to end.

In this diagram, the distance between the two adjacent layers of graphite ~0.34 nm (order of 10-9) >>>>>>> greater than the longitudinal length of a lobe of the perpendicular p-orbital projecting from a plane - in the order of picometers (order of 10-12), so clearly they are not large enough to overcome the immense distance of seperation to overlap.

Moreover, the odd electrons in them are already in conjugation, by pπ - pπ lateral overlap. This will further retard any cross-layer bonding interaction.

Not the answer you're looking for? Browse other questions tagged organic-chemistry quantum-chemistry bond hybridization valence-bond-theory or ask your own question.

4
sp2 hybridization Group V elements
2
Delocalised electron in graphite
6
Do hybrid orbitals exist in unbonded molecules? What would they look like?
1
Are there square planar complexes with sp2d hybridization?