I recently answered a question about Breaking Bad's initial methamphetamine production method (i.e. the reduction of (pseudo)ephedrine). The reaction is as follows:

The first step seems like a simple $\ce{S_{N}2}$ substitution of $\ce{I^{-}}$, catalyzed by the protonation of the alcohol group by hydroiodic acid (making it a far better leaving group). But what is the mechanism after that? How is phosphorus involved? Does the $\ce{HI/P}$ reduction have any legal use?

According to the source mentioned in the comments to your question, the first step is indeed nucleophilic substitution of the OH group by $\ce{I-}$, faciliated by protonation of the alcohol. For the second step ($\ce{HI}$ reduction), a radical species was found as an intermediate, and therefore a reduction by single electron transfer (SET) with oxidation of $\ce{I-}$ to $\ce{I2}$ is proposed. Red phosphorus is required for the regeneration of $\ce{HI}$ from $\ce{I2}$. $\ce{P_{red}}$ reacts with $\ce{I2}$ to the phosphorus iodides $\ce{PI3}$ and $\ce{PI5}$, which are subsequently hydrolyzed to $\ce{H3PO3}$/$\ce{H3PO4}$ and $\ce{HI}$, which is reused in further reduction steps. Catalytic amounts of $\ce{HI}$ are therefore sufficient to run the reaction in the presence of phosphorus. However, a too low concentration of $\ce{I-}$ will lead to elimination instead of substitution in the first reaction step. 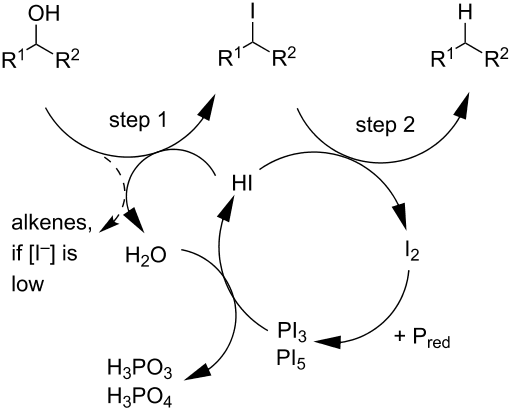 The SET mechanism of the reduction is not described in detail in the article, so the following is a bit speculative. As a resonance-stabilized radical is involved, homolytic cleavage of the $\ce{C-I}$ bond is one of the first steps, which gives the benzylic radical $\ce{R.}$ and an iodine radical $\ce{I.}$. A single electron is transferred from $\ce{I-}$ to $\ce{R.}$, forming the carbanion $\ce{R-}$ and $\ce{I.}$, which recombines with another iodine radical to $\ce{I2}$. Protonation of $\ce{R-}$ yields the final product.

As for the second part of the question, this reaction is actually used commercially in the fine chemicals and specialty chemicals industry. An example that comes to mind is the reduction of 4-hydroxymandelic acid to 4-hydroxyphenylacetic acid. This intermediate is used in one route to the popular beta blocker "atenolol". Of course, as mentioned in the comments, other reactions are often favored when possible. In addition to the issues mentioned, phosphorus and iodine are both relatively expensive.

Not the answer you're looking for? Browse other questions tagged organic-chemistry reaction-mechanism redox chemistry-in-fiction or ask your own question.

2
Why is Red Phosphorous used in the Nagai Method?
12
Is there a catalyst that will reduce an alcohol to an alkane?
11
Does RedP+HI reduce all carbon functional groups to alkane?
5
Reduction of amino acids to corresponding amino alcohols
0
Reduction of alcohol to alkane