What are the most important resonance structures of 5-aminocycloheaxa-2,4-dienone?

Show, by means of curly arrows and electron shifts, the resonance contributors to the structure given below. Suggest which one would not be a major contributor and state why.

This is a question from my exam. I do not understand where I went wrong. My effort is placed at the end (along with a request).

Also, my TA removed 1 point out of 7 for a reason. Can anyone decipher for what? There's the writing in red but it is illegible to me. I don't understand to what he refers by 8 and 6 t or +, or whatever he wrote. 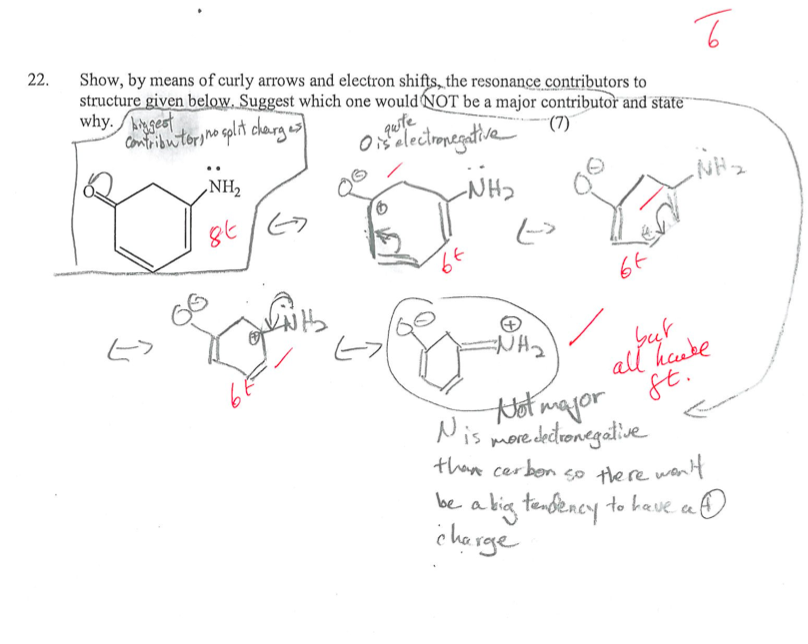 organic-chemistry resonance
Share
Improve this question
edited May 17 '21 at 9:10

The handwriting of your TA probably stems from ancient egyptian script, I had a hard time reading it. In the end I agree with jerepierre, interpreting it as "6E" or "8E" short for 6/8 electrons. The last statement then translates to "but all have 8E."

A simpler approach is to analyse the molecule with Natural Bond Orbital (NBO) Analysis. I have done this for you, but only as an educational effort. Maybe after understanding this concept it is easier to grasp why certain structures are make a smaller contribution.

Let me go ahead and explain a little NBO to you. The electronic structure of a molecule is in general highly delocalised. All orbitals are stretched over the whole molecule. Without changing the electron density, it is possible to localise (transform) these orbitals to represent two centre interactions, that can be interpreted as bonds. This gives an approximate picture in terms of a Lewis structure. There will be electron density which cannot be assigned to a bond. The smaller this density is, the better is the fit as a Lewis structure.

For this educational approach I picked the 5 resonance structures you have posted plus an additional ionic form. (I would have detracted a point for the last structure.) There are many more ionic forms, but these will not have big effects, e.g. cleavage of a carbon carbon bond.

The first statement that should be made is that this molecule is quite well described by Lewis resonance structures. However, delocalised bonding would describe the molecule much better. All structures are reasonably close to each other, as one would expect for a very delocalised system.

The ionic structure has the smallest impact, which is feasible because nitrogen-hydrogen bonds are better described as covalent. However, it proves that there can (in the right medium) be a proton shift from nitrogen to oxygen, and is therefore worth consideration.

The structure with the second largest error (% non-Lewis) is $\mathbf{4}$. A positively charged carbon would be by far more electronegative than nitrogen. And many imine-type structures are known, which makes $\mathbf{5}$ more important. (In this sense I would disagree with your explanation, which could also justify the detraction of a point.)

In general: Carbocation structures that are not in close proximity to (much) more electronegative elements should be considered as having a lesser influence on the electronic structure of a molecule.

i think your teacher said "but all have it" refering to the split charge (?) I would personally say that the ones with less contribution would be the ones with carbon with positive charges because while N+ and O- are relatively stable, C+ is certainly not. Being a bit more specific, I would say (not 100% sure) that the 4th one because is the one in which the positive charge is in an unstable carbocation and close to a Nitrogen atom which would destabalise it even more due to its electronegativity.