In cracking, why does C form double bonds?

I've been reading about cracking and I've found various images and animations that show a process like this: 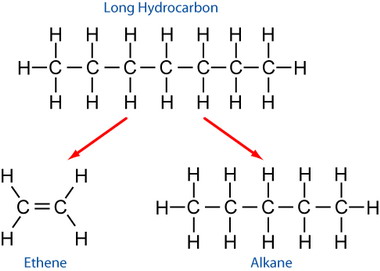 But I haven't been able to find out the sequence of events to get to this, and why this would occur.

I understand that cracking involves thermal decomposition, where a CC bond is cut. But that's as far as I can truthfully say I understand. To get this reaction below, you need:

(1) Two cuts. One cut would be between two Cs, and the other cut between a C and a H. Why does a H have to be cut off as well? Is this example I found actually one of many random and messy ones that just happens to 'give us what we want in the end'?

(2) The free H would then have to join the alkane. I get why this happens.

When we heat hydrocarbons to high temperatures (somewhat lower temperatures if we use a catalyst) they crack. That means that carbon-carbon bonds are broken and smaller fragments are formed. In the top part of the following drawing, I've picked n-heptane as an example. You can see that there are 3 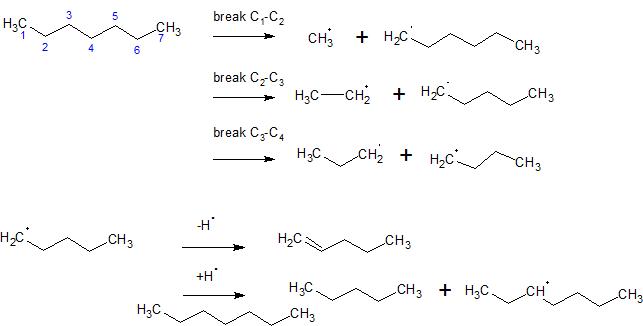 I've picked one of the possible radicals generated in the top drawing and show how it may react further in the bottom half of the figure. Sometimes it will break a C-H bond and lose a hydrogen atom and form a stable compound with a double bond (an olefin), sometimes it will remove (abstract) a hydrogen from a hydrocarbon (heptane in our example) to generate a new alkane (pentane) and a new radical (perhaps a radical not formed in the initial cracking step). Many of the radicals formed can rearrange to more stable radicals, this adds further complexity to the overall process.

The key here is that radicals are very reactive species - they want to stabilize by regaining the octet of electrons around the carbon atom that has the radical. They can get that octet and become stable by adding a hydrogen atom (alkane formation) or breaking a C-H bond and eliminating a hydrogen atom to form an alkene.

5
Why do different alcohols have different effects on the brain?
5
How can I work out what reaction will happen?
7
Why does this compound only have one pair of enantiomers?
4
Why is HCl used in hydrolysis of sucrose?
3
Stability of carbocation intermediates: secondary alkane versus primary allyl?
24
Where does computational chemistry overlap with organic chemistry?
1
Why does a carbocation undergo covalent bonding with, say, chloride, rather than ionic bonding, like what occurs between Na+ and Cl-?