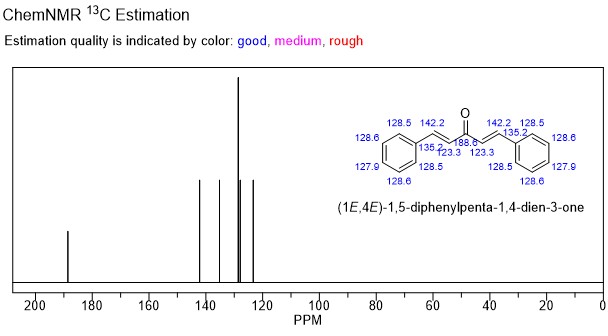 I am unable to understand why the alpha carbon to the carbonyl group is of lower chemical shift compared to the beta carbon based on the effects of electronegativity and hybridisation. Since if electronegativity was a major factor, it would not explain why the beta carbon, which is further from the carbonyl group, has a larger chemical shift value than the alpha carbon. It is also not possible for this to be due to hybridisation effects as, both alpha and beta carbons are $\mathrm{sp^2}$ hybridised.

Is it possible that this difference in chemical shifts between the alpha and beta carbons can be explained by drawing the resonance structures?

I first learnt of this possible resonance structure when studying 1,4-Michael addition and thought that it could help explain why the chemical shifts of alpha and beta carbons are in this way. Since the resonance structures show that the electrons are unequally shared, and has resonance contributors where the carbonyl carbon and beta carbon have positive charges. The positive charge thus makes them deshielded since they would have "less electrons on them," hence explaining their higher chemical shifts compared to the alpha carbon.

I would like to know if this is a valid or correct explanation as to the different chemical shifts of carbon. If this is a possible explanation, why then is it not taught along with electronegativity and hybridisation effects?

You are talking about the product of the aldol condensation of benzaldehyde and acetone, which is (1E,4E)-1,5-diphenylpent-1,4-dien-3-one. Compared to other more complex organic compounds, this is pretty simple one for $\mathrm{NMR}$ analysis (see Nicolau Saker Neto's comment above). As a consequence, ChemDraw has done pretty good job on suggesting the carnon resonances. For instance, below is the actual $\ce{^{13}C}$-$\mathrm{NMR}$ spectrum of the sought compound (Ref.1):

Since you indicated that you have studied 1,4-Michael addition, I'd like to ask that did you ever wonder why is the nucleophile always attacks $\beta$-carbon during Michael addition reactions? That is because it is the most electron lacking carbon on the system due to the conjugation with more elecrton demanding carbonyl group. That means it is more deshielded than neighboring $\alpha$-carbon (meaning it is having less electron density compared to that of the $\alpha$-carbon). Thus, the carbon chemical shift of $\beta$-carbon $(\approx\pu{144 ppm})$ is higher than that of the $\alpha$-carbon $(\approx\pu{126 ppm})$.

The principles of $\mathrm{NMR}$ spectroscopy is not directly dependent on electron density of individual atoms. Although it is a major contributing factor, but there are other factors such as anisotropy and steric factors. For example, in a aromatic system, proton at outside the ring current shows higher chemical shifts (more down field) compared to those in the inside ring current (more down field). You will learn those facts when you are about to learn advanced spectroscopy. I'd say for your level of education, you have made a good suggestion to explain the difference in chemical shifts on $\alpha$- and $\beta$-carbons.

Since Azamat has pointed out a valid argument, I like to extend my discussion here: 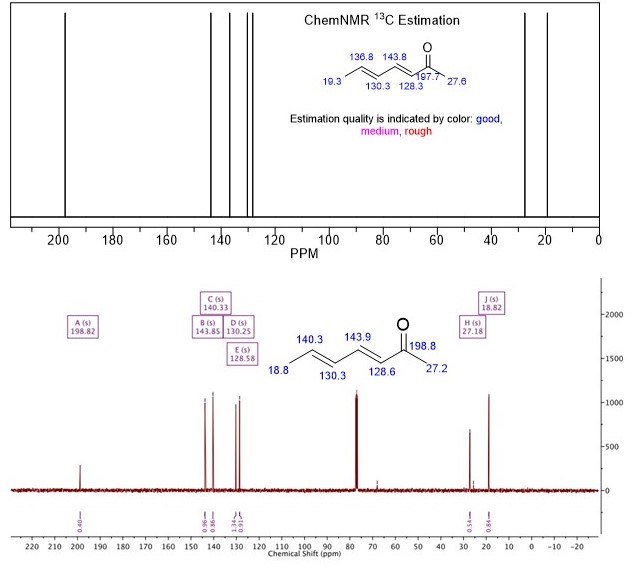 The $\ce{^{13}C}$-$\mathrm{NMR}$ spectra of above image are the stimulated one by ChemDraw (top spectrum) and actual one from reference 2 (bottom one) of the compound, (3E,5E)-hepta-3,5-dien-2-one. The reason to choose this compound is it lacks the phenyl nucleus and also have an extended double bond. You may see that ChemDraw has given an excellent assignment, mainly due to the simplicity of the compound. As shown in the structure, $\beta$- and $\delta$-carbons ($\ce{C}$4 and $\ce{C}$6) are more deshielded compared to that of $\alpha$- and $\gamma$-carbons ($\ce{C}$3 and $\ce{C}$5). That is what exactly would have suggested by the conjugation that would show partial positive charges on $\beta$- and $\delta$-carbons as well as on the carbonyl carbon (less electron densities than that on $\alpha$- and $\gamma$-carbons). Here, it is a methyl group next to $\delta$-carbon compared to phenyl group next to $\beta$-carbon in the original compound. Yet, additional shielding or deshielding effect is minimal. Therefore, it is safe to conclude that the major factor here is high electron demand by the carbonyl carbon compared to phenyl group.
Note also that, in original compound, mesomeric effect would overcome inductive effect due to extended resonance. It is also worth noting that carbonyl carbon is more shielded ($\pu{189 ppm}$ vs $\pu{199 ppm}$) in original compound due to cross resonance by both directions.