Which one, Mulliken charge distribution and NBO, is more reliable?

Sometimes the Mulliken and NBO turn out to be so different that I can't decide which one I can trust. I've heard that Mulliken is inaccurate, but is NBO always accurate? And should I use Gaussian or other software to calculate charge distribution? Are there methods more accurate than Mulliken or NBO?

As I do not want to drag this out in the comments, I decided to give a brief answer. Let me first cite the very helpful comments to keep the for (relative) eternity and add my thoughts at the end.

Mulliken is of course the cheapest and fastest way to compute charges. However, this method tends to give qualitative results at best. The reason for this is obvious. It will divide the canonical orbitals equally amongst the participating atoms. There is no polarisation whatsoever. Another problem is, that they are very basis set dependent. And that being said, the worst part is, that the description becomes worse by increasing the basis set.

NBO charges are much more reliable, since the operate on the electron density instead. Localised natural atomic orbitals can be used to describe the computed electron density. Polarisation of bonds is therefore considered. This method obviously only works very well for systems, that can actually be (quite well) described by a Lewis structure. However, they usually give a nice qualitative picture and are quite robust when it comes to increasing the basis set.

There are a couple of more population analysis tools, that can be used and should be considered when it is necessary to derive some conclusions from charges.

Quite common is also the Hirshfeld charges approach, which divides the electron density into spherical basins around the nucleus. Maybe interesting to read is "Are the Hirshfeld and Mulliken population analysis schemes consistent with chemical intuition?" (I can't tell, I do not have access.)

There are also several schemes to obtain partial charges from the electrostatic potential.

Probably the most rigorous approach to atomic partial charges is the Quantum Theory of Atoms in Molecules (QTAIM). Here the Laplacian of the electron density is used to describe the partitioning in electronic basins. The best feature of this analysis is, that it can be also used for experimentally obtained electron densities. However, as everything, this has also major drawbacks. One of the most important is the computational effort. Unfortunately the integration scheme is not always completely robust when it comes to some particular molecules. However, it is almost completely basis set independent and results could be cross referenced with experimental data.

Since permeakra's initial statement holds true, especially for the agreed part, the best way to deal with partial charges is to be careful and maybe check with different methods. In gaussian there are several schemes implemented, most commonly, Mulliken, Hirshfeld and NBO (3.1) and some others, see the population keyword for more detail. 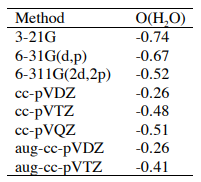 Not the answer you're looking for? Browse other questions tagged physical-chemistry computational-chemistry molecular-orbital-theory or ask your own question.

39
Are the lone pairs in water equivalent?

21
Is the Springborg 6D phase space model used in modern molecular orbital modeling?
4
HOMO/LUMO and charge distribution
7
How to obtain the radial probability distribution function from a quantum chemical calculation?
5
What's an “amagat”? How is it different from the Loschmidt Number?
6
Relationship between Hartree-Fock and Hückel coefficients
3
Confusion about comparing the charge densities of benzene and fluorobenzene