Of 2-bromobutan-2-ol and trans-1,2-dimethylcyclobutane which is chiral as well as dissymmetric?

In an examination I was asked to determine the molecules which are chiral as well as dissymmetric. There were four options, and among them, two were achiral, as they had an improper axis of symmetry. The other two options are 2-bromobutan-2-ol and trans-1,2-dimethylcyclobutane:

These two compounds are chiral, as they do not have an improper axis of symmetry. I couldn't find any axis of symmetry as well. The question has only one correct answer, but I don't know which one is correct. Please help me with the answer.

I assume you already studied molecular symmetry and point groups. So, first of all, among the existing point groups, you can have chiral point groups (point groups C1, Cn, Dn) and achiral point groups (all the others). As a matter of fact, chirality is unchanged when it comes to operations such as E or Cn (that equal an even number of reflections). On the contrary, this is not the case when it comes to operations that equal an odd number of reflections (σ, Sn, inversion), as they can convert a right-handed object into a left-handed object. So an improper rotation axis (Sn) implies that the molecule cannot be chiral. Both molecules that you show here are chiral, as you correctly pointed out.

2-bromobutan-2-ol belongs to point group C1 as it has no symmetry other than the identity (which is the C1 axis that every molecule has and that corresponds to a rotation by 360° that of course brings the molecule back to the same initial position). Being the C1 axis the only element, C1 molecules are defined asymmetric.
The other two chiral point groups (Cn and Dn) are dissymmetric.

trans-1,2-dimethylcyclobutane has a C2 axis that allows you to rotate the molecule by 180° (which is 360°/2, that's why it corresponds to a 2-fold rotation axis) obtaining a situation that is equivalent to the initial one: 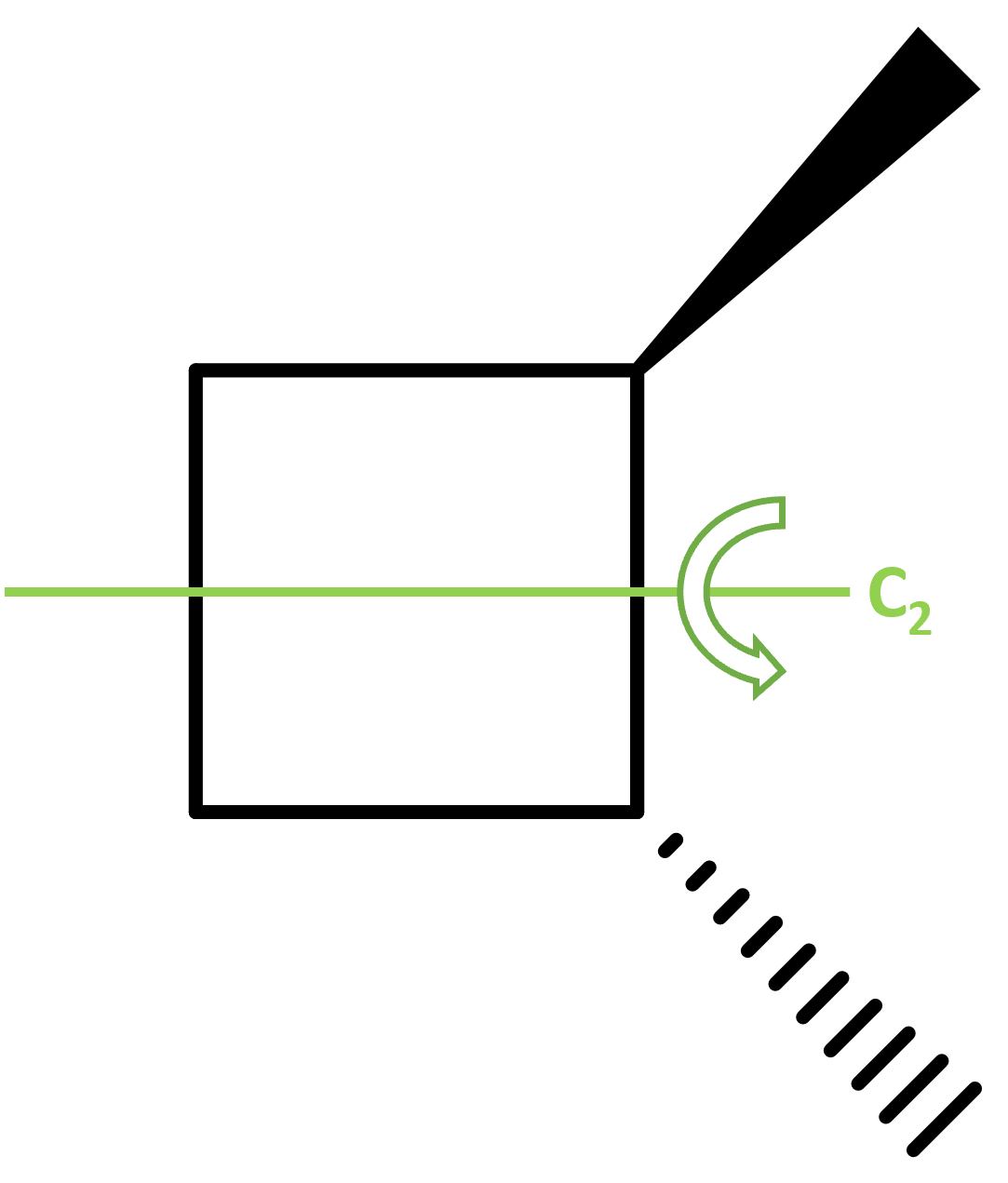 Let's see this with colors, so it's easier:

So, in conclusion, since (1R,2R)-1,2-dimethylcyclobutane belongs to the C2 point group, it is "chiral as well as dissymmetric".

Note: The above is only true in a first order approximation. A more detailed look will reveal that the cyclobutane ring is puckered and the C2 axis no longer exists.

Not the answer you're looking for? Browse other questions tagged organic-chemistry stereochemistry molecular-structure chirality symmetry or ask your own question.

4
How to find the number of stereoisomers of a tetra-substituted allenes, exhibiting both axial and central chirality?
10
Number of stereoisomers of a polyene
2
Is the given stereoisomer of 1,2-dimethylcyclobutane chiral?
1
Which one of the following is optically active?
6
Use of axis of symmetry
9
Why are carbons of Inositol chiral centers?
3
Is the existence of chirality center equivalent to chiral?
0
Stereochemical relationship between the given compounds