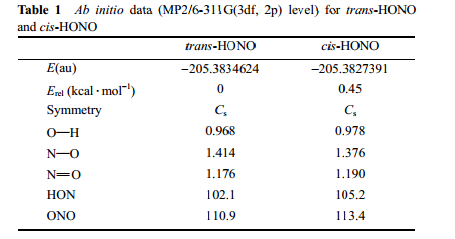 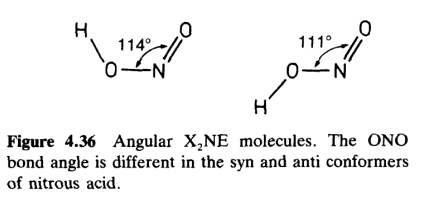 Who's right? From the replies I have gleaned that hydrogen bonding is likely to have a small to non-existent role in HONO given that hydrogen-bonding might actually increase (pseudo) ring strain.

I also think that my professor's argument regarding free-rotation along a single bond axis is a bit simplistic at best; in isolation, yes, single bonds can rotate, but so can double bonds (you just have to expend enough energy to break the pi-bond). Plus, there are barriers to free rotation of single bonds. You can't rotate single bonds willy nilly all the time. And according to the quantum mechanical calculation, the cis isomer exhibits a slightly higher energy than the trans isomer.

1a) Over what maximum distance can hydrogen bonding still exert a notable force? I'm curious. With this information I might try to do some trig using the QM data and see if the H and the O in the cis-conformer even come close enough for there to be hydrogen bonding.

2) Can cis and trans terminology be used to describe HONO? Usually these two terms are used with respect to identical atoms or functional groups. How about anti and syn? Or eclipsed and non-eclipsed?

4) Ionic resonance structures - are these valid in the aqueous phase? Seems that if we have a lone proton hanging around in water it would be immediately solvated and taken away from the rest of the molecule ... this was the issue the prof raised. An obvious counter to his issue is that resonance structures don't exist discreetly; the ionic resonance structure is just a contributor - a partial representation of the true bonding nature in nitrous acid. It doesn't actually suggest that the proton is separated from the rest of the molecule. Dunno why he raised that issue ...

5) Authors of one paper also mention that nitric acid exhibits a similar widening of the cis isomer's ONO bond angle ... what might the two different bond angles for nitric acid be? Hell, does nitric acid even have cis/trans isomers? I don't think so ...

Regarding intramolecular hydrogen bonding in HONO

The below paper is based on the premise that hydrogen bonding exists within nitrous acid.

The influence of intramolecular hydrogen bonding on the photodissociation of cis-HONO is probed via measurements on the OH fragment ejected by specific [...] stretching (ν2) vibrational levels of the Ã state. Due to hydrogen bonding between the H atom and the terminal oxygen, the ν2 motion is coupled to the in-plane HON bend ν3. Since the latter evolves into fragment rotation, the rotational energy and anisotropy of the OH product increases with the number of ν2 quanta. By contrast, ν2 in trans HONO is a relatively isolated [...] vibration and thus does not influence the OH photofragment's properties.

These are very small effects that we are discussing, so who really knows what's behind them. The experimental measurement data was reported in, "Microwave spectrum, structure, dipole moment and quadrupole coupling constants of cis and trans nitrous acids, A. Peter Cox, Alan H. Brittain and David J. Finnigan. Trans. Faraday Soc., 1971,67, 2179-2194, DOI: 10.1039/TF9716702179." The abstract states, "The structural parameters are markedly different in the two isomers and have been discussed, together with the torsional barrier and relative stability of the isomers, in terms of a cis interaction." If anyone has access to the paper, perhaps they can let us know what the authors have to say about the nature of this "cis interaction."

Below are some of the resonance structures that can be drawn for the two isomers. First note that the cis-

isomer has the lone pairs on the same side of the molecule (lone pair - lone pair interactions), presumably responsible for the cis isomer being about 1/2 kcal/mol less stable.

If we examine the (hyperconjugative) resonance structures III and IV in the cis isomer, we might expect some stabilizing, through-space electrostatic attraction of the opposite charges between the positively-charged proton and the negatively-charged, terminal oxygen.

So perhaps very different contributions from the possible resonance structures to the real descriptions of cis- and trans-nitrous acid can account for the observed structural differences between these two isomers.

Side Notes: 1) hydrogen bonding is unlikely due to the attendant ring strain as noted by Ben Norris, 2) the oxygen-oxygen interaction should be electrostatically attractive.

What potential stabilization might be derived from an intramolecular hydrogen bond in cis-HONO, is counteracted by strain generated by the bad geometry. In order for the H and the distal O to get close enough to have a bonding interaction, cis-HONO starts to suffer from van der Waals repulsion between the two oxygen atoms. Note that cis-HONO is higher in energy than trans-HONO on your table.

Not the answer you're looking for? Browse other questions tagged bond stereochemistry or ask your own question.

1
Bond angle of nitrous acid
22
Is carbonyl-enol tautomerization only intermolecular or can it be intramolecular?
4
Examples of intramolecular hydrogen bonding closing bond angles
-1
The stability of a "Di-onol" - carbonic acid - and analogies to cis-nitrous acid

15
Dihedral angle of gaseous and crystalline HOOH
8
Dibromomethane bond angles
2
Is there a clear distinction between the various intra- and intermolecular interactions?
5
How many stereoisomers are possible for hepta-1,6-diene?
19
Why is an ionic bond a chemical and not a physical bond?
3
Why does having identical groups on either side of the pi bond lead to no geometrical isomerism?