I was reading about the Steric Number Formula here.

There, I came to know that the

I was trying to apply the formula to $\ce{HNO_3}$ with lewis structure: 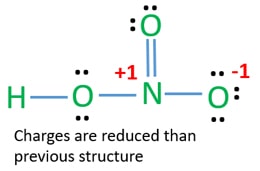 Also, my friend says that the steric number is the half of

You are indirectly using the formula already stated by TRC though I am trying to make your formula accurate and unambiguous (especially because of the efforts you have put into the question).

V=original (ie when an atom is isolated (not experimentally possible for all atoms)) valence electrons on the central atom.

M=Number of atoms directly bonded to X through a single bond.

T=Number of atoms directly bonded to X through a triple bond (use the example of $\ce{HCN}$ to check this).

I=Number of positive charges (formal charge) present on X atom (take I negative if the charge is negative).

Don't consider/take into account 'D=Number of atoms directly bonded to X through a double bond.'

As per Buraian's suggestion, you may apply this formula for all the examples available here. Scroll down and find AXE method in that see the second table last row.

3
Is there a shortcut method to calculate the Steric Number?

20
Do ligands with a positive charge exist?
4
How is the charge of covalently bonded atoms determined?
2
Where does the extra electron come from in the Lewis Dot Electron structure of say for example nitrate ion?
1
How does a carbocation have a positive charge?
8
The logic for hybridisation formula
3
How to calculate the hybridization of ethane with H=½[V+M-C+A]?
3
Is there a shortcut method to calculate the Steric Number?