Can a multi-species system oscillate around equilibrium?

In reading about chemical oscillations such as those that occur in the Belousov–Zhabotinsky reaction (BZ), it's often reported that these reactions were initially not taken seriously, because of a result that a homogeneous system cannot oscillate around its equilibrium point. It is usually claimed that the assumption of detailed balance guarantees this. I want to understand this result, but I can't find any specific references to it.

Kondepudi and Prigogine (2002) imply that the argument is as follows: for a single reaction, one cannot move from one side of the equilibrium to the other without passing through the equilibrium. Once the system reaches equilibrium it can't then keep on reacting, as this would contradict the second law, and therefore an oscillatory approach to equilibrium is impossible in such a system.

This of course makes sense for a system that only involves one reaction. However, for a system in which multiple reactions can take place it doesn't seem to be enough. For example, let's imagine that I have reactions $\ce{A <=> B}$, $\ce{B <=> C}$ and $\ce{A <=> C}$, whose kinetics are determined by some complicated set of catalytic effects. Let's also suppose that the Gibbs energies of A, B and C are the same, so that the equilibrium contains all three reagents in a 1:1:1 ratio.

Now it doesn't seem impossible that I could start off with a high concentration of A and watch the following sequence of events:

If I were to plot the concentration of the three reagents against one another as a 3D plot, it would look something like this (with apologies for my shaky drawing) 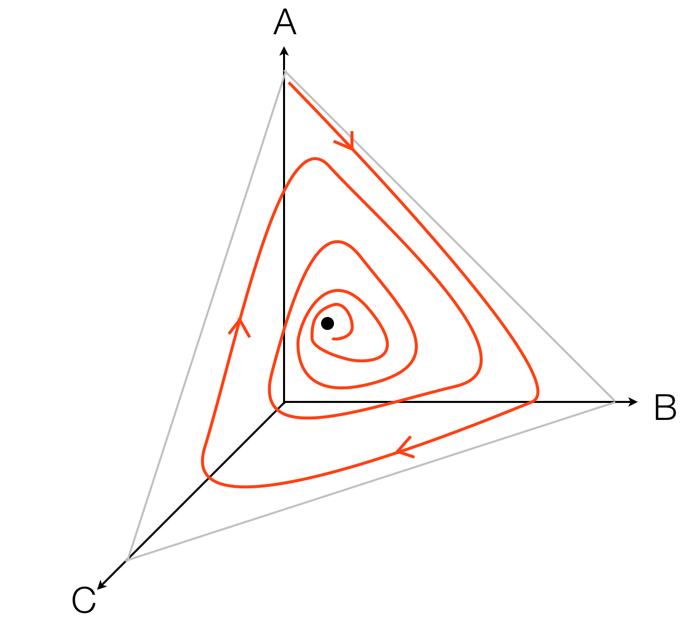 If a system behaved this way, it would be an example of oscillations around equilibrium in a multi-reaction system. My question is, is there a result that says this cannot happen, if we assume the kinetics obey detailed balance at the equilibrium point?

If so, what is it called, how is it derived, and where can I read about it? If not, is there a known example of a chemical system that does approach equilibrium through oscillations in this way? (A 'toy' system will do, as long as the kinetics obey detailed balance.) Note that the BZ reaction is again not an example of this, since its oscillations do not take place around the equilibrium point.

Perhaps part of the argument is that the reasoning described by Kondepudi and Prigogine must hold for each reaction, independently. For the three-reagent system I described, this seems to be enough to rule out oscillations around equilibrium: the $\ce{A <=> B}$ reaction cannot pass through its equilibrium point, regardless of what happens to the concentration of C. But for a four-species system this no longer seems true: then the $\ce{A <=> B}$ reaction can move away from its equilibrium, as long as it's coupled to the $\ce{C <=> D}$ reaction. If oscillations around equilibrium really are impossible in every conceivable system this seems quite non-trivial, and it would be nice to see a proof.

The comments have already mentioned one problem with the question: the trajectory of the example system includes both exergonic (OK) and endergonic (not OK for closed systems) stretches. Think about the total Gibbs free energy of the example with time. The regions where the trajectory is moving away from the equilibrium point are endergonic (i.e. free energy is rising) and would not be allowed unless work is being done to the system somehow.

The other problem is ambiguity in what is meant by "around" equilibrium. Passing through the equilibrium point isn't allowed -- almost by the definition of equilibrium. Gibbs free energy would have to rise (i.e. an endergonic process would be required) after reaching equilibrium.

Orbits "around" equilibrium that always spiral closer to it would potentially be OK. But it depends on exactly what variables are in the orbit. Obviously, Gibbs energy must always decrease in an equilibrating system. Concentrations don't necessarily have to. A good graph is this one: case A is disallowed by the second law, but case B isn't.

The page where I found that graph does a good job of explaining the topic in much more detail: see here. They present chemically feasible reaction mechanisms that lead to oscillations.

8
What are the possible concentration pathways for a 3-species system?
11
How does an oscillating reaction work?
3
Equilibrium of more than two inter reacting species
1
Equilibriums and Overshooting

8
What are the possible concentration pathways for a 3-species system?
4
Equilibrium constant. Can it be reached?
3
Principle of detailed balance
11
How does an oscillating reaction work?
0
Can precipitation reactions attain equilibrium?
2
The effect of dilution on the rate of a system in equilibrium
1
How does the rate equation account for solids and liquids?