How does sulfuric acid dehydrate sugars?

I know sugars have $\ce{-OH}$ groups, and that sulfuric acid is a strong acid. What I'm failing to see is how exactly sulfuric acid dehydrates sugars. Does it protonate the hydroxyl groups, making them good leaving groups? What about the case of sucrose?

For example, how are the oxygens "taken care of" by the sulfuric acid? Are they doubly protonated? Is there some established mechanism for the dehydration of sugars by sulfuric acid, because I can't find any - I just find general equations and I've looked on Google and through textbooks. 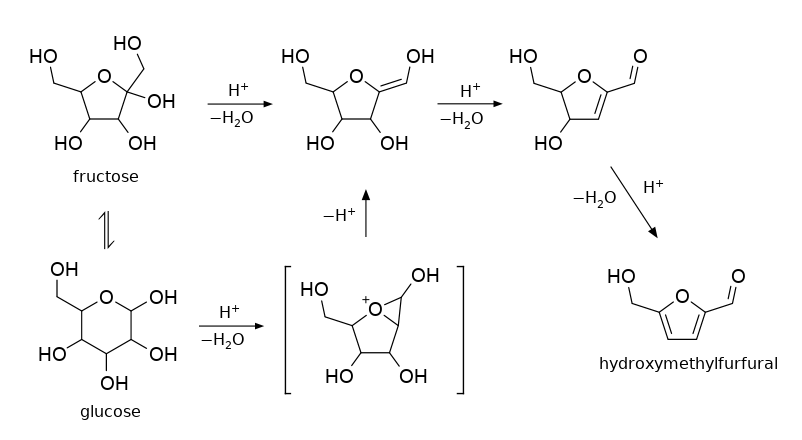 (Stereochemistry omitted. Glucose is more stable than fructose, is reported to follow the path by isomerization to fructose (via acyclic endiol) in this conditions, or a via another mechanism proposed:[2] C-2 (in glucose numbering, i.e. C-3 in pyrane numbering) with protonated OH group is attacked by pyrane oxygen, forming intermediate oxiranium ring…)

HMF then polymerizes (possibly together with other byproducts like levulinic acid) to form rather insoluble humin, whose fragment may look like:[3] 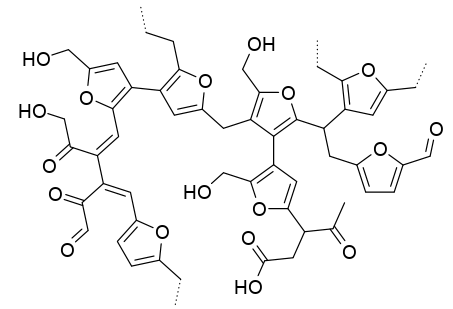 I don't know if it's possible for such structure to be further dehydrated to carbon, under non-pyrolytic conditions.

I think sulfuric acid is hygroscopic. When you put sugar in it, it will take out water of crystallization from it and if not, most probably it will dehydrate it by taking $\ce{-OH}$ groups from it.

2
Output of the Sugar & Sulfuric Acid Reaction?
0
Why Does Adding Catalyst Slow Down My Reaction?

3
Is this the correct mechanism of the formation of the nitronium (NO2+) ion from sodium nitrate and sulfuric acid?
6
Ketone to alkene regiochemistry
17
Reduction of glucose to hexane with hydroiodic acid
8
Weird Wikipedia Section on Oxidizing Behavior of Nitric and Sulfuric Acids
11
Esterfication of 2,2,2-triphenylethanoic acid
2
What is the complete reaction for Cyanide ions reacting with Thiosulfate?
2
Ester as a side product in the synthesis of bromoalkane from alcohol. Is it correct?
6
What's the most appropriate name for this reaction?
4
p-Nitroaniline reaction with sulfuric acid
3
What role does carbon play in the calcination of strontium carbonate in step 1 of the strontian process?