I think cyclohex-2-en-1-one and cyclohex-3-en-1-one should undergo tautomerism as shown below: 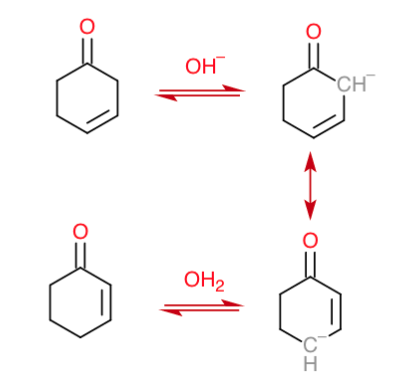 I'm calling it tautomerism because of it's similarity with the tautomerism mechanism in basic medium. I can't draw reaction mechanism arrows using the software I'm using, but what I've shown is that the base abstracts the hydrogen at the alpha-position of the carbonyl group in the first step to form a carbanion, which has multiple resonance structures. The structure I have shown can abstract a proton from water to form cyclohex-2-en-1-one, which I believe should be the predominant form among the two (and among the enol forms as well).

Is this correct? I've never seen anything similar before so I'm a bit skeptical. A similar mechanism can be shown in acidic medium.

Browse other questions tagged organic-chemistry isomers tautomer or ask your own question.

1
Find the major products when these cyclohexenone bromides react with caustic potash in alcoholic medium:

2
alpha-hydrogen atom and keto-enol tautomerism
18
(Computationally) finding similarity between two organic compounds
4
Why are acid catalysed reactions of carbonyl compounds reversible?
11
Birch reduction of anisole
2
Can someone confirm and/or correct my logic regarding this mechanism?
0
Tautomerism in alkenes
3
Reaction of cinnamic acid with Br2/Na2CO3
2
Keto-enol tautomerism in a bicyclo compound
0
Elimination reaction mechanism decision (order = 1 or 2)