While studying about atomic trends, I encountered the Lothar Meyer curve:

If the covalent radius decreases across a period, why is the graph of atomic volume reaching local minima halfway in the period?

And how did he measure the atomic volume by the way?

It is an interesting question, and I am not completely sure on everything I write below.

First of all, atomic volume is defined as the "quotient obtained by dividing the atomic weight of an element by its specific gravity". (Merriam-Webster) It is interesting to note that I could find only a few publications that have the term "atomic volume", and most of the references are from 1980's. So, it seems that the use of atomic volume has almost disappeared from mainstream chemistry, except perhaps a few niche areas.

But anyway, let's look at the trend you showed in the question. The atomic volume is the largest in the alkali metals and smallest in the middle of the period. From Chemistry of the Elements1: 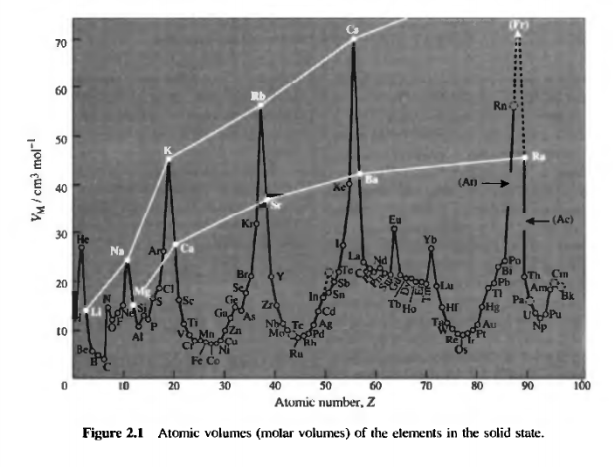 Fig 2.1 shows a modern version of Lothar Meyer's atomic volume curve: the alkali metals appear at peaks and elements near the centre of each period (B,C; Al, Si; Mn, Fe, Co; Ru, and Os) appear in the troughs. This finds a ready interpretation on the electronic theory since the alkali metals have only 1 electron per atom to contribute to the binding of the 8 nearest neighbour atoms, whereas elements near the centre of the period have maximum number of electrons available for bonding. ... Closer inspection reveals that a much more detailed interpretation would be required to encompass all the features of the curve which includes data on solids held by very diverse types of bonding. ...

As the number of unpaired valence electrons is the highest in the middle of a period, the packing is strongest there and the atomic volume is lowest. It's likely that the trend is atomic radius becomes negligible compared to this effect in solid state.

Not the answer you're looking for? Browse other questions tagged atoms atomic-structure atomic-radius or ask your own question.