How is the vibration of multiple atoms treated in vibrational spectroscopy?

Most of the advanced undergraduate textbooks on physical chemistry/ instrumental analysis show the case of a diatomic harmonic oscillator and derive formulae for predicting the frequencies. The concept of reduced mass and force constant is also illustrated for simple atoms. The concept of reduced mass is limited to a two-body problem, although Wikipedia says that it can be generalized for multi-body problems. Reduced mass,

Similarly, the force constant is limited to two bodies; e.g., it is a typical teaching exercise to calculate a force constant from experimental vibrational frequencies.

I was wondering about more complex examples, such as aromatic ring breathing picture from here. The number 1 and 15 is the notation of Wilson for normal modes. 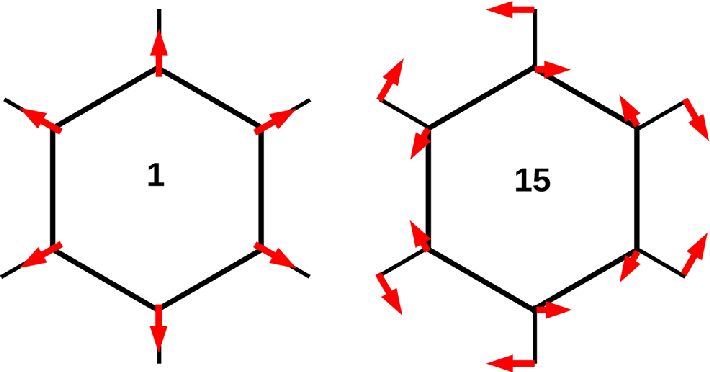 For example, how do physical chemists or theoreticians predict the vibrational frequencies where six atoms are executing harmonic motion (i.e., what methods are used to solve such problems?). I wanted to see an elementary exposition of such treatment, perhaps as a solved example in a good reference which does not need computer programs or fancy tools.

Is the generalized reduced mass still useful in polyatomic vibrations, and how is the concept of force constant generalized to more than two atoms? Thanks.

Vibrational spectroscopy and normal modes are based on the Born-Oppenheimer approximation and the harmonic approximation.

If we knew the exact potential energy surface $E(R)$, then we could try to solve the problem numerically without the harmonic approximation. But doing so is very expensive for a large amount of degrees of freedom.

A short remark on what I have not done is also in order. I have not separated the nuclear coordinates into translation, rotation and vibration thus far. Six(five for linear molecules) of the normal coordinates that we will obtain are going to describe translation and rotation. They are typically easy to recognize by their associated angular frequencies that are almost zero.

Now back to the problem. I will now drop the superscript harmonic. Our harmonic vibronic Hamilton operator is not a sum of 1D Harmonic oscillator Hamilton operators, but we can achieve that by doing some coordinate transformations.

In this equation we still have coupling between different $x_{i/j}$ due to off-diagonal matrix elements in the mass weighted Hessian. But we can eliminate these by transformation to a coordinate system in which the matrix is diagonal. To find these coordinates we solve the eigenvalue problem $$ FV = V\Lambda $$ where the matrix $V$ contains the eigenvectors of $F$ as columns. $\Lambda$ is the corresponding diagonal eigenvalue matrix.

The eigenvectors of the mass weighted Hessematrix are orthogonal and if normalized form a orthonormal set. This means that $VV^T=1=VV^{-1}$. Which means that $F$ can be diagonalized via $$ \Lambda = V^TFV $$

Expanding this equation shows that we now have a simple sum of harmonic 1D Hamiltonians since the Eigenvalues matrix is diagonal $\Lambda_{ij}=\delta_{ij}\Lambda_i$ and no longer couples different coordinates.The last step is recognizing that each 1D equation is the same as a harmonic oscillator equation with $\omega_i^2=\Lambda_i.$

Meaning that our large coupled problem finally has taken the shape of a sum of 3N one dimensional harmonic oscillators, which we know how to solve analytically.

At this point I'd like to repeat that we have not separated translation and rotation. Due to this, the first six frequencies should be zero (or almost zero). The six normal modes corresponding to these zero eigenvalues are not oscillations and have to be omitted when calculating vibrational transitions.

It is possible to remove them before transforming to normal coordinates. How this is done is described in the book of Wilson, Decius and Cross, Molecular vibrations but discussing these points goes beyond the scope of my answer.

Let me now address how all of this connects to the figure that you show in your question. In particular how we know how the atoms are displaced relative to each other for a given normal mode.

This means that the columns of the matrix $$\begin{aligned} K &= M^{-1/2}V \end{aligned}$$ describe the relative cartesian displacement amplitudes of the normal modes, easily seen by plugging in a unit vector for Q.

If we had calculated benzene then one of the columns of $K$ would contain the relative displacements as shown in your figure. Some quantum chemistry programs also print these column vectors after some sort of normalization, when they output Cartesian normal modes and use them for visualization.

Now let me say a bit about reduced masses and force constants. First of all reduced mass and force constants are no observables. They are helpful quantities that we can define to make the analogy to a 1D system with a mass attached via spring to a wall. Depending on the particular conventions that we use, we will obtain different values. A common convention is to define a reduced mass based on the Cartesian displacement vector norm. The normal mode vectors as I have defined above are assumed to be normalized to one with regard to mass weighted coordinates. A mass weighted normal coordinate vector of norm one corresponds to a displacement of atoms such that all displacements squared, multiplied with their atomic mass then summed and the root taken yield 1. Take as an example one mode with many heavy atoms contributing to the motion and a mode where mostly light atoms contribute to motion. If both modes have now a normal coordinate value of 1, you would observe spatially when looking at the atom displacements, that the mode with the heavy atoms is only a little displaced while the mode with light atoms shows larger displacement.

We can however introduce a new coordinate that is constructed in a way that a value of 1 means always the same net spatial displacement of the atoms contributing to the mode irregardless of the mass of the contributing atoms.

I am afraid you need a computer to do all of this or at least a very long breath and patience. I think for some systems the diagonalization can be done manually if you use symmetry, breaking down the matrices that have to be diagonalized to managable size, but generally you are going to let a computer do the linear algebra parts. I am pretty sure that is also the reason why almost all texts only discuss the trivial linear case where everything can be done by hand, although that is problematic since the simple case doesn't give you much intuition for the more general case.

All of this is also explained in the white paper https://gaussian.com/wp-content/uploads/dl/vib.pdf

I would not recommend the book from Wilson, Delcius and Cross as first reference. The book is good if you already have some understanding of the matter but as first exposition it might be difficult. It is however a good source if your are interested in internal coordinates and a treatment based on internal coordinates and the problem of separating vibrational and rotational degrees of freedom.

Not the answer you're looking for? Browse other questions tagged theoretical-chemistry reference-request ir-spectroscopy or ask your own question.