Why can the lone pair not align with the phenyl moiety in 2,6-xylidine?

I am told that for 2,6-xylidine (2,6-dimethylaniline), the amino group cannot line up in such a way that its p-orbital is parallel with respect to the p-orbitals of the carbons in the ring. 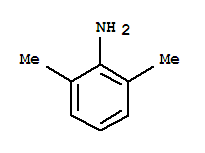 I've looked for papers and no one has actually proved to me why I should believe that two methyl groups are bulky enough to interfere with the amino group. I've come across various statements regarding this molecule, but no proof. For example, here's a Wiki article on steric hinderance and resonance.

But there are no citations to back any of that up.

The closest I've found is:

But note again – there isn't really any demonstration – just a statement.

Am I supposed to do some Euclidean geometry and use van der Waals radii and trigonometry or something?

There is no prove for this statement, as it is most likely incorrect for 2,6-xylidene. This is based on an electronic structure theory approach. However, there are non-negligible steric interactions, that affect the basicity as demonstrated in Ortho-effect in substituted aromatic acids and bases.

Whenever a distance between two atoms becomes (significantly) shorter than the sum of their respective van der Waals radii, this has to be considered. Because of the strain in the xylidene molecules, this is the case.

As a very rough estimate you can use the pen and pencil approach with tabulated values for van der Waals radii (german - much better overview) and covalent radii. Another approach is building the molecule with a molecular modeling set (Molekülbaukasten - german wikipedia), rotate and wiggle bonds, to see if there are any close contacts. There is also some free software that lets you build molecules and check them, they usually come equipped with a set of standard bond lengths and angles. It is always a good approach to visualise a molecule.
If you have access to quantum chemical tools you can perform calculations, but this is usually too much of an effort. For this educational purpose I ran some quick calculations, though.

Now we can have a look at the optimised (DF-BP86/def2-TZVPP) geometry of the molecule. (Of course the pen and paper approach will result in a different geometry.)

Here you can see, that the $\ce{H\cdots{}H}$ distance is very close to the sum of the van der Waals radii. The $\ce{C\cdots{}H}$ distance with about $2.5~\mathrm{Å}$ and the $\ce{C\cdots{}N}$ distance with about $2.9~\mathrm{Å}$ are already shorter than the sum f their van der Waals radii. While these interactions are not strong, the will effect the behaviour of this molecule in solution (and gas phase). It is very important to understand, that these are only snapshot values. In reality the molecule is very flexible and bonds will rotate and vibrate. Steric interactions are basically electronic and dispersive interactions in disguise - they are most likely to influence the kinetic behaviour of a molecule.

The best evidence for this is the transition state of the rotation of the amine moiety. Here we can clearly see a bonding interaction between the nitrogen and the neighbouring hydrogen (see linked post), which is evidently influencing the basicity of this molecule. 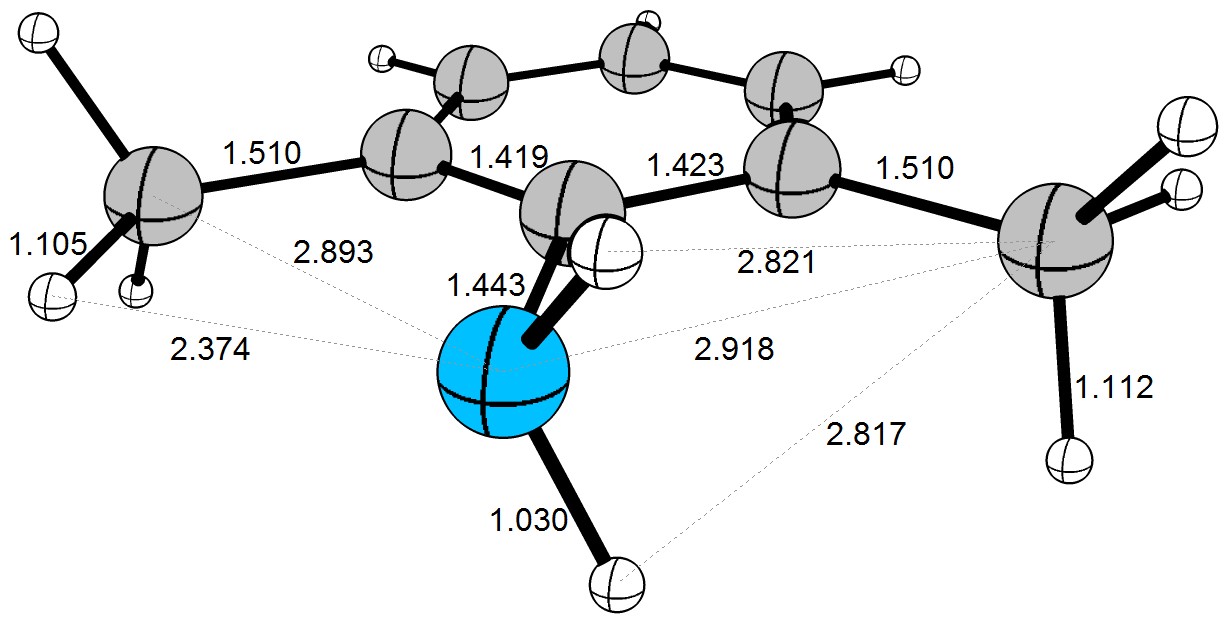 This state is only about $7~\mathrm{kcal/mol}$ higher in energy, which means it is readily accessible at room temperature. This will mean that there are many different conformations present, there is no true one. This affects the reactivity of a molecule (in this case lowered basicity).

In conclusion, your gut feeling was correct. However, there are more effects at play and the whole picture is often not easy to see. It is usually a case by case decision/ interpretation how strong which effects affect reactions and molecules (properties and barriers). When substituents get larger the more dominant steric effects will obviously be.

I hope this answers your question sufficiently.

There are a number of different experimental parameters that you could check to attempt to find out more about 2,6-xylidine 1. I performed a few literature searches on different ones. For the remainder of this answer, xylidine is always taken to mean 2,6-xylidine.

Naturally, the first idea of mine was to look up crytal structures. Unfortunately, xylidine is a liquid at room temperature, which may explain why I was unable to find a structure of the delinquent itself. Instead, I found a number of metal-coordinated xylidines. Hu, Mains and Holt investigated copper(I)-iodide clusters, and amoung them solved the structure of $\ce{[Cu4I4(MeCN)2(L)2]}$ 2 ($\ce{L} = \text{xylidine}$).[1] The structure is shown in figure 1. 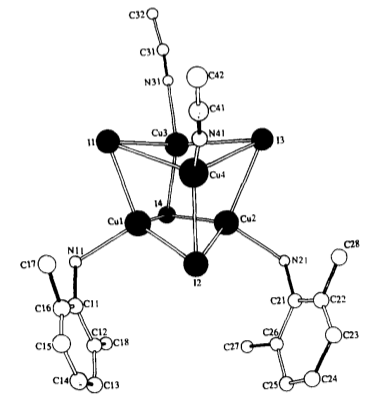 From their molecular analysis, $\ce{C20H28Cu4I4N4}$, it is evident that xylidine is a neutral (not anionic) ligand in this complex. The structure shows how the $\ce{N\bond{->}Cu}$ is almost perpendicular to the phenyl ring. This suggests a (possibly distorted since the positions of the hydrogen atoms are not determined) planar amino group as in the first of Martin’s structures. 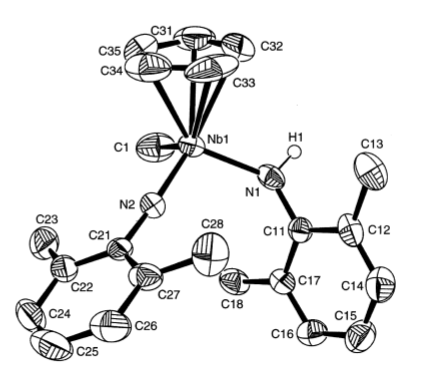 This structure, while a position of the xylidide hydrogen has been determined, has less informative value with respect to the configuration of the amino group: The oxidation state of niobium ($\mathrm{+V}$) is rather high making it rather small and the abstraction of a hydrogen means that an $\mathrm{sp^2}$-type hybrid orbital is used for coordination. Altogether, this means that this structure — while displaying an out-of-phenyl-plane lone pair — is less representative of xylidine and should be considered a representative of N-tert-butylxylidine instead. It should not be surprising that that molecule would adopt a perpendicular amino group rather than a planar one.

After analysing crystal structures proved unsatisfactory, I turned my attention to NMR shifts. Both xylidine[3] 1 and aniline[4] 4 are featured in the spectral database of organic compounds (SDBS). The corresponding chemical shifts are given in table 1.

In my opinion, these differences in chemical shift are minor. The slight upfield shift of the xylidine signals may, in my opinion, be attributed to the $+I$-effects of the two additional methyl groups which, according to theory, affect the meta protons most. Otherwise, hardly any difference can be observed. This seems to point to a structure of xylidine with a mostly planar amino group with respect to the phenyl ring.

Somewhat surprisingly, xylidine 1 has the lowest $\mathrm{p}K_\mathrm{a}$ value — surprising because a lower value should indicate a higher acidity which should indicate a better stabilised free base which does not fit with conjugation and the $+I$ effect of the methyl groups. However, we may also notice that the difference betweeeen xylidine 1 and aniline 4 is small, while methylamine 6 (which I chose in place of ammonia due to the presence of a carbon atom) differs by about $5{-}6$ logarithmic units making it substantially different. The significantly increased acidity of aniline 4 with respect to methylamine 6 is often explained with the delocalisation effect of the phenyl ring.

This opinion has, however, been contested. What we often fail to acknowledge when determining $\mathrm{p}K_\mathrm{a}$ values of phenyl-substituted heteroatoms is the significant difference in electronegativity between $\mathrm{sp^2}$ and $\mathrm{sp^3}$ carbons. Thus, one could say I am comparing apples and oranges when lumping methylammonium’s and anilinium’s $\mathrm{p}K_\mathrm{a}$ values into a single analysis. In fact, the difference between these two is lower than the difference between phenol and cyclohexanol with respect to the acidity constant.

For that reason, I included the seemingly unrelated N,N-dimethylaniline 5, trimethylamine 7 and 2-(dimethylamino)prop-1-ene 8 in the list of $\mathrm{p}K_\mathrm{a}$ values. Compound 8 features a nitrogen atom bound to one $\mathrm{sp^2}$-hybridised carbon and two $\mathrm{sp^3}$ hybridised ones. This is the same carbon types as 5 features with the exception that 5 also features a phenyl ring which is predicted to support delocalisation of the lone pair. Indeed, the difference in $\mathrm{p}K_\mathrm{a}$ values between the conjugate acids of 5 and 8 is significant — $3.2$ logarithmic units — which shows that resonance must feature an additional stabilising effect.

Crystal structures were badly unsatisfactory for determining the structure of xylidine 1. The NMR analysis suggests a strong structural homology to aniline 4. Most notably, however, the $\mathrm{p}K_\mathrm{a}$ values of the conjugate acids 1, 4, 5, 6 and 8 as summarised in table 2 show a clear trend which indicates that 1 should be structurally very similar to 4 featuring a delocalised p lone pair and not similar to 6 with a localised lone pair. The high acidity of 1’s conjugate base cannot be explained with an $\mathrm{sp^2}$ carbon alone. I thus am inclined to believe that xylidine’s amino group is complanar with respect to the phenyl ring and that the lone pair participates in the π system.

A simple space-filling model shows the plausibility of the effect being steric interaction between the methyl groups and the amino-hydrogens.

This view is a non-optimised space-filling picture of the molecule generated by Chemdoodle: 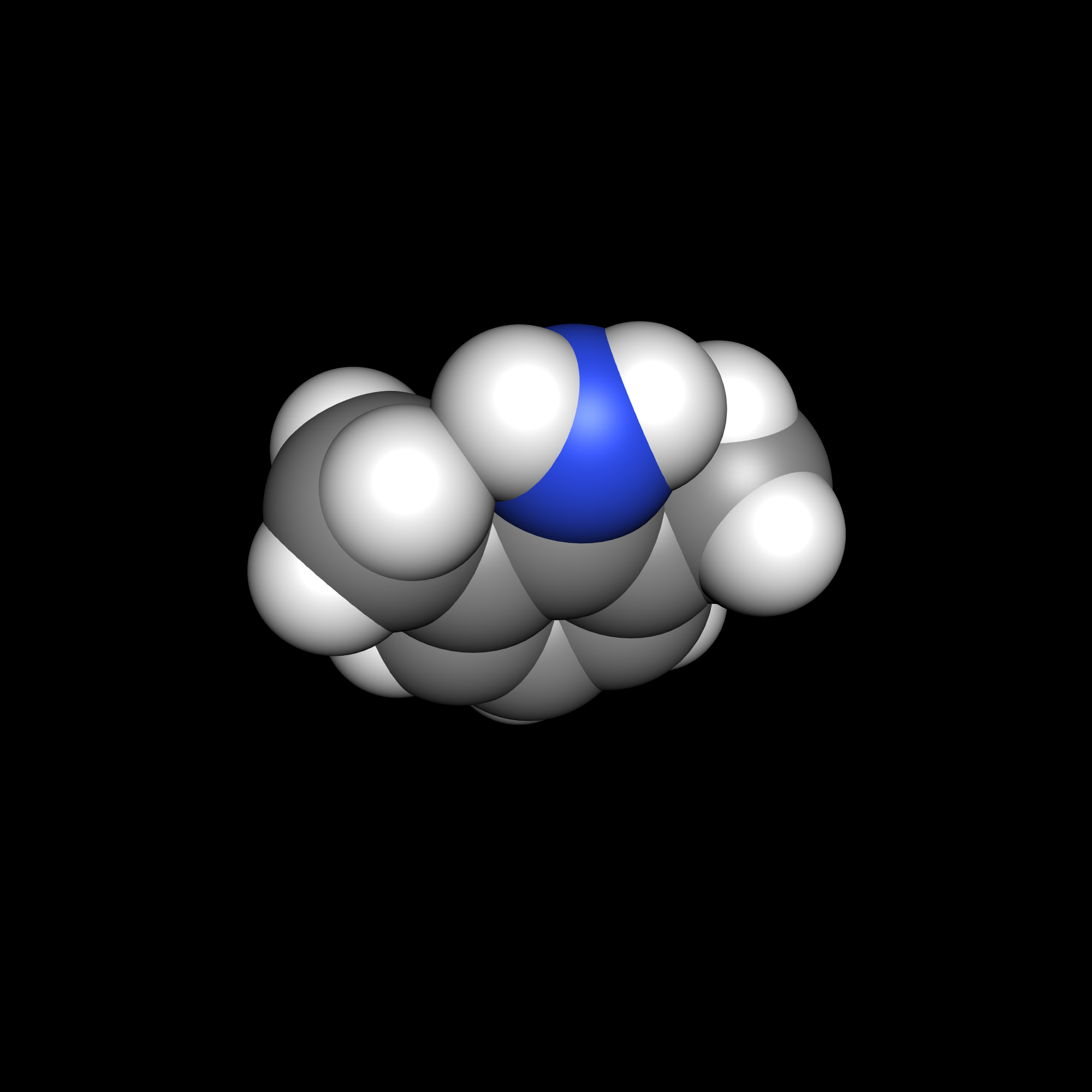 Even this crude picture shows the plausibility of significant spatial interaction between the left hand methyl group and the amino hydrogens. This is likely enough to constrain the orientation of the amino group giving the effect you query.

75
Ortho-effect in substituted aromatic acids and bases
10
Inductive vs resonance effects and the acidity of phenol
8
Which of these carbocations are more stable?
1
Why does the ortho effect not work here?

13
Does unsubstituted benzoic acid not show resonance due to steric effects?
16
Why is a hydroxyl group more activating than a methoxy group in electrophilic aromatic substitution?
3
How to determine the order of acidity of the following dimethyl nitrophenols
0
Steric Inhibition of Resonance in ortho-substituted Benzoic Acids
2
Reaction of 1,3-dimethyl-2,5-dintrobenzene with NaOMe/MeOH