Reaction of cyclooctatetraene with sulfuric acid

(A) P & Q are aromatic compound and Q has sp3-hybridized carbon atom.

I got P easily; the two $\ce{K}$ atoms would lose two electrons and form the cyclooctatetraene dianion, which will become planar and aromatic with 10 π electrons.

However, I could not find what Q will be. My first step was a proton getting attached to one carbon of any of the four $\ce{C=C}$, which will give $\mathrm{sp^3}$ hybridization on that carbon which accepted the proton. There will now be another adjacent carbon with a positive charge on it, which will be delocalized through the 6 π bonds.

However, the presence of $\mathrm{sp^3}$ carbon in between will prevent complete conjugation throughout the ring.

In any case, I don't see how Q can be aromatic. What am I missing?

This is a rather unusual and interesting case of aromaticity, which has been given a special name: homoaromaticity.

The Wikipedia page does a quite nice job of explaining what's going on. As you state, protonation of cyclooctatetraene generates a $\ce{C8H9^{+}}$ cation containing an $\mathrm{sp^3}$-hybridised carbon atom between all the other $\mathrm{sp^2}$-hybridised carbons. However, what's surprising is that this does not imply aromaticity must be broken. If you comfortably understand that the cyclooctatetraenide anion $\ce{C8H8^{2-}}$ is aromatic, you probably also know that the tropylium cation $\ce{C7H7^{+}}$ is also aromatic. As it turns out, this aromaticity is sufficiently strong that if you add a $\mathrm{sp^3}$-hybridised $\mathrm{CH_2}$ linkage, the cation pushes the $\mathrm{sp^3}$ carbon out of the way to allow through-space conjugation and maintain aromaticity. 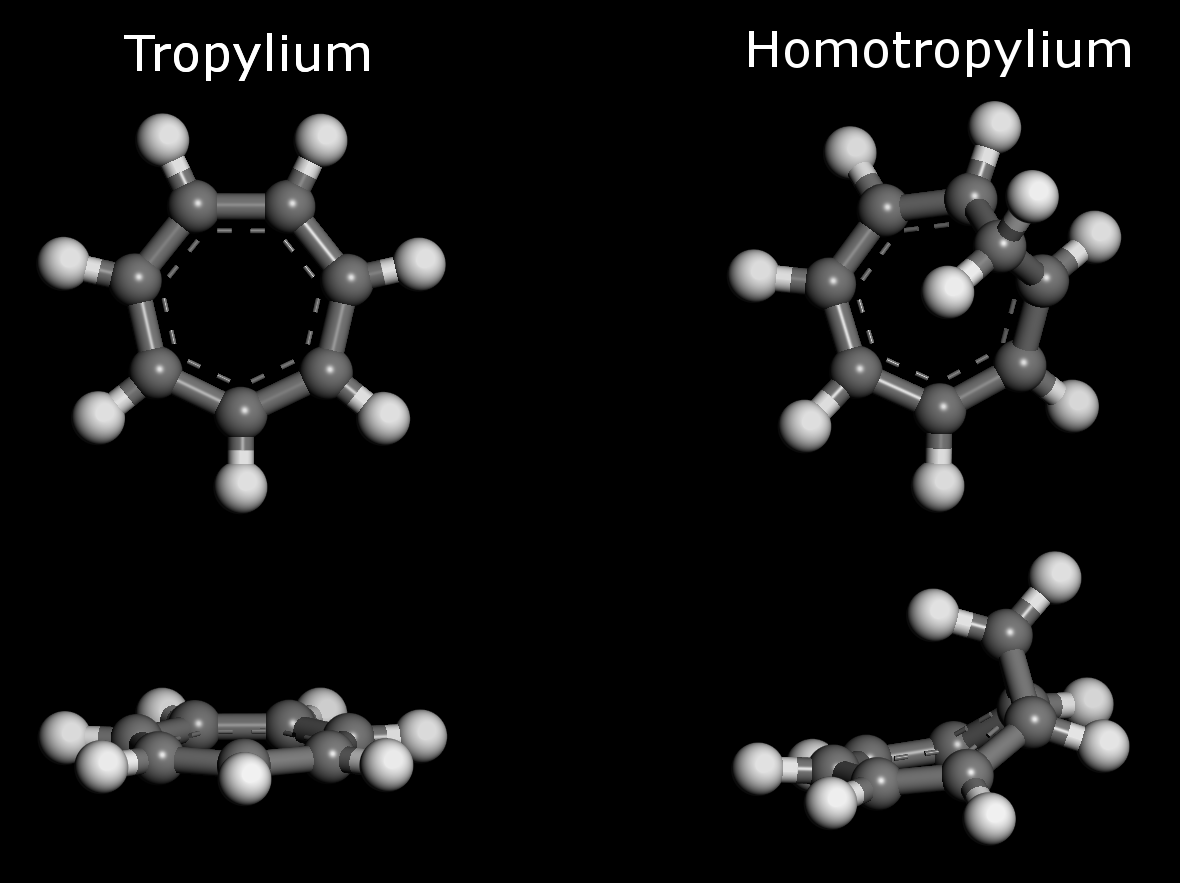 The homotropylium cation is exactly what cyclooctatetraene rearranges into upon protonation. The evidence for the aromatic nature of the homotropylium cation is ironclad. NMR spectrometry is one of the best techniques to determine the presence and strength of aromaticity in a compound, due to aromatic ring currents. In the homotropylium cation, the hydrogen atoms in the $\mathrm{CH_2}$ linkage are magnetically inequivalent, and indeed, starkly so - their $\mathrm{^1H}$ chemical shifts differ by over 6 ppm. In particular, one hydrogen atom lies above the ring and is heavily shielded by the aromatic ring current, generating a signal at -0.73 ppm which is very unusual for a carbocation.

It would be excellent to study the crystal structure of the homotropylium cation, but there do not seem to be any experimental data for examples containing the parent ion, only derivatives such as a hydroxylated homotropylium cation (in fact, I'm surprised the parent ion hasn't been crystallised as a carborane superacid salt). Nevertheless, structural evidence for aromaticity can also be found in the derivatives, in the approximate coplanarity of the $\mathrm{sp^2}$-hybridised carbons and the unusual distance between the $\mathrm{sp^2}$ carbons directly attached to the $\mathrm{sp^3}$ carbon (longer than almost any C-C single bond, but far too short for isolated carbon atoms in the absence of aggressive steric constraints).

Not the answer you're looking for? Browse other questions tagged organic-chemistry reaction-mechanism aromaticity or ask your own question.

8
Reaction of alkenes with bromine in presence of sodium chloride
5
Elimination in α,β-dibromohydrocinnamic acid
17
Reaction of perchloric acid with cyclopropenol
9
Why is cyclooctatetraene non planar but the cyclooctatetraenide anion planar?
5
Why doesn't the bromide anion attack during electrophilic addition of bromine in methanol solvent?
8
Aromaticity of fused rings
4
Formation of enamine for unsymmetrical cyclohexanone derivatives