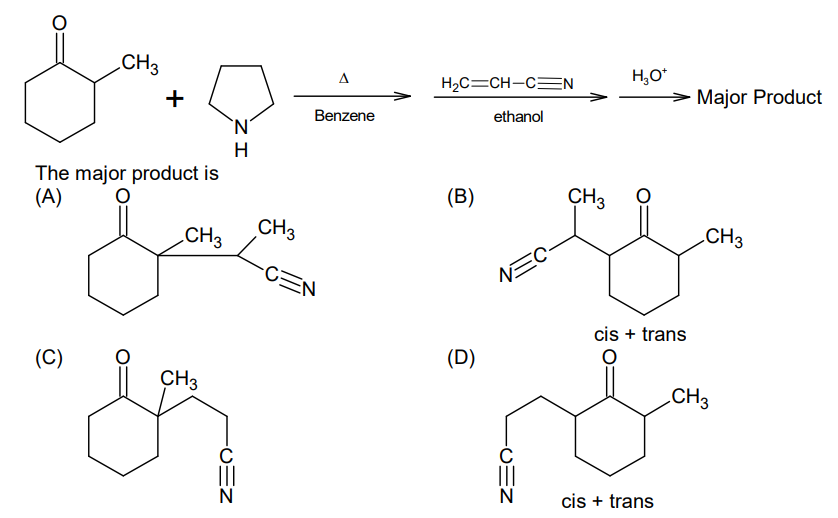 My reasoning - I outlined the following steps in the reaction:

These steps lead to the formation of C. For D to be formed, step 2 must be altered, and the less substituted (and less stable) double bond must be formed. Why does that happen?

I also can see that the nucleophile $\ce{C=C}$ is sterically hindered in step 3. That will lower the yield of step 3. However, that steric hindrance or comfort in step 3 should not affect the formation of $\ce{C=C}$ in previous step 2.

I am also open to the fact that the answer key given might be wrong. But in case the key is right and I am wrong, I would like to know why my step 2 is wrong.

According to this site here citing Carey & Sundberg and Morrison & Boyd

"In case of 2-methyl cyclohexanone, this planarity would cause steric clashes between the methyl group and the pyrrolidine hydrogen atoms. Due to this, formation of the less stable 6-position carbanion is preferred and hence forces reactions to proceed at this position." 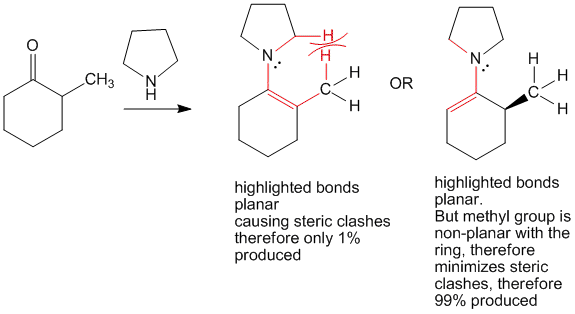 1
Syn Dihydroxylation of Alkenes
17
Rearrangement of a bicyclic dienone under acidic conditions
2
Formation of thermodynamic product from 1,4-addition
19
Mechanism of a dephenylation reaction
10
Monoepoxidation of 1,2-dimethylcyclohexa-1,4-diene using m-CPBA
17
Would the carbocation intermediate undergo rearrangement?
3
The dependency on electron density in the reactivity order of electrophilic and nucleophilic additions