To explain my question a bit better: I added heptane and methanol together in equal ratios (1:1) and observed a separation in phase where there appeared to be an oily layer sitting on top of the other liquid. But when I increased the amount of methanol in a ratio of 1:2 and 1:3 (heptane to methanol), this appearance disappeared.

I understand that heptane and methanol are immiscible, but what led to the change? I apologize if this is something really obvious, but I would greatly appreciate any help.

Methanol is a polar solvent; heptane is very non-polar. If you start with methanol as solvent, you can dissolve a little heptane into it; if you keep adding heptane, you reach the solubility limit of the solute heptane in methanol, and the excess heptane floats.

If you start with heptane as solvent, you can dissolve a little bit of solute methanol into it; at its solubility limit, excess methanol will sink.

Now, when you take methanol and heptane in a 1:1 ratio, both solutes have exceeded their solubility in both solvents, and you should wind up with a heptane layer on top, with a little bit of methanol dissolved in it, and a methanol layer below, with a little heptane dissolved in it. In some cases, a metastable intermediate layer forms, but will separate into the upper and lower layers. (Those molecules just can't get it all figured out instantly!)

The phenomenon is called a miscibility gap, where it seems that two liquids go together but only so far. Data on methanol-heptane were not available, but a phase diagram of methanol-cyclohexane is shown below:

The x-axis goes from zero methanol (i.e., all cyclohexane) to all methanol (no cyclohexane). The large central area is the two-phase region. At each extremity, whether methanol-rich or cyclohexane-rich, there is some solubility, which increases if you raise the temperature, until at about 320K (47$^o$C), the mutual solubility equals complete miscibility, and at this temperature and higher, there is only one phase.

A somewhat different plot (of enthalpies of hexane and methanol mixtures) shows the same kind of miscibility gap. Hexane and methanol are completely miscible above about 45$^o$C, but as the temperature is lowered, mixtures with ratio of 1:1 will separate into two phases. Mixtures with only about 20% of the other solvent are stable at room temperature. But from the chart, it would seem to be a good bet that reducing the temperature will make the miscibility gap even wider. 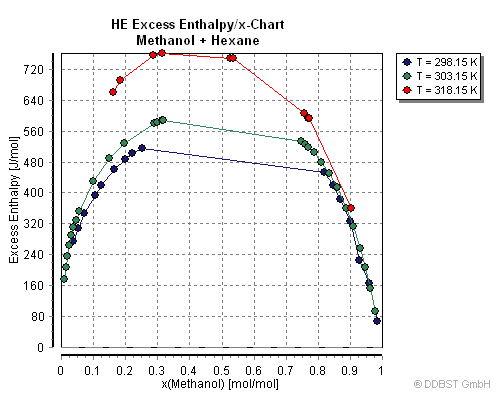 Heptane and methanol are partially miscible though, in heptane methanol system, the mole fraction of methanol is stated to be 0.270 at room temperature.*

Also note that you did not mention the purity of heptane. Low grade heptane from cheaper sources is always contaminated. If you really care with this phenomenon, you have to use the highest purity solvents like LC-MS grade solvents.

Not the answer you're looking for? Browse other questions tagged organic-chemistry solubility solvents immiscibility or ask your own question.