Why does van der Waals' equation of state give only one P, V pair for a particular temperature here?

I came across this question which I initially ignored believing that the data was insufficient:

I saw that I had 2 variables $P$ and $V$ and logically from what I'd dealt with with real gases I concluded that there must not be a unique solution, but the answer (which can be incorrect) mentioned a unique value of $P$.

I tried solving by writing the equation of state:

By writing it as a quadratic in V we get

This implies that not all pressures are feasible since $D<0$ for some values of $P$. But for most other values of $P$, $D>0$ which implies that there are 2 values of $V_\mathrm{m}$ for a certain $P$. But looking at the compressibility factor ($Z$) vs $P$ graphs for various gases I found that for a certain $P$ there was only one $Z$ at a temperature, which means there should be only one solution? So the only possibility is that $D=0$ which yields a fixed value of $P$ and hence a fixed value of $V_\mathrm{m}$. That gave me the right answer.

But that seems really wrong since temperature alone shouldn't be able to dictate a unique state and that also implies that volume or a real gas is independent of the volume of container which sounds terribly wrong.

I strongly feel $D=0$ caused this but I don't see why not.

I would like to observe only the gaseous state, i.e, set the temperature above the Critical Temperature.

Fundamentally, the problem is in the problem statement. The proper form for the Van der Waals equation is

which would give a cubic equation when we try to isolate the molar volume. It is this cubic equation that usually has one or three roots that can be correlated with the possible phases, as described in the other answers. Apparently the bookmakers wanted to simplify the equation to a quadratic one, but in so doing they give it spurious mathematical properties which do not match the physics and thus confuse you.

The quadratic equation is accurate in the limit of high temperature and low pressure, where the liquid volume can indeed be ignored ... for the larger root only. The smaller root in this situation will be smaller than the liquid volume which the full VdW equation models as $b$, so properly putting in that $b$ term would blow that small root out of the water. The small root is not really a root, even approximately.

So pick the larger of the two roots which is the only one that really matches with the proper VdW equation.

The van der Wals expression can be shown graphically at constant temperature by the curve ABCDEFG in following diagramm, if the temperature is lower thant the critical temperature. 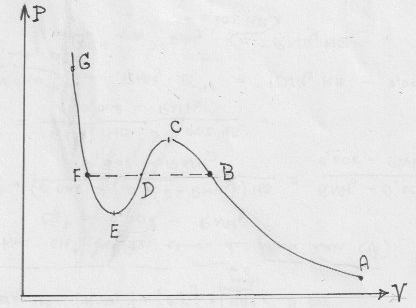 Try to follow the line. Start at A with a large volume of gas and a small pressure. Increase the pressure. The volume decreases from A to B and C. But after C, along CDE, the volume and the pressure decrease simultaneously : this is absurd and ridiculous. Something should be done to explain this stupid CDE fragment. After E, the line EFG makes sense : the pressure must increase to get a smaller volume.

The reason of the nonsense is that when going from A to B, something new happened to the compressed gas. At B, the first drop of liquid appears. The system has to be cooled, but when the volume decreases to V < V(B), the pressure and the temperature do not change. The amount of liquid gets more and more important. When it arrives in F, the gas is totally transformed into a liquid. So the behavior of the system is described by the horizontal line BDF. If on wants to still decrease the volume , the pressure becomes quickly very high, as everybody knows that liquids are nearly incompressible.

Not the answer you're looking for? Browse other questions tagged thermodynamics gas-laws pressure equation-of-state or ask your own question.