Why does iron carbonyl have five carbonyl groups instead of six or four?

When finely divided iron combines with carbon monoxide, we get the complex $\ce{Fe(CO)_5}$.

Why the number 5? It doesn't even relate to the orbital theory wherein we can see the number of empty and filled orbitals.

In organometallic chemistry there is something known as the 18-electron rule, which essentially suggests that stable complexes have an 'electron count' of 18. A general discussion of electron counting is beyond the scope of the current answer, but in the specific case of $\ce{[Fe(CO)5]}$, we have $\ce{Fe(0)}$ which accounts for 8 electrons, and five $\ce{CO}$ ligands which provide 2 electrons each, for a total of 18.

What is the basis behind this rule? I don't like the argument based on 'noble gas configuration': that makes little sense because the orbital structure is not the same as a plain atom.

A better argument is to draw out an MO diagram for the complex. The metal 3d, 4s, and 4p orbitals ($5 + 1 + 3 = 9$ orbitals in total) are involved in bonding with the ligands, and can form bonding + antibonding MOs. Generally there will be 9 bonding MOs which are low in energy, and these can be filled with 18 electrons.

For example, here's the standard MO diagram for an octahedral complex (from Wikimedia Commons). I'm aware that $\ce{[Fe(CO)5]}$ isn't octahedral, but the same principles apply; or you can imagine for a while that we're talking about $\ce{[Cr(CO)6]}$ or $\ce{[V(CO)6]-}$, which are octahedral and obey the 18-electron rule.

The 'low-energy' MOs are the bottom 6, plus the $\mathrm{t_{2g}}$ orbitals which are unfilled in this diagram. Generally the 18-electron rule holds true for strong-field ligands, especially π-acceptors like $\ce{CO}$. The reason for this is because these ligands push the $\mathrm{t_{2g}}$ orbitals down in energy (which is not illustrated in the diagram here, but can be found in any standard inorganic chemistry textbook). 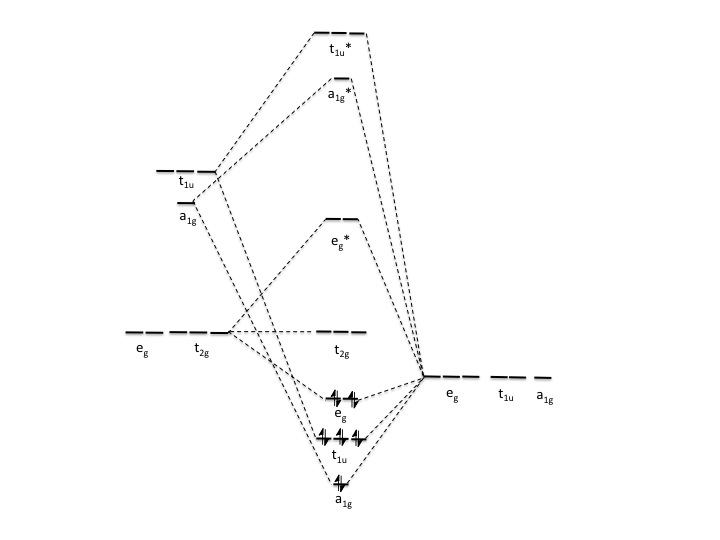 Not the answer you're looking for? Browse other questions tagged coordination-compounds carbonyl-complexes ligand-field-theory or ask your own question.

59
Is iron in the brown ring compound in a +1 oxidation state?
37
Why does carbon monoxide have a greater affinity for hemoglobin than oxygen?
23
How can the intense color of potassium permanganate be explained with molecular orbital theory?
4
Cyanide complexes in Molecular Orbital Theory
8
Shape of nickel tetracarbonyl
3
Is there an 'easy' way to determine if a ligand is a pi acceptor, donor or neutral?