What is the reaction mechanism between acetophenone and ethyl phenylpropiolate to form a 2-pyrone?

I am looking for the mechanism of the following reaction (I believe it is a type of Michael reaction), which is in the textbook "Advanced Organic Chemistry Part B: Reaction and Synthesis" by F. A. Carey & R. J. Sundberg, 4th Ed, Ch.1, Practice question 12. This practice question does not appear at the 5th Ed. 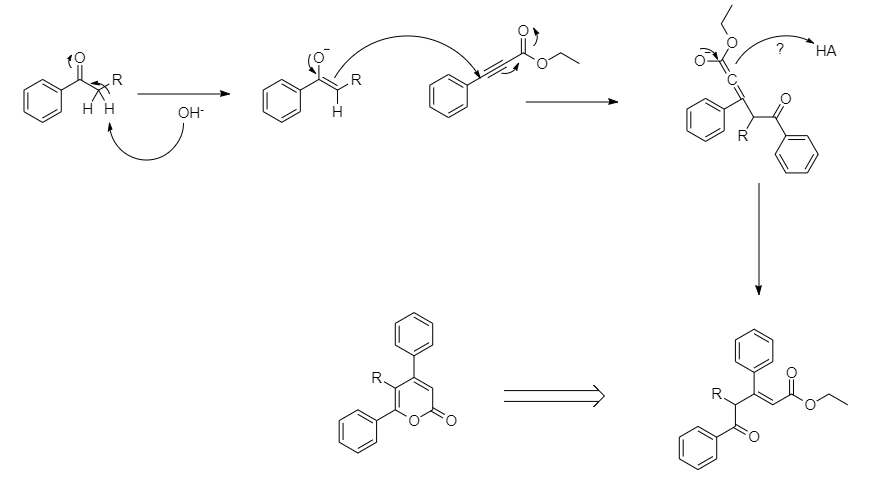 The general idea in the answer above is correct, but some of the details need to be looked at more closely.

The first step is as drawn in the original post. Deprotonation of the ketone, followed by nucleophilic addition to the alkyne gives an allene-type intermediate. Note that the anionic intermediate only has one geometry, it doesn't have cis and trans forms as the other answer suggests. Reprotonation gives us an enone with unspecified double bond geometry (likely a mix).

The final cyclisation involves forming the enolate of the ketone and then a nucleophilic acyl substitution on the ester. But to get there, we first need to make sure of the double bond geometry: the nucleophile (enolate) and the electrophile (ester) have to be cis to one another.

The way to do this is through tautomerisation of the enone. This converts the original double bond to a single bond, which can rotate freely. (There is some barrier to rotation because it is part of a conjugated diene; but the barrier is not that high, certainly nowhere near as high as a double bond, and can be overcome under usual reaction conditions.)

Once we've gotten there, it's just a matter of forming the enolate and kicking out the ethoxide.

Why does the enolate attack via oxygen rather than carbon? A simple explanation is that attack via oxygen forms a six-membered ring, whereas attack via carbon forms a four-membered ring, which is heavily disfavoured. Stereoelectronics also probably play a role: for the attack via carbon to proceed, the C=C π orbitals need to overlap with the C=O π* orbitals. This is almost impossible given the small ring size that would be formed, plus the extra double bond in the ring which makes the geometry of the entire molecule more rigid. On the other hand, the oxygen has lone pairs which point in all directions, so cyclisation is much easier.

NB: When drawing mechanisms, I would always suggest to use the resonance form of an enolate with the negative charge on oxygen. This is more representative of the actual electronic structure. For example, enolate geometry is an important consideration in organic chemistry; also, the stereoelectronic considerations above would be harder to pick out if we just thought it was a plain old lone pair on carbon. From an arrow-pushing point of view it's entirely equivalent, so there are no real excuses to draw a negative charge on carbon.

Your attempted mechanism is correct. There is an active $\ce{\alpha-H}$ in the your final intermediate ($2$ $\ce{-COOEt}$s are present on the carbon (well one of them is attached indirectly, but it still shows it's $-M$ character so it is more or less the same)

The full version of the reaction should look like this (I couldn't find a primary source (like it is for a lot of practice problems)but this is what seems most probable to me ) :- 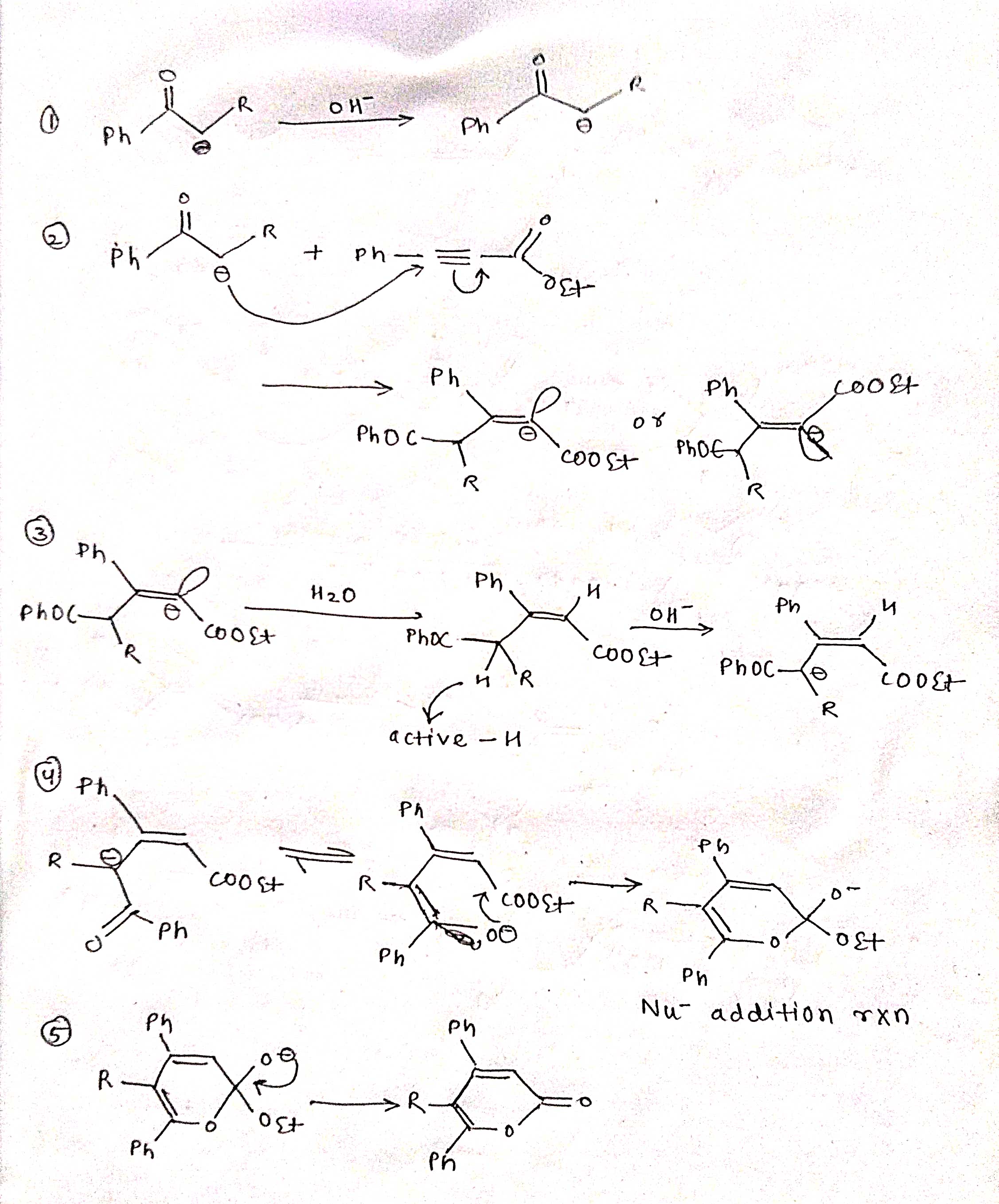 TL;DR : Step 3 is not required since the reaction can proceed without having to form a carbanion intermediate since the rotation barrier is not significant. Step 2 misrepresents resonance structures as different geometries and allene intermediate works best here (also the structures are irrelevant since after protonation it goes directly to step-4)

Addendum :- In response to the mention that enolates usually show nucleophilic addition with the carbon atom and not the oxygen atom (due to a mix of hydration and steric effects), I think here it is possible that nucleophilic addition is done by oxygen due to the stability of conjugated dienes which wouldn't have happened otherwise. Also the reaction by carbon's attack is not possible due to it forming a 4 member ring with a double bond.(However the yield of this reaction may not be a very impressive due to this reason but I am out of my depth regarding that, all I can see is that this should be the major product)

Not the answer you're looking for? Browse other questions tagged organic-chemistry heterocyclic-compounds enolate-chemistry or ask your own question.

51
Regioselectivity of acid-catalyzed ring-opening of epoxides
4
How does the Mosher ester method allow determination of absolute configuration of secondary alcohols
19
What is the mechanism of the reaction between hexane-2,5-dione and nitrous acid?
7
Dependence of rates of neighbouring group participation on length of alkyl chain
0
Is 1,3 alkyl shift allowed in Cyclobutyldicyclopropylmethyl Cation?
2
Effect of chloromethyl substituent vs methyl substituent on yields of nitration