Why were quasicrystals initially so controversial?

I am a mathematician. My (limited) understanding is that quasicrystals are structured as parts of aperiodic tilings of $\mathbb{R}^3$. Such tilings were already known when Shechtman first studied his alloy. So, I was wondering why there were so many accomplished chemists who resisted the idea of quasicrystals.

Were chemists perhaps convinced that, for some chemical (rather than mathematical) reason, any crystal-like material must have a periodic structure?

Edit: I am afraid that I should elaborate further. I am aware of line groups, frieze groups, rod groups, wallpaper groups, layer groups, crystallographic groups, and Bravais lattices, and the history of both mathematical crystallography and tilings. What I am asking is this: Robert Ammann obtained a 3-dimensional aperiodic tiling in 1975. Dan Shechter published his paper in ... 1982? Is that correct? So, my question is, how is it possible for very intelligent people, including Linus Pauling, to still hold onto their assumption that crystals had to be periodic? Was there an actual chemical reason for them to think so?

I would like to thank everyone who is trying to answer this.

So, my question is, how is it possible for very intelligent people, including Linus Pauling, to still hold onto their assumption that crystals had to be periodic?

Linus Pauling advocated for a hypothesis called twinning in which grains of periodic lattice were joined together at an angle, such that you got non-standard symmetries on a large scale that did not exist at the atomic scale. His argument was that there were plausible alternative hypotheses that had not yet been ruled out by the evidence.

While Pauling probably pushed his certainty too far, there is a sense in which this is how science is supposed to work. Confidence in scientific conclusions is only justified when a determined attempt to refute it by competent and motivated opponents has been made and has failed. A hypothesis gains in confidence only as all the alternative hypotheses get rejected. Thus, for any hypothesis to be justifiably accepted, you need systematic sceptics to try to attack it and pull it apart. It's like evolution by natural selection - only the fittest hypotheses survive. So in this, Pauling was acting as a good scientist, trying to pick holes in the theory, and challenge it for as long as it could be challenged.

You should also consider the psychology of people like Pauling. There is a tendency in human social interaction to fit in with the crowd, and follow the intellectual fashion. That's fine for learning and applying what's already known, but is an impediment to discovery. Scientific revolutions are made by mavericks who can stand against the consensus, and who can stick to their own beliefs against all the slings and arrows that the community can throw at them. Pauling was likely as successful in science as he was because he had such a stubborn, contrarian, self-confident personality. Of course, while such a personality is very useful to persist and push your theory against dogmatic opposition when you happen to be right, it can be a drawback for the individual on the occasions that you are wrong. Although, as I said, science needs such people to continually challenge and test the consensus, it is a reminder that we are all fallible, even the cleverest of us. And personality is not the same thing as intelligence.

It's common for a field to take some time to get used to new ideas. Mathematicians took a long time to accept negative numbers and complex numbers. Physicists spent many years after the invention of General Relativity rejecting the possibility of black holes - even Einstein once wrote a paper proving them to be impossible! The German physicist Max Planck said that science advances one funeral at a time. Or more precisely:

A new scientific truth does not triumph by convincing its opponents and making them see the light, but rather because its opponents eventually die, and a new generation grows up that is familiar with it.

The basic problem was that chemists assumed that crystals had to be periodic.

It is probably easier to understand than you think. The chemistry of crystallography and the mathematics of symmetry are tightly related. And chemists always started trying to understand crystal structures based on the fundamental assumption that crystals had to be periodic in their structure. If it isn't periodic it isn't a regular structure, is it?

The problem wasn't helped by the mathematics either. Even for the simpler problem of tesselating the plane many mathematicians assumed that tilings had to be periodic. So, for example, we know that only triangles, rectangles, and hexagons can tile the plane but pentagons cannot (complicated shapes can but the symmetry falls into a small number of categories. I'm simplifying a lot!) Strictly speaking there are 17 possible "wallpaper" tilings with different regular symmetry.

That infinite tilings of the plane without periodicity could exist only emerged in the 1960s and Penrose didn't find the very simple ones we are now familiar with until the 1970s. Before that point chemists, who work in 3D not 2D, didn't even have simple examples of tilings that could exist without being periodic in 2D so they assumed that the same principle applied in 3D crystals. Given the theorems of how regular 3D symmetry can be built in the 3D case they assumed that crystals with, for example, 5-fold symmetry were impossible.

But as the mathematical theory of aperiodic tilings developed, it became more obvious that the false assumption was perfect periodicity. The 2D Penrose tilings show that a plane can be tiled in a way that does not precisely repeat. But does have an approximate symmetry (5-fold in the standard Penrose patterns).

Less than 10 years after the Penrose tiles were discovered, chemists started to recognise the 3D equivalent in crystal diffraction experiments. The big discovery was by Shechtman in the mid 1980s (which eventually won him a Nobel). The realisation that aperiodic structures could form well-defined diffraction patterns led to a change in the very definition of a crystal.

What had held chemists back was the assumption that crystals had to be periodic. But the real-world discovery of this didn't fall too far behind the mathematical theory so we can't just blame chemists for not noticing earlier examples in their diffraction patterns: they didn't have any theory to make sense of them given their assumptions about what makes a crystal.

To extend matt_black's answer by a a few illustrations, imagine you want to tile the floor of your bathroom and have tiles of 2, 3, 4, 5, and 6-fold symmetry and you want to stick to one type only.

As soon as you select the tiles of five-fold symmetry, you will leave space in-between the tiles revealing the background:

These patterns are a simplification, but the same symmetry principles applies to more complicated tiles, too, e.g. the by Angelo Gavezotti: 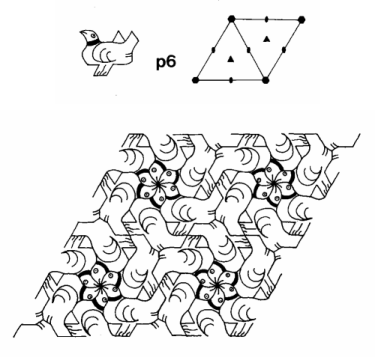 or some of the tessellations by M.C. Escher: 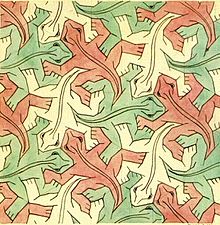 Note how these tiles' orientation are symmetry related. For the classical pattern, you were allowed to move in integer steps from one equivalent position to the other (e.g., reptile of same colour) only by translation. And this distance of translation would apply to all yellow, red, and green reptiles to meet again a yellow, red, or green reptile.

Not the answer you're looking for? Browse other questions tagged history-of-chemistry or ask your own question.