Acid catalysed mechanism of the addition of alcohols to alkenes

Can someone confirm my thought?

The mechanism is acid-catalyzed dehydration, so the acid must be regenerated. Catalysts are by definition not consumed over the course of a reaction. Now, whether the acid is actually sulfuric acid is debatable, and in my mind, unlikely, given the leveling effect and that the solvent is methanol.

Of course, thermodynamic considerations are important, but so are kinetic considerations. Do remember that there is likely a lot more solvent than there is sulfuric acid and substrate (the alkene). So it seems most likely that the acting acid is protonated methanol - it is a lot more likely for sulfuric acid to bump into a methanol molecule rather than an alkene molecule.

The short version: You are correct, the schematic drawing is not the correct mechanism and it does also not provide the most likely path. For a training exercise it is close enough though. It shows the most important steps and it conserves stoichiometry.

The depicted scheme does not show a reaction mechanism in the sense of the definition given in the goldbook. A reaction mechanism always also has to include transition states, that lead to the respective products. It is rather a reaction sequence, that shows the most important steps. In this sense, the stoichiometry has to be conserved and in this sense it is as correct as it could be.

Noteworthy is, that the catalytically active species is not sulfuric acid, but instead a mixture of hydronium and protonated methanol, $\ce{H3+O/H2+OCH3}$. Sulfuric acid is such a strong acid, that it is capable of protonating any solvent that has a lone pair, even itself via autoprotolysis (in concentrated $98\%$ solution). $$\ce{2H2SO4 <=> [H3SO4]+ + [HSO4]- <=> H3+O + [HS2O7]- <=> H2O + H2S2O7}$$ The use of concentrated sulfuric in organic synthesis is usually not advisable, since its dehydration property can quickly decompose many organic compounds that contain hydroxyl groups. The use of diluted sulfuric acid (either in water or alcohols) is therefore much more common.

It is only logical, that sulfuric acid will protonate methanol, which can be considered a preceding equilibrium. $$\ce{H2SO4 + HOCH3 <=> H2+OCH3 + [HSO4]- }$$ Since methanol is also the solvent and the acid is only available in catalytic amounts, it is feasible to assume, that the equilibrium lies entirely on the right.

It is also important, that the last step must be also in equilibrium, since it is only the protonation/deprotonation of an ether. Here again we have much more methanol than product, so that the equilibrium will most likely be entirely on the product side.

A more descriptive mechanism would be the following: 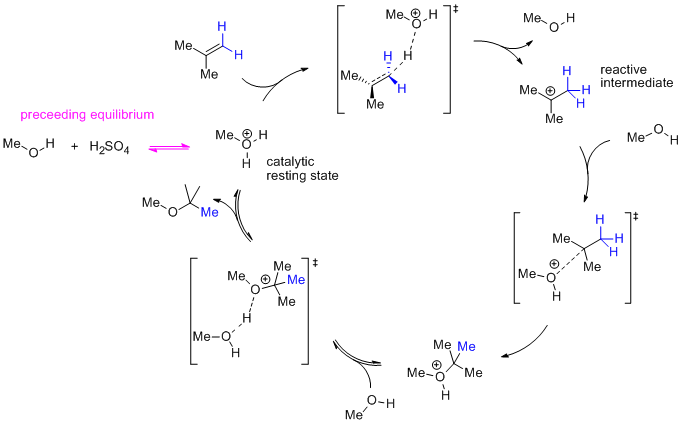 For simplicity and sufficiently accurate bond formation and breaking is indicated by arrows, omitting the transition states. Resulting a slightly simplified picture. However, the preceding equilibrium - as you noted - should not be omitted. This formulation of the mechanism is particularly important for many simple organic reactions, as it focusses entirely on the reactants and products (and to a minor extent on the reactive intermediates).

When it comes to more complex reactions, e.g. with asymmetric catalysts it is often much better to include the transition states.

From this it can also be seen, that the choice of sulfuric acid is somewhat arbitrary, as most acids would do the same. However, sulfuric acid is often used, since bisulfate and sulfate are very weak nucleophiles.

Additional note
In all schemes only the most likely path is shown. Any possible side reactions, like concerted [2+2] cycloaddition, have been omitted.

4
How is it possible, that the hydrolysis of ethers proceed via a SN2 mechanism?
6
Diethyl Ether reaction mechanism
10
Mechanism of the oxidation of alcohols with KMnO4
6
Why can alkoxides leave in the E1cb mechanism?
1
Acid Catalysed Ring Expansion – Mechanism?
1
What are the products of the reaction of methoxypropane with HBr?
8
Why does a proton prefer to attack a double bond instead of protonating an alcohol in a reaction of unsaturated alcohol with sulphuric acid?
12
Mechanism for the addition of hydrogen iodide to 3,3‐dimethylbut‐1‐yne