How to understand the chemical formula of Prussian blue complex w.r.t its crystal structure?

Note: Just to be clear, I do not refer to "complex molecules" (i.e. "complex" as "complicated"), but to actual complexes.

I am trying to understand the structure of Prussian Blue based on its chemical formula (I ultimately want to explain why it is blue, but this is probably not relevant to this question). This formula is

Now, having pretty much no experience with complexes, I would read this formula such that for every four $\ce{Fe(III)}$s, there are three $\ce{Fe(CN)6}$s – like this:

So far, so good. But I am confused to how this relates to the actual 3-dimensional structure of Prussian Blue which apparently is something like this: 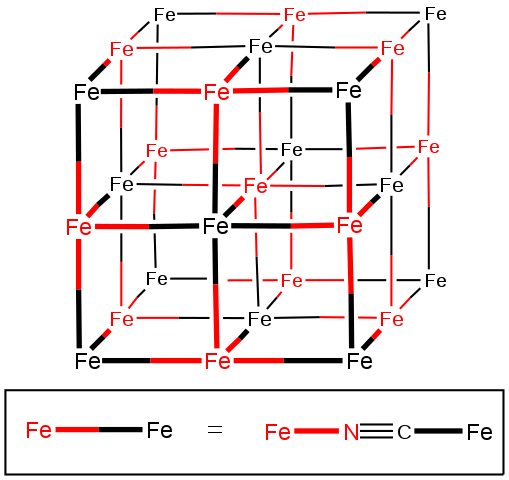 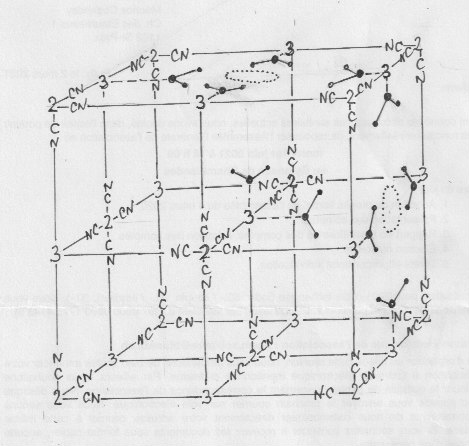 44
Carbon atoms at the edge of a diamond
3
How do counter-ions influence the color of coordination compounds?

7
How do you determine a chemical formula given the molecule's crystal structure?
44
Carbon atoms at the edge of a diamond
4
Why does phosphorus give a free electron in silicon doping?
11
Bonding in alkali metal complexes
12
Software to assist drawing of complex, three-dimensional skeletal formula from scratch or from existing crystal structure
8
Why can't ligands with "locked structures" undergo chelation?
5
What is the chemical composition of Ferrous Ferrocyanide?