The answer given in the exam solutions is

I am giving reasons for my answers and please correct me for the same.

B: elimination reaction not possible for weak nucleophiles so assuming strong nucleophile.

D: elimination reaction not possible (1$^0$ carbon and good leaving group) for weak nucleophiles so assuming strong nucleophiles. In my opinion C and D have same answers because statements doesn't have impact on answer.

EDIT: (For TRC's answer) For C: I agree that I had initially ignored the fact that an $\alpha\ce{-H}$ has been replaced by $\ce{D}$. But that doesn't imply E1cb mechanism. If E1cb occurs than also there will be no replacement of $\alpha\ce{-H}$ by $\ce{D}$ as shown below. Also $\ce{Br}$ is good leaving group than fluorine. 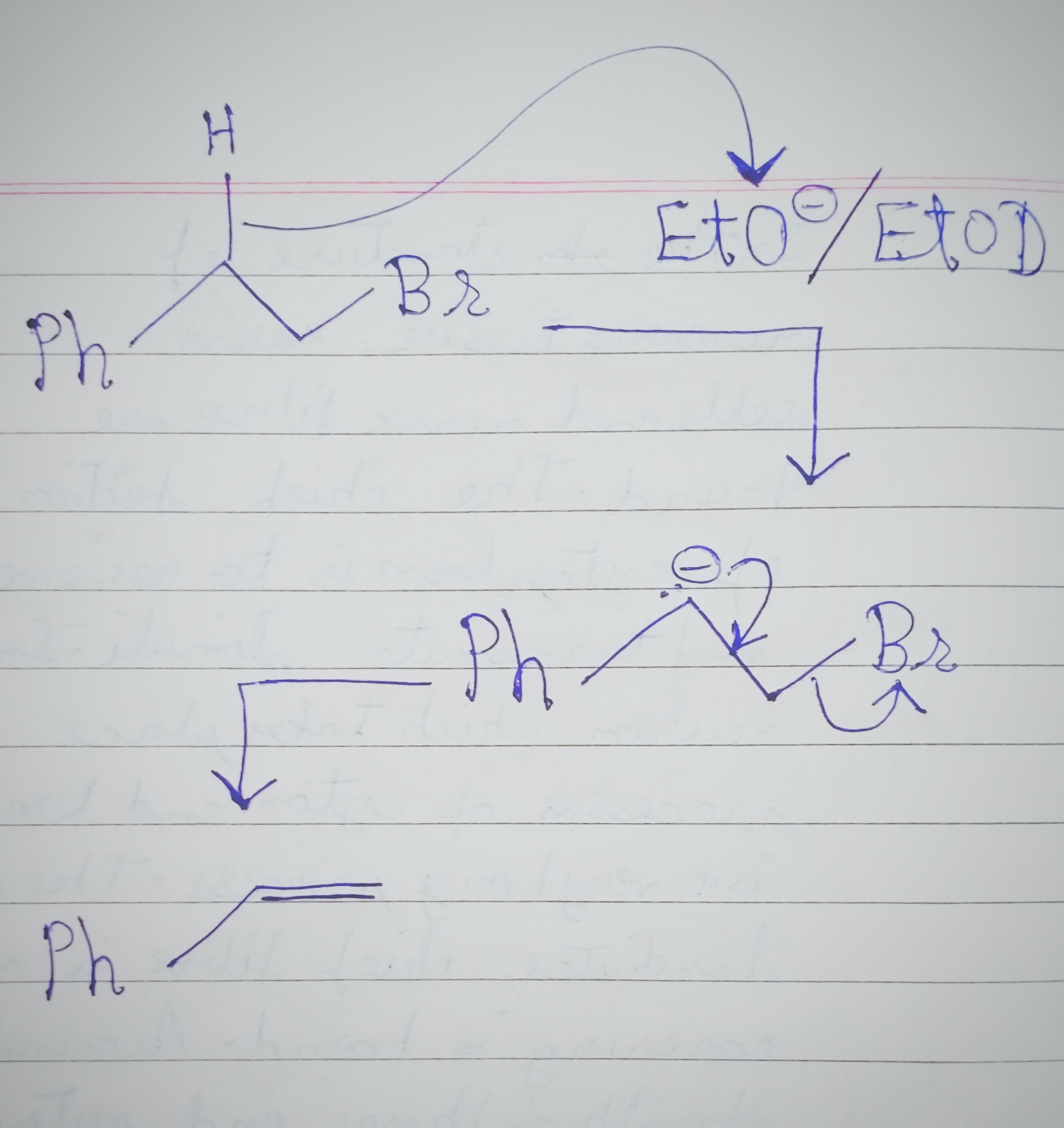 Lets say intermediate is formed by E1cb and reaction shown in image takes place (but it is weird and absurd thought). But than also E1cb and E2 will compete with winner being E2 according to conditions given in problem. Also if carbanion forms in equilibrium with (P), concentration of (P) will be much less and can't influence major product.

I hope you know the mechanisms of $\mathrm{E1}$ and $\mathrm{E2}$ reactions. In $\mathrm{E1}$ reaction, a carbocation is formed first, which is the rate-determining step (rds). Since rds does not involve breaking of $\ce{C-H}$ (or $\ce{C-D}$) bond, hence rate is same, regardless of whether $\alpha$ hydrogen is $\ce{H}$ or $\ce{D}$. So roughly equal amounts of both products are formed.

Now let's look at the options one by one -

B) Same reasoning as above.

C) Here we see an $\ce{\alpha-H}$ being replaced by $\ce{D}$, meaning a carbanion is formed as intermediate due to very strong base ethoxide. So it is following $\mathrm{E1cB}$ mechanism.

Disclaimer: I have been told earlier that the concept of rds is inaccurate by a very experienced user here. I agree with him. This answer is from a purely theoretical point of view, and strongly in the context of JEE only, where rds is useful and prevalent.

3
The dependency on electron density in the reactivity order of electrophilic and nucleophilic additions
4
E1CB mechanism with replacement of hydrogen step?

8
What is the difference between "bromine" and "bromine water" in their reaction with an alkene?
7
Addition of HBr to Vinyl bromide
6
Elimination reaction with 1,2-dibromo-4-methylcyclohexane
4
Second order reaction with different reactants