However, iodine is expensive and a way round that problem is to use a catalytic amount of iodide. The next phosphonium salt is formed slowly from benzyl bromide but the addition of a small amount of LiI speeds up the reaction considerably.

The iodide reacts as a better nucleophile than Ph3P and then as a better leaving group than Br–. Each iodide ion goes round and round many times as a nucleophilic catalyst. 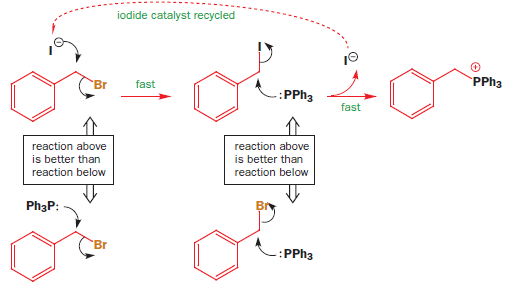 In a private conversation with ron I asked him how this catalyzing effect worked, he said that question would be more suited here and I agreed with him. It seems a bit strange at first that a strong nucleophile can also be a good leaving group (he really wants that nucleus, right, why would he leave?).

This is the explanation I came up with (probably wrong, but it is always better to first think self): Iodine is a stronger nucleophile here than bromine because of its higher energy HOMO, which lies closer to the energy of the $\ce{C-X}$ $\sigma^{*}$ (here $\ce{X}$ = $\ce{Br}$) LUMO. So it will react more rapidly than bromine, resulting in an equilibrium.

Now iodine is also a good leaving group, firstly because the $\ce{C-I}$ bond is higher is energy than the $\ce{C-Br}$ bond (less stable bond). And secondly (quoting Ron from another answer. Well explained, no need to rewrite it again): the larger the atom, the more polarizable it is. The more polarizable an atom the more stable is its corresponding anion because we have our charge spread out over a larger volume which is a stabilizing feature. So $\ce{I^{-}}$ will be more stable, making it easier for iodine to leave.

My thought was that iodine can easily knock of bromide but not remain in that position for very long (therefore the equilibrium). Now, if $\ce{PPh_3}$ happens to meet the benzyl iodide it is more eager to react with it than with the benzyl bromide (lower energy $\ce{C-X}$ $\sigma^{*}$). The resulting phosphonium salt is either to stable to be attacked by iodine again or precipitates out (or both?), so that benzyl bromide continues to be transformed into benzyl iodide.

Iodine is a stronger nucleophile here than bromine

I agree with your HOMO-LUMO reasoning, but this doesn't really matter too much. As long as iodide is a strong enough nucleophile to displace bromide at least some of the time, then the reaction we want to happen, will happen. Of course the more nucleophilic iodide is (here's where your HOMO-LUMO argument comes into play), the faster the desired reaction will happen.

I pretty much agree with the rest of what you say Jori, bit I might say it just a bit differently.

The reaction is run with just a small (catalytic) amount of iodide. As soon as iodide replaces a bromide (nucleophilic displacement), the iodide, being such a good leaving group, will now be quickly displaced by the weakly nucleophilic TPP. During this last step, iodide is regenerated and the cycle starts again.

Not the answer you're looking for? Browse other questions tagged reaction-mechanism catalysis or ask your own question.

7
What are the products in this SN1 reaction?
2
Why are more electronegative atoms better leaving groups?
2
Effect of pKa value of acid component in Mitsunobu Reaction?
1
Why would the hydrogen sulfide ion be a better nucleophile than a bromide ion?
2
How to order the reactivity of t-butyl iodide and neopentyl bromide for SN2
0
Will a crystal of iodine lower the yield of an Grignard Reaction
8
Comparing the rates of hydrolysis of different haloalkanes