I find these kind of problems really confusing for some reason, but I saw a way on the web and tried doing it that way:

But I am stuck here. Technically if I still consider the paper plane I considered while making the sawhorse projection (that is, Me and Ph are below plane of paper). During the elimination step, they are both still below the paper plane. So it seems it would give a cis-form.

But according to my book it would be trans.

If I again rotate about the sigma bond and get the other H to be anti to Br, then the Ph is on the opposite plane of the paper and would give trans. So is it just because trans is more stable than cis so this configuration would be eliminated more than the initial one, or is it something else?

I would appreciate if someone could help me out with this and also suggest a basic approach to solve these kind of reactions when the Fischer projection is given.

As you have mentioned, the basic Fischer operations are: Vertical positions are below the plane of paper and horizontal positions are Above the plane of paper, thus you have already remember that when working with Fischer projection. What you have to remember about chiral compounds are: If you switch two groups, you get the epimer and if you switch two other group on same chiral center, you got original compound back as demonstrated below with your compound of interest (2-bromo-1-phenylpropane):

The Cahn-Ingold-Prelog configuration of the $\ce{C}$2 is $(2S)$ while that of the epimer is $(2R)$ after first switch. You get back the original $(2S)$ configuration after the second switch. I want to do this because to get $\ce{H}$ and $\ce{Br}$ in anti-positions. The $\ce{C}$1 in the molecule is not chiral. Yet we'll do the same in case if you have to do this with a compound having two chiral centers (I'll replace one of $\ce{H}$s with a $\ce{R}$ group):

As shown, after first switch on both chiral centers, you get enantiomer (both chiral centers changed the stereochemistry). Yet, after second switch on both chiral centers should give the original compound. Make sure you change the groups as you want them to be. I put $\ce{Br}$ on the top and $\ce{H}$ on the bottom to get the best placement for the anti-situation. Yet, they are not in anti-positions since both are below the paper as shown in the second structure of the bottom line. To get into the anti-position, you must rotate the $\ce{C}$1 $180^\circ$ clockwise or anticlockwise as shown. Now $\ce{H}$ and $\ce{Br}$ in anti-positions so that the anti-elimination can occur. If that happens, the groups are in trans-positions, and the final product is Z-isomer in my case as shown. However there were two hydrogen in the $\ce{C}$1 in your case, and hence, more stable E-isomer would be the major product. Still, it would give you small amount of Z-isomer as minor product (you may see gauche-interaction between methyl and phenyl group in the anti-II conformer).

Note: If you know how to convert Fischer projections to Newman projections, it is easy to visualize and you may able to see why is the major product to be E-isomer. 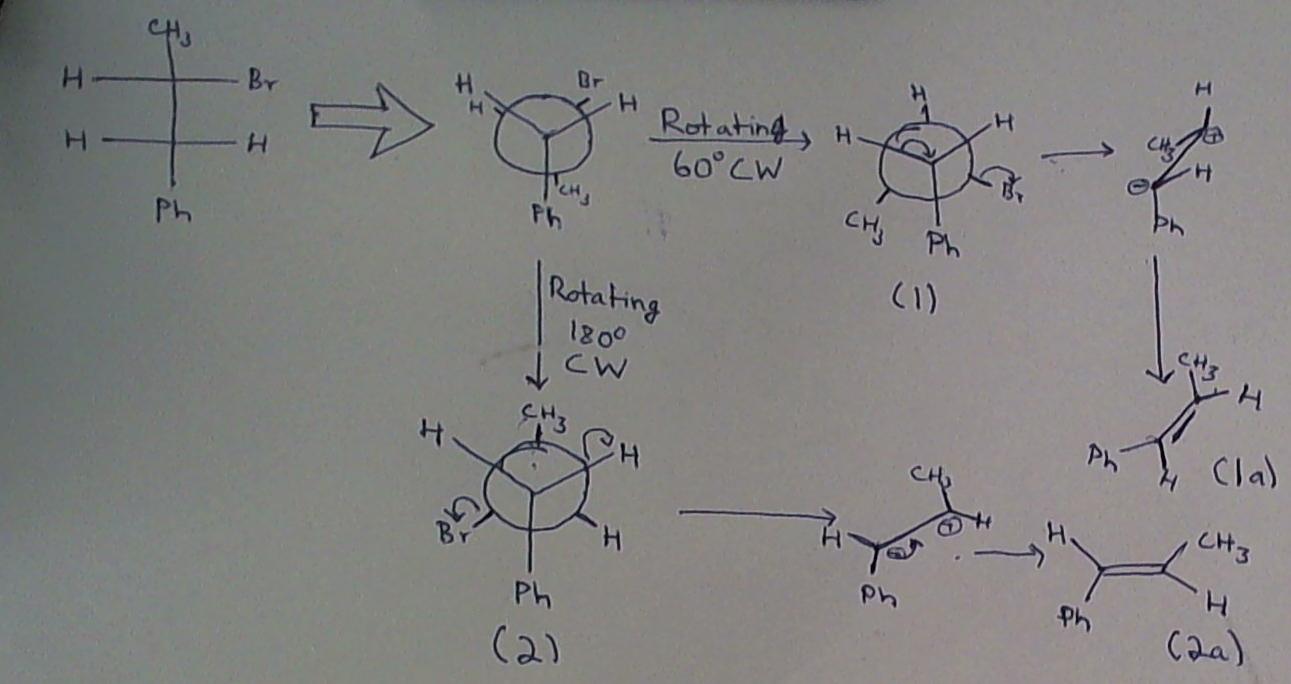 As you can see, we then have two final products depending upon which $\ce{H}$ is eliminated. From the image 1a is cis and 2a is trans. Now, how do we decide which one is the major product?

This can be based on looking at the stability of the transition state. This means we have to compare 1 and 2 to see which is more likely to be observed. As you can see 1 is a staggered configuration with the $\ce{-CH3}$ near the $\ce{-Ph}$. This means that there is some steric hinderance with the actual transition state that is observed. However, in 2, the $\ce{-CH3}$ is opposite the $\ce{-Ph}$, which leads to much lower steric hinderance. Therefore, the reaction pathway 2 is preferred over reaction pathway 1.

This means that the major product in this reaction would be 2a, which is the trans product.

Not the answer you're looking for? Browse other questions tagged organic-chemistry reaction-mechanism stereochemistry elimination cis-trans-isomerism or ask your own question.

7
Why unsaturated fats are usually cis?
2
Inversion of Configuration - Opening of Epoxide
1
Fischer Projections confusion
5
Determination of (R) and (S) configurations from a Haworth projection
2
How to draw Fischer projections for carbon chain having more than two carbons?
3
Why is this β hydrogen in trans position to the leaving group?
0
Fischer projections
4
Why does d/l-2,3-dibromobutane on reaction with NaI/acetone give cis-2-butene?