Is "Sulfuric acid... makes a poor electrolyte... very little of it will dissociate into ions" really true? What does that actually mean?

While researching chromate conversion coating for edits to this answer in Space Exploration SE, I came upon the following passage in Corrosion Resistance of Stainless Steel to Sulfuric Acid

Sulfuric acid is quite corrosive in water although it makes a poor electrolyte due to the fact that very little of it will dissociate into ions, according to Chemical Land 21’s description of sulfuric acid. The concentration of the acid is what determines its corrosive effectiveness, as British Stainless Steel Association (BSSA) explains. Most types of stainless steel can resist low or high concentrations, but it will attack the metal at intermediate temperatures. The concentration is affected by temperature.

In spite of the viscosity of the acid, the effective conductivities of the $\ce{H3SO4+}$ and $\ce{HSO4-}$ ions are high due to an intramolecular proton-switch mechanism (analogous to the Grotthuss mechanism in water), making sulfuric acid a good conductor of electricity. It is also an excellent solvent for many reactions.

Question: So one source explains that "Sulfuric acid is... a poor electrolyte due to the fact that very little of it will dissociate into ions", and the other seems to suggest that the "effective electrical conductivities" of the resulting ions are high "making sulfuric acid a good conductor of electricity". Is the fact that these appear to disagree to me due to my failure to understand what each means, or is one incorrect or at least incomplete?

The best known conducting aqueous solutions are that of strong acids in water because the hydronium ion (=protonated water) has the highest electrical conductivity known today. The infinite dilution conductivity of of hydronium ion are compared below from the Book Chapter "Proton Transfer Reactions and Kinetics in Water" by Stillingerenter. The units are cm$^2$/ohm equivalents. As you can see, the best conducting ions in water are the hydronium ion and the hydroxide ion. The "rest" of the ions are nowhere close.

So, when people say good or poor aqueous electrolytes, these are all relative terms. You can choose these above values as your measuring bar. Dilute sulfuric acid in water therefore a very good conductor with respect to other salt solutions because it furnishes "protons" in water.

When it comes to the conductivity pure sulfuric acid, it will be an apple to orange comparison with its aqueous solution. There is no water (or very little), small amount of hydronium ions. The current carrying ions are now different. Look at the conductance (reciprocal of ohms, the old paper labels the y axis as conductivity) as a function of sulfuric acid concentration, it follows a very non-linear behavior and its resistance is relative high as compared to aqueous solution. 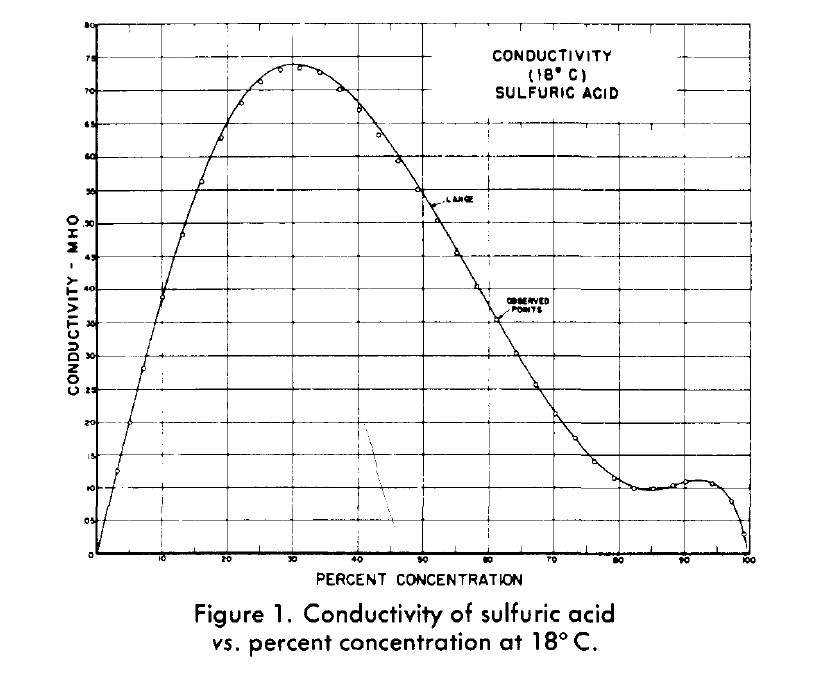 The conductivity might be viewed relative to other electrolytes and by concentration.

However, when you start a car, consider that a battery weighing perhaps 20 kg, with about seven liters of 35% $\ce{H2SO4}$, provides between 100 and 200 amps to turn over a four or six cylinder Otto-cycle engine... so $\ce{H2SO4}$ must be at least a fairly good conductor.

The apparent contradiction is due to the fact that none are absolute statements and to a misunderstanding of the term electrolyte.

The dissociation of sulphuric acid is concentration dependent, so more ions are in solutions at lower concentration.

Beside this, the second statement refers to a mechanism of conduction that is not general for ions in solution, namely proton exchange between anions. This intermolecular process, absent in, e.g. a NaCl solution, is an additional channel for the current flow. You can hypothetically think of not moving anions, still current can flow by the above protons exchange.

This nevertheless requires enough ions and a relative low distance between them.

As a result, the conductivity peaks at medium-low concentration, as in the graph you have attached.

In fact, a substance can be a relatively poor electrolyte in the sense that its dissociation is far then complete. However, as in the current case, its conductivity can be relatively high, at least higher than expected.

Not the answer you're looking for? Browse other questions tagged acid-base aqueous-solution conductivity or ask your own question.

22
Conductivity as a function of acid concentration
18
Why does the graph of the electrical conductivity of sulfuric acid/water solutions have this knee in the ~85%-~92% range?
9
Details of what actually happens in cold sulfuric acid between 80 and 90%; what molecular changes cause the viscosity to skyrocket?

0
What does 0.12 N mean on a bottle of sulfuric acid?
3
How is the dissolution of acetic acid that makes its aqueous solution a poor electrolyte?
8
Weird Wikipedia Section on Oxidizing Behavior of Nitric and Sulfuric Acids