What does the state of a substance at a specific T and P mean?

From the phase diagram of water, we see that water is a liquid at 20°C, 1 atm. The state of the water at 20°C, 1 atm is liquid. But there is actually also a water vapor in equilibrium with liquid water. What is the definition of “the state of a substance at a specific temperature and pressure?”

I will start by addressing the posted question: the "state of a substance at a specific temperature and pressure" refers to "the most stable phase of the homogeneous substance at the specific p and T". The phase is indicated in the phase diagram by looking up the appropriate T,p point. At $\pu{20 ^\circ C}$ and 1 atm pressure that would be pure liquid water.

Now, addressing the confusion, the system you are referring to (with vapour) is not at 1 atm, at least not 1 atm of water vapour. You are probably thinking of a closed container partly occupied by liquid water and a mixed gas phase with contents under a pressure of 1 atm. Yes, the liquid water in the container will be in equilibrium with vapour (if the liquid has a volume smaller than the container's, and if the temperature is not too high, causing all of the water to form vapour). But the pressure of the water vapour (that is, its partial pressure) will not be 1 atm. It will be much less, closer to the ideal equilibrium vapour pressure of water at that temperature.

Note the question is similar that posed here, from which I borrow the following phase diagram (not of water): 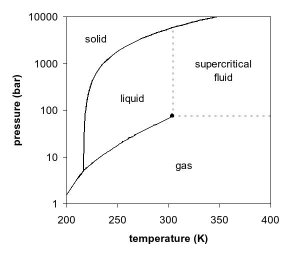 However, this had me slightly confused because in the situation initially described (at a point somewhere within the liquid region - NOT on the phase boundary) some vapour existed above the liquid in the container ...

Not the answer you're looking for? Browse other questions tagged equilibrium phase or ask your own question.

5
Lennard Jones liquid vapor phase transition
0
What is the specific heat of copper through its phases?
5
What are the spectroscopic signatures that differentiate triple state water from water at 1 atm?
5
Is a liquid in a container always in equilibrium with its vapour?
6
Clausius–Clapeyron relation for states of water and vapor
2
Is it possible to have only liquid in a closed container?
3
Vapor pressure vs. ambient pressure
4
What does the phase diagram mean by "liquid" at NTP? (The liquid and vapor coexist even when the situation is not on the curve)
1
Phase rule for a pure substance in vapor-liquid region
0
Does the vapor pressure of a substance depend on the presence of other gases?