Why does twistronic 'magic angle' graphene have only 180-degree symmetry?

From Graphene superconductors may be less exotic than physicists hoped[1]:

Excitement rose earlier this year with the discovery of superconductivity in a similar system[2]: three layers of graphene twisted at their own special angle. Both systems shared a rare, 180-degree rotational symmetry, which theorists argued could support an especially exotic form of superconductivity based on electron vortices known as skyrmions.

But the new incarnation of superconducting graphene appears strikingly plain.

Graphene has six-carbon rings like graphite, and is aromatic, so shouldn't it exhibit 60-degree symmetry or maybe 120?

And if that tl;dr is still too long so didn't read, translation and rotation are different animals, and hexagons are just plain weird.

From the link in the question:

Key to the skyrmion story is the 180-degree rotational symmetry that dictates electron transfers between the triangular sublattices. A rectangle has that same symmetry. A hexagon has it. A rectangular or hexagonal lattice has it. But stacking and twisting sheets of just about anything besides graphene breaks it. At last, Vishwanath and his colleagues were able to explain why the zoo of twisted lattices had failed to superconduct.

Graphene has six-carbon rings like graphite, and is aromatic, so shouldn't it exhibit 60-degree symmetry or maybe 120?

Yes, a single layer or stacked and aligned layers of a hexagonal lattice honeycomb Xene will have 120 or 60 degree symmetry, depending on if it's flat or buckled.

Graphene sheets are flat whereas most Xenes are buckled; go around a ring and the atoms alternate up-down-up-down-up-down out of plane.

The lattice (a mathematical thing indicating how you can translate the structure such that it looks the same) is hexagonal. A hexagonal lattice has 180 degree symmetry as well as 120 and 60 degree symmetry.

doesn't have to have the same symmetry as the lattice!

The crystal structure consists of the same group of atoms, the basis, positioned around each and every lattice point. This group of atoms therefore repeats indefinitely in three dimensions according to the arrangement of one of the Bravais lattices. The characteristic rotation and mirror symmetries of the unit cell is described by its crystallographic point group.

In 2D we enumerate the symmetries of the basis in what's called the "wallpaper group". See the many links in my Math SE question Are planar symmetry groups and wallpaper groups the same things? 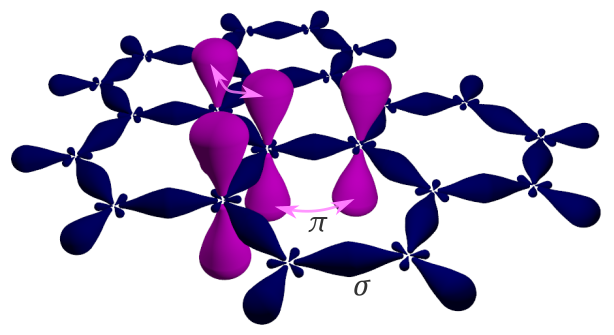 Sigma and pi bonds in graphene. Sigma bonds result from an overlap of sp2 hybrid orbitals, whereas pi bonds emerge from tunneling between the protruding pz orbitals. image source

Balls and sticks model of a single layer buckled hexagonal lattice of silicene, the buckling is marked by buckling height δ. The in-plane unit cell composed of two silicon atoms is highlighted. source

Not the answer you're looking for? Browse other questions tagged organic-chemistry theoretical-chemistry symmetry carbon-allotropes or ask your own question.

9
Why do we not see silicon in a structure like graphite?
7
Are all stable Xenes (graphene-like 2D honeycomb sheets) buckled?

6
Why does symmetry have to be maintained in molecular orbitals?
3
Why does benzene have a D6h point group?
5
Why doesn't 1,3-dichloro-2,4-dimethylcyclobutane have a plane of symmetry?
3
Why do square pyramidal molecules have only two vertical mirror planes?
10
Does trans-decalin really have a plane of symmetry?
0
Why does diamond have no molecular formula?
2
Why does dipole must lie parallel to a rotation symmetry axis?