What is role of copper powder, calcium chloride and cuprous chloride in the SN1 reaction of hydrochloric acid with propargylic alcohol?

For the synthesis of a 2H-cromene from a phenol I need to prepare 3-chloro-2-methyl-but-1-yne from the corresponding alcohol 2-methylbut-3-yn-2-ol. This reaction could be seen as a simple $S_\text N1$ substitution. 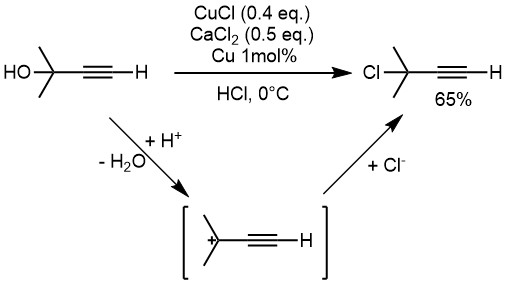 However it requires a catalytic amount of copper powder, and almost half equivalent of $\ce{CaCl2}$ and $\ce{CuCl}$, in addition to concentrated $\ce{HCl}$ at 0°C temperature. The authors say that these additives are necessary to avoid the formation of a series of subproducts but they don't talk about mechanistic explanation about the role of these additives. 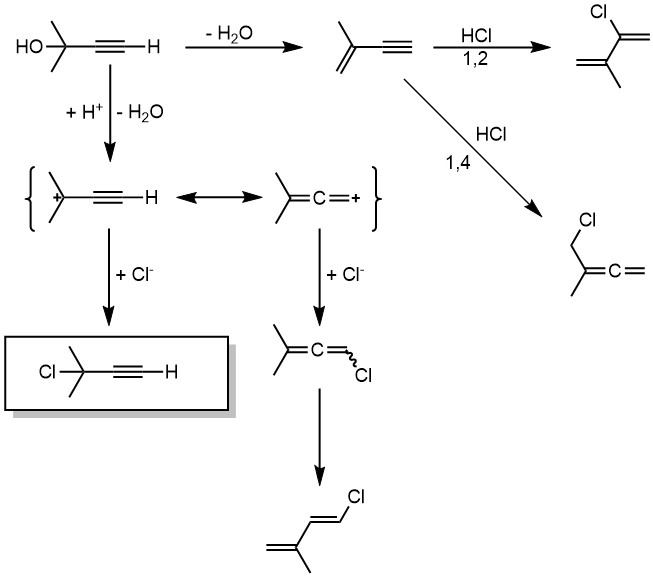 In my opinion, the formation of subproducts derived from the eneyne, obtained from dehydration, is suppressed using low temperature.

So the additives act probably on the carbocation. We may suppose the formation of a copper acetilyde that makes the resonance structure of carbocation less important. This is corroborated by the use of concentrated HCl during the work-up. But I don't understand how it is possible to form a copper acetilyde in acid media (usually it requires the presence of a base that deprotonate the alkyne).

The autors says that the formation of subproducts is more evident for propargylic alcohol that have a low solubilty in water (this is not the case of 2-methylbut-3-yn-2-ol).Regarding the presence of $\ce{CaCl2}$, I know that this salt is used in the distillation of some halocompounds because it interacts in some way with alcohol. So maybe $\ce{CaCl2}$ helps the solubilization of alcohol.

Can you please explain the role of each additives?

My take as to the likely role for a catalytic amount of copper powder, $\ce{CaCl2, HCl},$ and $\ce{CuCl}$ is as follows:

where the $\ce{Cl-}$ presence forms a soluble complex to keep the reaction reversible:

The first equation is an example of a working so-called redox couple with an associated presence of solvated electrons $\ce{(e-)}$ in the alcohol medium. Further, in the presence of H+ (from the $\ce{HCl}$), we have:

The formed hydrogen radical can further attack an organic complex resulting in either hydrogen or water with the introduction of an associated organic radical:

At low temperatures, the above reaction is moved to the right. A minor formation reaction is also possible:

where the above reaction could account for any reported associated formation of a metal acetylide.

Lastly, I suspect, presence of $\ce{CaCl2}$ adds $\ce{Cl-}$ and also removes water and further engages with the alcohol creating an addition compound.

I trust this helps.

Not the answer you're looking for? Browse other questions tagged organic-chemistry reaction-mechanism alcohols nucleophilic-substitution or ask your own question.

6
What are the products in this SN1 reaction?
3
Why is alcohol boiled with HBr for preparing alkyl bromide?
2
Gattermann-Koch reaction - Role of cuprous chloride
2
What happens when prop-2-en-1-ol reacts with concentrated hydrogen bromide
3
Betaine HCl stomach pH
6
Why is the alkene a more stable species in this case?
1
Can chloride attack the carbonyl bond in formaldehyde in the reaction with hydrochloric acid?
1
Calcium carbonate and hydrochloric acid
0
Why does the reaction of the primary alcohol cyclopentylmethanol with hydrogen bromide follow SN1 mechanism?
2
Alkene reaction with acid via SN1 reaction