How to Experimentally Quantify the Response of a Receptor to a Ligand?

In medicinal chemistry, there are multiple reasons why one would want to experimentally determine the effect of a particular molecule on a receptor e.g. measuring how 'strongly' that molecule brings about a chemical response (an agonist) or how strongly it prevents a response (an antagonist).

If we were looking at an insulin receptor antagonist (for whatever reason), then it would be easy to quantify the strength of the antagonist by a simple blood test of the test subject (human or animal), to see how much insulin was present.

What happens when we're faced with a scenario inherently difficult to quantify? How do we measure the action of a drug then?

Say we've found a natural neurotransmitter receptor agonist and want to compare this to a synthetic drug of a similar nature. I'd struggle to see how we'd experimentally be able to analyse the amount of neurotransmitter present in the synapses in each of the cases to compare.

Do we then look at less direct, perhaps qualitative methods of analysis? Such as 'state of agitation' or 'how many times the subject's arm twitched in a minute'?

What you're asking about is a wide topic.

You have the basic ideas of agonist and antagonist, but there are also molecules called inverse agonists. Every receptor has some base level of activity, even without an agonist to activate them, or in the presence of an antagonist. Inverse agonists push this activity even lower. There are even "partial agonists" which are molecules that activate receptors, but not as well as the endogenous ligand, so act like competitive inhibitors because they occupy some of the receptors the endogenous ligand would have. In addition, the binding site is important. The endogenous ligand binds to a location called the orthosteric binding site, but other molecules may bind to other locations on the receptor. These are allosteric binding sites. Allosteric binders may activate or inhibit a receptor, but they may also be modulators. Modulators don't directly activate a receptor, but allow a stronger response when another ligand binds at the orthosteric site. Here's a schematic to help show how different types of ligand affect receptor activity. 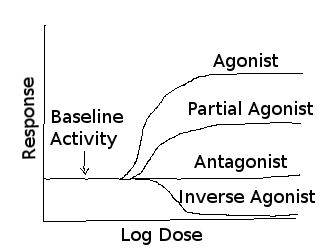 Anyway, ligands have two important properties, affinity and efficacy. Affinity is how strongly a ligand binds to a receptor, and efficacy is how the ligand affects the receptor's activity.

Before we can dig too deep into agonists or antagonists, we should think about receptor theory. Receptors, like all proteins, have complex 3 dimensional structure, or conformation. This conformation is affected by solvent, pH, temperature, and other factors, but always has some fluctuation. Classical receptor theory used a lock and key model, where an inactive receptor bound a ligand and became active. However, this did not explain the base activity and activity of inverse agonists, so an equilibrium based model was developed. Here, the population of receptors has an ensemble of conformation states, some of these are active. When an agonist binds, it drives the equilibrium of the population toward the active state by stabilizing the active conformation. This diagram shows a simplified example of how drugs affect the equilibrium. Ri is inactive receptor, Ra is active. D is drug. Ra leads to some activity, while Ra-D leads to strong activity. 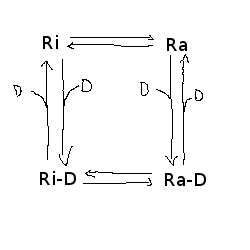 Affinity is relatively straightforward to measure becuase the same idea can be applied to almost any receptor-ligand system. Usually, a radiolabled version of the drug is added to a known amount of receptors in a binding assay. The goal is to determine a dissociation constant, Kd. Kd is used to quantify how well a ligand binds to a receptor, and smaller numbers are tighter binders.

So incubate the radioligand and receptor until some DR complex is formed, then seperate the bound and unbound ligand so you can measure D and DR. The seperation method is important because if it's too slow the DR complex will revert to D and R, creating inaccurate data. But this is commonly done using dialysis, centrifugation, and vacuum filtration. Dialysis works well when dissociation rate is slow. You put receptor in one side and drug in both sides. It's slow, but it's theoritically most accurate becuase you can measure the true steady state by taking an equal volume of solution from each side of the membrane without affecting equilibrium. But you also need a large supply of receptor and drug. Centrifugation works when you can immobilize the receptor on a large particle, usually you do this by using whole cells. You add an excess of of drug, then spin it down and take off the supernatent. Timing is still an issue and free drug can get caught in the pellet. Vacuum filtration is usually considered the best because it can seperate the components very quickly, by pulling the solution through a filter and trapping the receptor on the surface. However this requires specialized and expensive equipment. Once you measure bound and free drug at several concentrations, you can do a double reciprocal plot

Measuring efficacy is different because you need to choose an activity to measure. Idealy it will be objective and easy to quantify. If the receptor is an enzyme, you can measure its enzyme activity. If it activates a gene transcription factor, you can use cells modified to express green fluorescent protien or luciferase when that transcription factor is activated. If it's an ion channel you can measure a cell's membrane potential. If you cannot measure anything else, you can use behavioral assays. There are several assays used to measure mouse activity and try to get at certain aspects of their brain and are often used to study depression and other mental illnesses. These are subjective. Efficacy is quantified by EC50, the concentration at which response is half of maximum response. Smaller EC50s are more efficacious.

This field is much much larger than my answer. For more you should read this article : http://www.ncbi.nlm.nih.gov/pubmed/15063082

3
How do the fields of medicinal chemistry, pharmaceutical chemistry, pharmacy, and pharmacology differ?
4
How does the acidity of soft drinks not affect certain drugs, such as opiates? What about drugs and stomach acid?
4
How do water insoluble medications get absorbed in the blood stream?
1
How does gefitinib affect the EGFR(ecptor) and why is there relapse
0
What is the meaning of the slope in a graded dose-response curve?
5
How are the toxic components in a mixture identified?